I’m going to try something new and somewhat random today. After every Colts game for the rest of the season, I’m going to do a quick blog post. Now, for those of you who hate the football stuff, bear with me. It’s not going to be your traditional game recap. There are lots of people who do that – people who know what they’re doing, what the numbers mean, and who get paid to do that sort of thing. Me? I have no idea what I’m doing, I pretty much only know what the final score means (And downs. I’ve got the downs down.), and – sadly – I don’t have access to the locker room or a paycheck.

No, I want to do a recap of a different sort, one that I hope will shed a little light into the mind of a female fan. Hopefully you’ll learn a little something that you didn’t know. Maybe I’ll convert one or two of you to the sideline with me. If nothing else, I hope it entertains you a bit. Or maybe it will be a giant flop and I’ll never attempt it again.

I plan to post them the day after the game, so it will be somewhat ramble-y and very unedited. (Could I sell this series any better?) You’ve been warned. So follow me to Houston.

Thursday night games mean watching from home in yoga pants. Even if they weren’t in Houston, home night games are nearly impossible for us with kids. These night games are killer in general. They fall smack in the middle of when we should be getting kids ready for the next day and off to bed. Elena could care less and is generally happy that we’re distracted. (Oh, my iPhone? I’m not supposed to be on it at 10 p.m. on a school night? I completely forgot!) Eli loves any excuse to skip out on bedtime, so he pretends to be really into the game, which means he’s reenacting every catch and tackle, standing directly in front of the television during field goal attempts, and generally acting a fool. And then there’s the endurance factor: the fourth quarter is way past my bedtime.

I almost always watch Colts game with an adult beverage. It makes the bad games bearable and the good games that much better. Last night I was drinking a 2013 Luzon Verde Jumilla, a Spanish red I picked up in Ohio. I don’t normally drink wine while watching football, but we’d had steak for dinner. I’d like to think my cup and choice of pour helped with the outcome of the game. 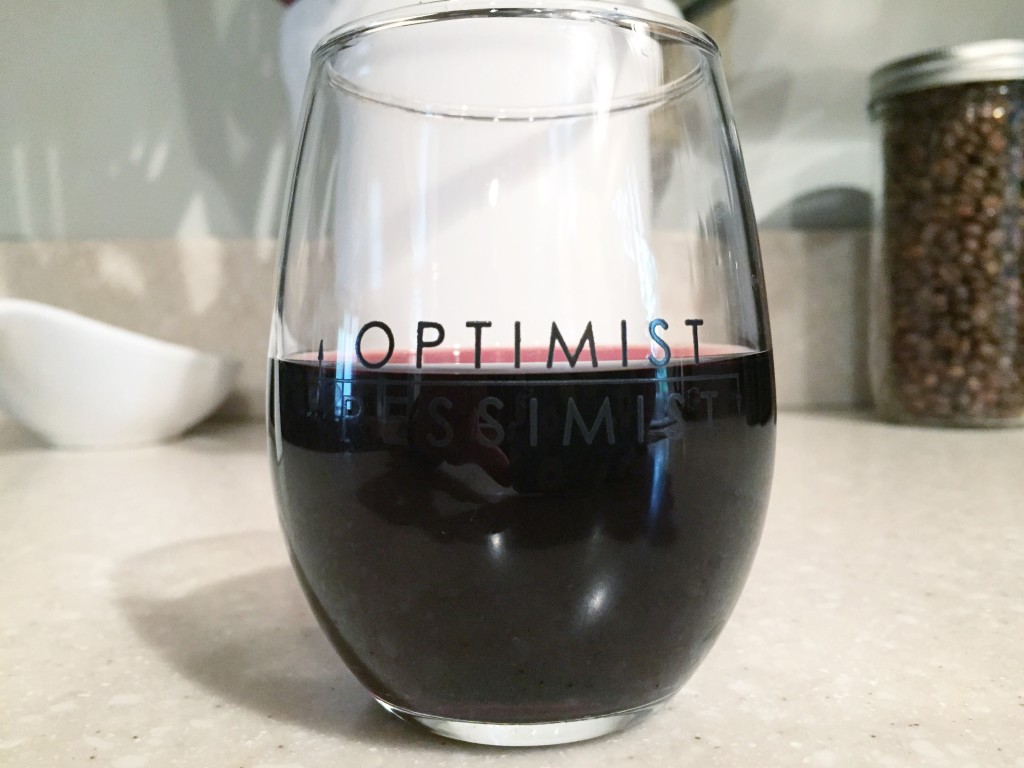 My cup might have declared me an optimist, but I was very pessimistic about this game going in. Andrew Luck was out with a shoulder injury for the second game in a row. (He’s also my starting quarterback in my fantasy league, which doesn’t help my mindset.) Matt Hasselbeck would start for the Colts. Now, he pulled us through to victory last week, but in the days leading up to the game he’d been very sick with a bacterial infection. In his own words, there was “lots of stuff coming out of the attic, then a lot of stuff coming out the basement.” So not the way you want to go into Houston and face defensive powerhouse J.J. Watt and company.

While you can never know how these things are going to end until the clock ticks down, it was pretty clear that we (mostly) had our shit together and Houston did not. They’ve had a little confusion about who is their starting quarterback, flip-flopping between Brian Hoyer and Ryan Mallett. Mallett started last night, and Mike and I were both dumbfounded when he took what looked to be a fairly paltry hit by NFL standards and proceeded to take himself out of the game for a play. This is not a thing quarterbacks do. Just watch any clip of Ben Roethlisberger. So Hoyer comes in and proceeds to play well. Coach leaves him in. Mallett tries to go back in without coach’s blessing. Coach puts the big fat kibosh on that. Mallett spends the rest of the game on the sideline, alternating between pissed and petulant.

And then on our side, after the game where Luck has to sit and watch another quarterback lead his team to victory, you see this: 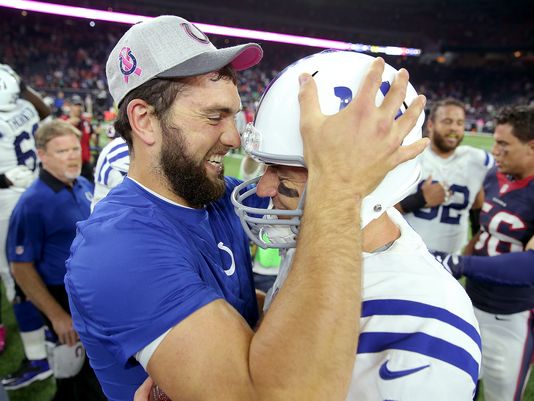 I just love both these guys, and I think this photo evokes an emotion in me that helps explain why I think the Colts are special. Every team has issues and a little bit of drama. Not every teammate is a good guy. But I think, in general, the Colts make it a priority to build a team that values faith and family, a team that believes in each other. That makes moments like this possible, and moments like we witnessed on the Texans sideline inexcusable.

It takes a special person to be a backup quarterback, especially a backup to the game’s greats … your Bradys, Mannings and Andrew Lucks. They know going in that if they’re playing it’s because something bad has happened to the franchise guy. They know that every one of their team’s fans are wishing he wasn’t playing. Matt Hasselbeck started his career backing up Brett Favre, but he hasn’t always been the second guy. He spent several seasons as the starter in Seattle, taking them all the way to the Super Bowl. It can’t be easy to finish your career as the backup. It has to be even harder to do it with the grace and leadership he shows as a Colt. We’re lucky to have him.

We have ten days between now and the next game, when we face the devil incarnate/inhoodie, Bill Belachick, and the New England Patriots. Until then I’ll enjoy this improbable win streak. Go Colts!