Welcome back to my weekly Indianapolis Colts recap. As I feared, this week’s post wasn’t nearly as much fun to write as last week’s. So let’s just make like a Band-aid and rip this puppy off. 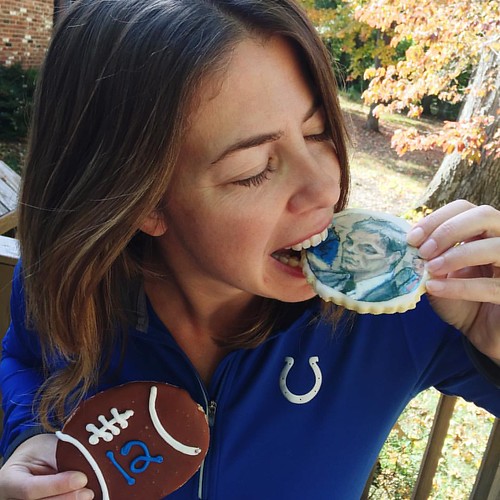 Once again, I was watching from home. I was asked multiple times last week if I’d be at the game. Even if it wasn’t for the late start time, I knew I wanted to watch this one in the privacy of my own home, with my own people. I envisioned lots of pacing and screaming. I was right on both accounts. It did make me mad to see the mass exodus of fans early in the fourth quarter. Had I been there, I would’ve stayed until the Bill Belachick sang.

Perhaps this was the first of many mistakes of the evening: I didn’t have a drop of alcohol the entire game. To be honest, my stomach wasn’t right all day. I’d love to say I was under the weather, but I honestly think I was just that nervous about the game. By the end of the first half I was finally feeling better. By the end of the third quarter I was seriously reconsidering my alcohol-free viewing choice.

There are two things that really bother me about this game.

The Patriots didn’t beat us, we lost the game just fine on our own. The Colts came out strong. We scored a touchdown on the opening drive for the first time in over 20 games. When the Patriots scored, we answered. I don’t know what Coach Pagano said in that locker room at halftime, but it must’ve amounted to the worst motivational speech in the history of football. When the Colts came back out it was a completely different team. Perhaps Pagano left for a corndog and the Ghost of Patriots Past paid a visit to the locker room instead. Every time it looked like maybe we’d exorcised the Ghost, he’d come back just in time to horrifically botch a third down attempt. Or a field goal.

The other thing that really irks me today is that once again we’ve created some kind of diversion that makes it easy for the Patriots and their fans to laugh at us. Had we continued to play with, as Pagano so eloquently put it a few weeks before, with “grit” and “intestinal fortitude,” we might’ve still lost the game … maybe even by the same score. But we could’ve held our heads up high, knowing we’d come close to beating one of the very best, if not the best, team in football. (Sorry, Tom Brady’s dad. No 60 points for you.) But no. We had to get cute with what I will remember for the rest of my living days as the most idiotic play call in NFL history. Before it was deflated footballs. Now we’re the Dolts.

I’m not going to get all Chicken Little here. I hate losing to the Patriots more than anything, but we’ll beat them another day. It’s just a game, and there are things I saw in this game that I did feel good about. Plus, I finally made some money on FanDuel. But unlike my very delicious Hideous Tom Brady cookie from Taylor’s Bakery, this game will leave a bad taste in my mouth for a long time.

Next week we host the New Orleans Saints at home, and praise Jesus – it’s a 1 o’clock game. Until then, go Colts!