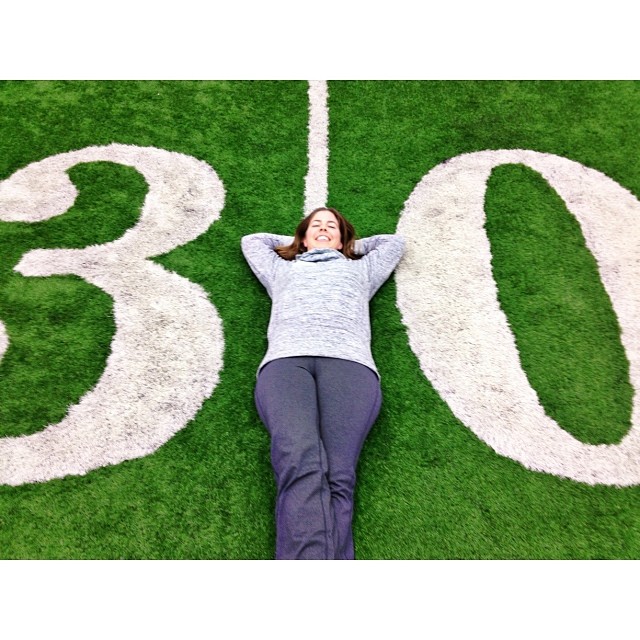 You may recall a post I did last year recapping my experience at the Indianapolis Colts Women’s 101 workshop. I had such a good time at the event that I knew I couldn’t let this year go by without attending Women’s 201.

This year I convinced my sister to go with me. She’s a big Colts fan as well and I knew she’d have a blast. Where Women’s 101 is geared toward learning the basic rules and plays of the game, Women’s 201 is all about getting sweaty on the same field where the Colts practice. After they fatten you up and slow you down with a big spread from Abuelo’s, they lead you into the practice facility. We were divided into smaller groups where we rotated through five stations, each manned by current Colts staff and players as well as alumni players. We tried our hands and feet at speed drills, running routes, sacking the quarterback, snapping the ball, and playing quarterback. Just a few things I learned about myself in Women’s 201:

Agility dummies are dumb. Or I’m not agile. One of the two. I nearly tripped, tripped, and/or rolled my ankle on them several times. If I were an NFL player I’d be the guy who broke his ankle on the first workout of training camp.

Don’t make fun of Darrius Heyward-Bey just before you attempt to run a route and catch a ball yourself. You will catch a ball right in your windpipe and feel like a dork in front of the Colts staff guy who suddenly has a laser-rocket arm.

It’s really hard to think of a sack dance on the fly. I wonder how much time these defensive players spend in front of a mirror perfecting their signature moves?

I couldn’t snap a ball if my life depended on it.

I couldn’t line up to receive a snap without giggling inappropriately if my life depended on it.

Khaled Holmes has absolutely no faith in me to follow directions, nor should he. But he was still game for a photo. It’s been a long time since I laughed that hard or had so much fun.

What I love about the 101 and 201 workshops is the group it brings together. The players and staff are so enthusiastic and fun to work with. They’ll answer any questions, no matter how silly you (or they) think they are. The women who attend come from all different backgrounds, ages and athletic ability, but they’re all there because they love football. Daniel Adongo, who up until July was a professional rugby player from Kenya. He joked that he was learning how to play football right along with us.

The sessions are over this year, but I can’t encourage you enough to look into them next year. Look for information on colts.com in late summer of 2014. If you love football as much as I do, it will be the best $70 you ever spend. Just don’t forget to invest in some ice packs and Aleve for the day after!