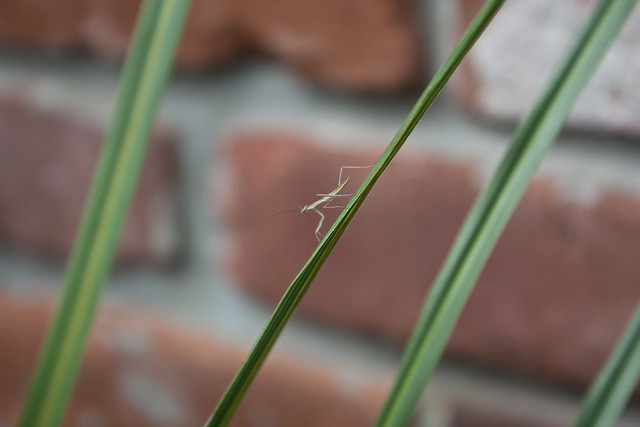 For his birthday last year, Eli received a praying mantis kit. It came with a handy pop-up viewing habitat, a little book about the praying mantis, and a certificate to mail away for your praying mantis egg case. Being August, and knowing that by the time the little mantis babies hatched fall would be well upon us, I set the kit away and made a note to order the egg case in the spring.

We were excited for our little project. We’ve raised swallowtail butterflies in a similar kit

and it provided hours of educational fun. Two egg cases arrived in late spring. Still not quite ready for what was sure to be a fun and educational summer project for Eli, I disguised them as best as I could in their packaging and shoved them in the back of the fridge to stave off hatching. I knew that if Mike discovered insect egg sacks in the same fridge that stored our food, I’d discover divorce papers soon after. I solved this problem by putting them behind the the perfectly acceptable eggs to be stored in the refrigerator of the chicken variety, knowing that no man in my life has ever found something directly behind any other object.

As I compiled THE LIST for our yet-to-be-savored, sure-to-be-awesome Anti-Boredom Summer, I made sure to put “Set Up Praying Mantis Habitat” first under the category of things that count as learning something. The first thing we learned is that preying mantis egg cases are high-maintenance. You can’t just throw them in the viewing habitat and call it a day. No, you have to find the perfect stick – a fabulous excuse to send a bored and chatty 7-year-old into the back yard by himself for an hour: No, that one’s too big. Nope, too small. Nope, too branch-y. Close, but not brown enough. Keep trying, buddy! Then you have to attach the egg cases to the sticks, with the super-helpful suggestion of super glue. In fairness to the kit manufacturer, this is a fantastic way to get the egg cases secured to the stick. It’s also a fantastic way for your kid to super glue his fingers together as well as walk away with a few other random objects securely attached to his hands and fingers for the next few days.

This filled up the better part of an afternoon. We were then prompted to be patient and wait, the concept of which is completely lost on children. Forget 30 days, how about we ask 30 times in one day when the praying mantis eggs will hatch? Thankfully, after 24 hours with no entertainment from the praying mantis end of the deal, Eli moved on. We marked the estimated hatching day on the calendar. The eggs and their habitat blended into the dining room scene, passed by often, ignored almost always. Or so I thought.

I’d written Mantis? in my weekly planner on the day of Thursday, July 2nd. On the preceding Tuesday afternoon, I cut through the dining room with a basketful of dirty laundry. I manage to ignore the dining room table mess 99.9% of the time – it’s where craft projects go to die – but something very tiny caught my eye. And then approximately 50 other tiny things caught my eye. Our bug babies had hatched! Only somehow, in the 30 boring days that had passed between setting up the eggs and now, Eli had decided to open up the habitat. And leave it open. Unlike human babies, who hatch and just lie there, praying mantis babies are no fools. They’re hungry and ready for adventure, which in this case meant exploring my dining room. They were everywhere. Did I mention that each egg case can hatch 50-250 insects?

Let me just tell you, there’s no better way to make a summer less boring than by having a dining room crawling with teeny, tiny praying mantises. I thanked sweet baby Jesus for the fact that Tuesdays are Mike’s poker night, and Eli and I set to work gathering up as many of the little guys as we could, scooping them up and setting them free outside. Gus lent a helping paw, only his catches ended up somewhere other than outside. Ahem. Elena, always helpful, ran screaming and shut herself in her bedroom. Despite the sheer number of escapees, we still had a decent number of insects left in the habitat. Thinking we could just throw some leaves in there and call it a day, Eli and I were more than a little dismayed to find out that praying mantises require a lot more effort than that. They needed live, tiny insects. And lots of them.

That’s when we tapped out. Turns out Eli prefers rollerblading shirtless through the neighborhood to learning about the life cycle of the praying mantis. And me? I prefer them outside. ALL OF THEM. I took the habitat into the garden and left it there overnight, open. For the next few days, I’d turn a corner and find a tiny mantis on a wall, or walk through the dining room and find one strolling amongst the craft graveyard on the table. I woke up once in a sweaty panic, sure I was covered in them. 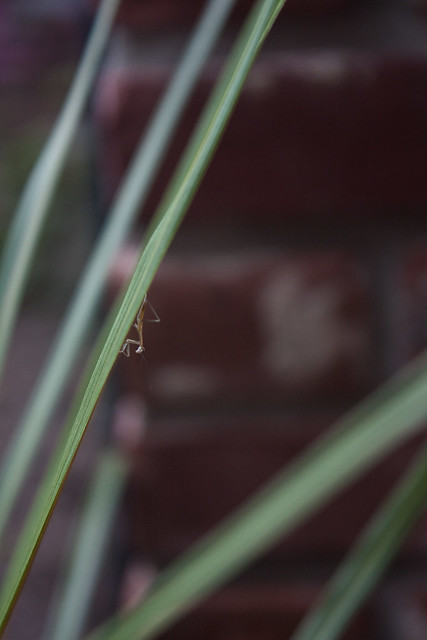 Much like the praying mantis project, our summer so far has been well-planned but unpredictable in the end. We struggle to find a routine, which is what makes summer so fantastic and frustrating for me. We get in a groove, and then there’s a long holiday weekend. Or Elena needs driven back and forth to camp downtown everyday, and Eli decides he’s the kind of kid that gets carsick now. It’s the middle of July and we should be languishing by the pool. Instead it’s cold and rainy. I’ll wonder why I even bother, trying to balance fun and the normal rhythms of family life that keep us sane. And then Eli will learn a game of solitaire and beat us all. Or Elena will pick up her guitar and learn a song in an afternoon. And I’ll learn to keep my expectations in check and all future insect endeavors outside, where they belong.