Around the web, on Facebook and blogs everywhere, proud parents are documenting their children’s first days of school.  I’m not here to make fun of any of you that stood your children in front of your homes or the bus so you could take that picture.  I love seeing them in their new outfits or uniforms, smiling big and holding out their signs proclaiming the year and what grade they’re about to be in.  I looked at all of the pictures – yes, even your kid.  I just didn’t do it for my own.

I am the internet’s equivalent of the mom in the grungy bathrobe, cigarette dangling out of her mouth, chipped “World’s Best Mom” coffee cup in hand, shoving her kids out the door with her foot. 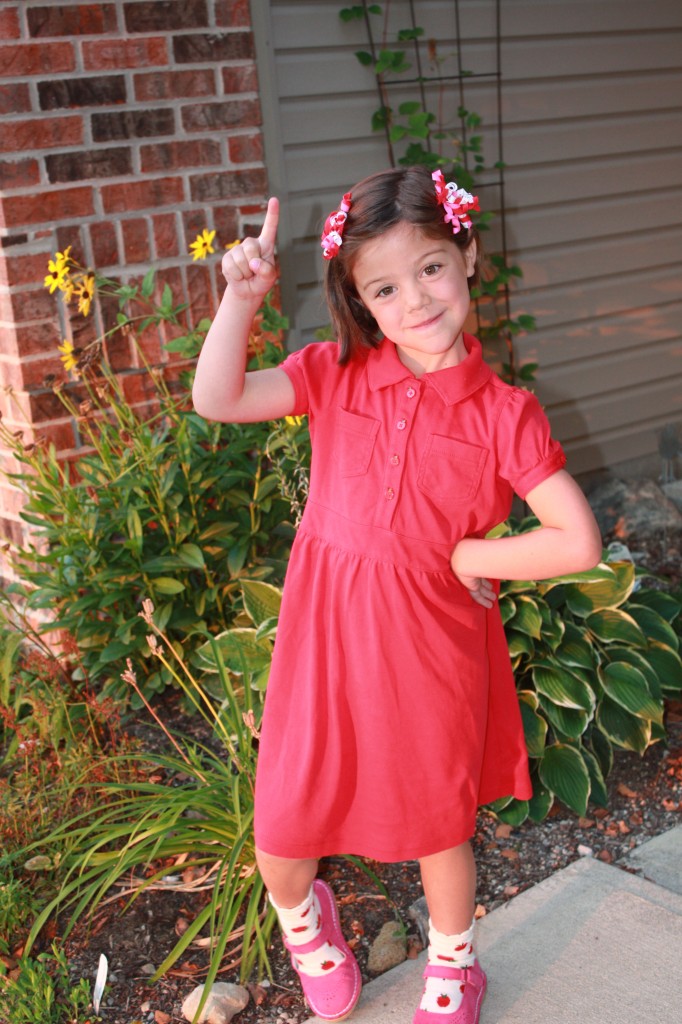 Last week we sent her off to fifth grade.  If I had presented her with a cone of treats at the bus stop, it would’ve quickly turned into the cone of shame and fodder for future therapy appointments.  No, I gave her the best gift of all and did not venture down to the bus stop with her in my pajamas.

Speaking of the bus stop, she has to be there at the butt crack of dawn.  Neither of us were in the mood for first day of school photos at 6:45 am.  I took some after, so surely that counts.

We are no longer in the realm of mom at the bus stop, daily notes to sign, and cheerful updates about our days.  We are in the realm of bus stop companions who can shave, lockers, multiple teachers, and measuring where your shorts hit your thigh with a ruler.

And poor Eli, the neglected second child.  He started school Wednesday with not so much as a new backpack, shirt or pencil.  He has the same teacher, the same room.  He didn’t get a sign, either.  Frankly, we are so confused about what he’s actually doing this year and next, I didn’t know what to write.  It’s his third year in the Children’s House at his Montessori school.  Technically this is his kindergarten year in Montessori.  With his late summer birthday and a slew of other factors, though, odds are good that he’ll repeat kindergarten again next year in our public school system.

Somehow having him stand in the front yard in the same football jersey he’s worn all summer holding a sign that simply said, “School!” seemed pointless.  If he ever asks about what happened to his first day of school picture of 2012, I will tell him we took that year off of school to make potions and ride around on unicorns.  The only rule of that magical school was that we weren’t allowed to take photos.  Or we’ll just substitute this photo instead, mostly because it never fails to make me laugh and it pretty much sums up how he’ll feel about my poor first-day-of-school-documentation efforts in 20 years: (For the purpose of future inquiries, Eli is trying to show me how a certain injured finger of his feeling much better now.)

I know myself, and I know in the age of Facebook and Pinterest that even the simplest milestone can be turned into a major event requiring chalkboard paint and homemade banners.  I love it, I really do, but I’m also trying to be better at realizing that not every single life moment needs to be styled and captured.  I love that so much of my children’s lives have been documented online, both the big moments and the simplest everyday ones.  They’re my virtual scrapbooks and I treasure them.  But I’m also reminding myself that just because it didn’t get shared and liked on Instagram doesn’t mean that it didn’t happen, or that it wasn’t special enough.

Another milestone will come along and I’ll whip out my camera and snap away.  That’s the thing about life with kids … there’s always something to celebrate.  Or document purely for humiliation purposes at their wedding.  But for Back to School 2012 for the Six family?  It will just have to be this:

They went to school. It was good. We had ice cream. The end.