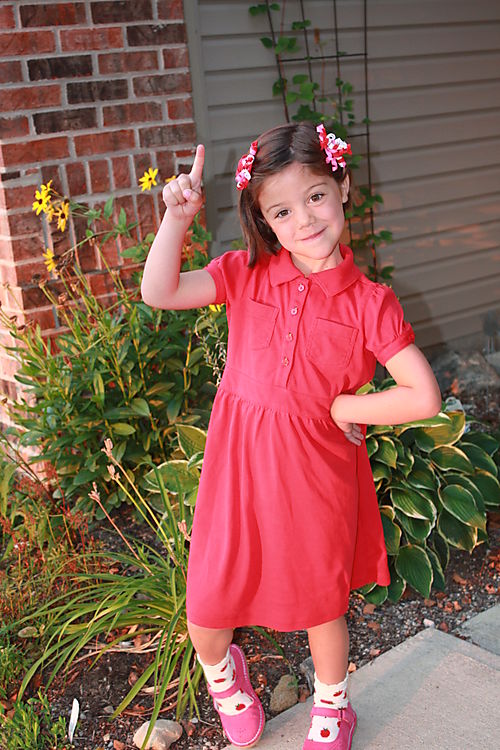 Like Elena's favorite storybook character at the moment, Junie B. Jones, she is officially a first grader.  Her first full day was a few days after we returned from the beach.  We had a special girl's evening out before school so she could choose a new dress for school.  She picked this one because it had apple buttons, which she deemed the most appropriate for the occasion.  She did her hair all by herself, too.

Elena is still going to the Montessori School in Westfield, so we have quite a hike to get out there.  We have to leave by 7:20 a.m. to have her there by 7:50.  But we love her school, so I try not to dwell on the commute.  She's in a new room this year, Elementary 1, with Mrs. Lohrstorfer and Mr. Wissman.  Elena likes them both, but thinks it's pretty cool to have her first male teacher.  She says he always makes her feel better when she's feeling sad.

After picking her up her first day I surprised her with a schultute,  or a school cone.   The idea comes from a  German tradition of filling a cone with treats for children leaving behind the carefree days of kindergarten for the more serious days of elementary school.  The story goes that a magic tree would grow in the cellar or attic of a schoolhouse, and on the first day of school all good, hard-working first-graders would get to pluck a cone from the Zuckertutenbaum, or sugar-bag tree.  We're not German, but it seemed like a neat way to mark this special day.  Elena's cone was filled with random school supplies and gummi bears. 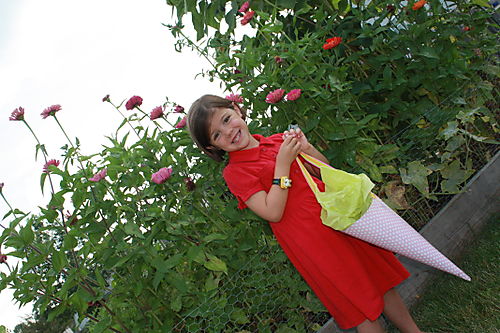 So far it's been a good year.  No calls from the teacher, no trips to the office.  Elena's in a mixed-age classroom (first through third graders), which I think will be a great environment for her.  She really looks up to the older kids and wants to emulate them, which I hope will encourage her to settle down a bit this year.  Meanwhile Eli and I are sitting here at home, wondering where the entertainment went!