As is the tradition around here, I give you a recap of Eli at fourteen months, just a few days shy of him turning fifteen months.  When I last wrote, he had just received his first real haircut.  Perhaps it is time for another?  Or at least a comb and some spit? 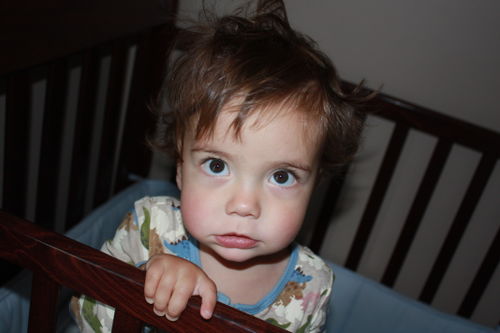 Walking is still a pipe dream.  Sometimes he gets really engrossed in something and he stands all by himself.  Then he realizes what he's doing and quickly sits on his heiny.  He doesn't want his secret out.  My theory is this:  he's 100% a momma's boy.  He's heard talk of this toddler program at Elena's school with Nov. 6th looming as his start date, provided he's walking by then.  The boy doesn't want to go, and he's found himself a loophole.

He can say Elena now and it melts my heart.

We read to him every night.  For the most part he seems to just tolerate it.  We could probably read the tax code to him and he'd sit there, as long as he had his milk and his Rita.  The other evening I settled down with a board book and started reading.  He pushed it away.  I tried again and he grabbed it and threw it on the floor.  Then he started lunging for the bookcase.  I put him down to see what he would do, and he promptly rummaged through his stack of books and pulled out "Big Red Barn."  When that was done he chose "The Going To Bed Book" and "Goodnight Moon."  Those, along with "The Very Hungry Caterpillar" are The Chosen.  We read them all day and every night.  Don't try to sneak anything else past him, it will not do.  But I don't mind one bit.

And with hats off to this website, I leave you with this photo and the only possible caption for it:

"I can has cheez sauce, momma?" 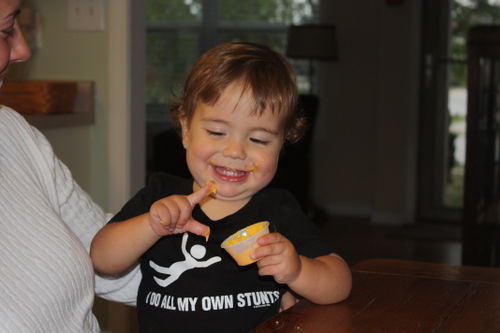