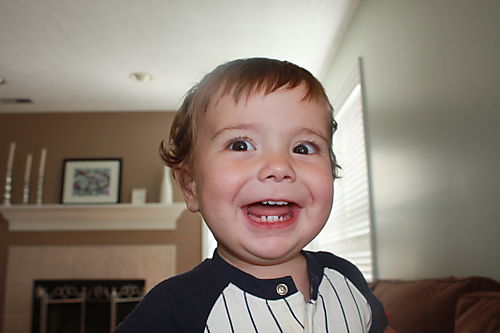 Seeing as how Eli is closer to 14 months that 13 months now, I thought I better squeeze this post in.  It's mostly for me, so that when his 13 years old and full of hormones I can look back and remember how sweet he was.  How I was the center of his little universe.  How nothing made him happier than showering me with big, sloppy, mouth-wide-open kisses.  How the thought of me leaving him in a room by his poor, little baby self so I could pee in privacy would nearly send him over the edge.  Yes, I would like to remember this someday AND remind him of it.  He won't believe me, but the internet will back me up.

You will not be surprised to hear that he is not walking.  You know that when he does I will not wait a week to post it, and there may even be a video.  I don't really care for the most part, I know he will do it in his own time.  I am a little tired of people giving me dirty looks for letting him crawl wherever and on whatever surface I please.  Those people don't have to carry his 25 lb heiny around.  I pretty much draw the line at hot coals and broken glass . . . anything else he's free to roam about on.

He says mama, dada, no, all done, and I think a version of Elena, though it's too close to "no no" to be sure.  He can crawl up the stairs in record speed and come right back down the proper way.  His favorite thing to do is to get up on the couch, stand on the arm of the couch, and pull on the blind cord.  I come along, tell him no, and put him on the floor.  Repeat about 1000x per day.  Elena and I like to call him Mr. Destructo.  His greatest satisfaction comes not from playing with toys, per se, but pulling them down from shelves and spreading them throughout the house.  If he can pull something down and it makes a giant crash and scatters in a million directions all the better.  Then he moves on to the next area of the house he's yet to destroy.  Mike or I put it all back together.  Repeat about 1000x per day.

I'll leave you with a photo of one of his quirkier habits.  He likes to put things in his mouth (cups, food, toys, etc) and shake them back and forth like a dog.  We had corn-on-the-cob the other night and it was most excellent for this.  Enjoy. 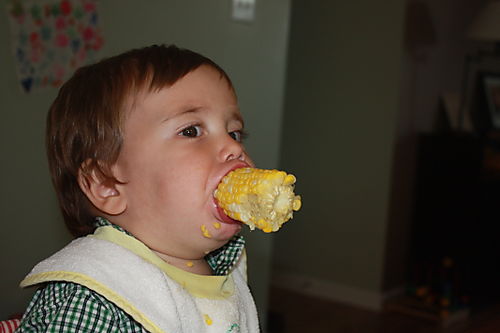