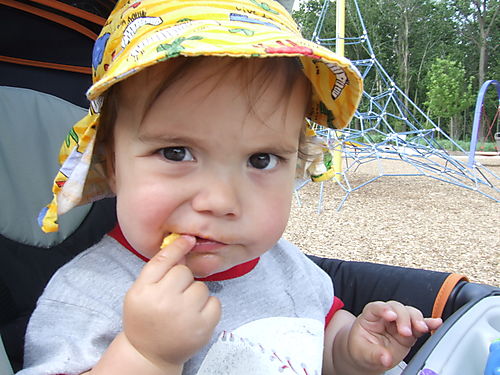 According to Super Baby Foods, 10 months is the age to introduce Cheetohs.  Who am I to argue?  This is Eli at 10 months, enjoying his favorite thing about life right now:  eating.  And rest assured, it's not a real cheetoh, it's a "healthy" version from Trader Joes.  The real cheetohs are for mommy only.  So what's new with my boy in the last month?

Let me begin by saying that this hasn't been the easiest stage of life.  Eli had 4 teeth come in at once, so my previously laid-back, easy baby was replaced by a super-cranky version.  I couldn't blame him, but that, combined with separation anxiety and a few days of inopportune blowouts, was enough to drive me to drink.  I saw a shirt a while back that said "Got My Mind On My Mommy And My Mommy On My Mind."  That would probably be our theme right now.  I thought it was hilarious back then, now I'm not so sure.  If I walk out of the room he goes bonkers.  We actually got paged from the church nursery the other weekend, which has never happened in our history of being parents.

He has figured out that he can move, though he must be extremely motivated.  By that I mean if it's not food on the floor or something of Elena's that's highly destructible (like her violin), it's just not worth it.  He doesn't crawl per se, but kind of fish flops his way around.

We weaned him off of his nighttime feeding(s), so we're now getting a good 10 or 11 hours of uninterrupted sleep.  The trade off is that he's ready to go for the day around 6 a.m.  Thank God for coffee and Matt Lauer.  Elena is such a late sleeper that most mornings I can get him back down for a nap and read the paper in peace before she's up for the day.  He's a champion napper, easy to put down and will usually take 2 naps about an hour and a half to 2 hours long.

As challenging as this age can be, I at least have the experience to know that good or bad, no phase lasts forever.  I also know that he's not going to be my sweet squishy baby who wants to be carried around for long.  Soon he'll be a toddler, ready to run and explore and leave my arms behind.  So in the meantime I'll just keep him close, and maybe bench press him a few times each day so when he does start walking I'll have some killer arms to show for all that love.