What is it about February? It’s the shortest month of the year, and yet it drags on forever. And it’s such a meh month. Meh weather, meh holiday, and for me this year, meh books. While I didn’t read anything I hated or couldn’t finish, there was only one book that I absolutely loved. The rest? Meh. But soldier on we will, because there are books to review and spring is on the horizon!

Kitchens of the Great Midwest

By the time Eva is a toddler, both her parents are gone. Her mother has run off with a sommelier, deciding motherhood is not her thing. Her father, a chef and lover of food, dies unexpectedly, leaving Eva to be raised by her aunt and uncle. Thinking her past is too painful a burden to bear, she is never told about her biological parents. Instead Eva grows up always feeling a little misplaced, and wondering where this passion for food and gift for cooking could’ve possibly come from. Each chapter in the book is told by someone who has played a part in Eva’s life in some way, and the focus always comes back to food.

I had impossibly high hopes for this book, and found myself slightly disappointed. I expected it to be as light and sweet as pie, but was surprised to find heavy and bitter bits mixed in. The story is compelling, and I became invested in the characters enough that I had to know how they all tied together. (And did anyone else who read it envision Eva played by Jennifer Lawrence?) I really wish the author would’ve given the reader more insight to Eva at the end of the book. I couldn’t help but feel a little unfulfilled at the end. Even with those reservations, I’d still recommend the book. I think it would make a good book club pick, and especially fun if you made some of the recipes in the book.

My Kitchen Year: 136 Recipes That Saved My Life

One day Ruth Reichl was at the helm of one of the oldest and most beloved food magazines of all time. The next day, Gourmet magazine was done and Reichl found herself without a job and lost. She got through that first year of grief and doubt by returning to her kitchen. Out of that year comes a lovely book, with gorgeous photos, short and poignant essays, and a collection of recipes. I really enjoyed reading this book in short bursts. It’s not a novel, and it’s more than a cookbook … and it works. I made the recipe for Fannie Farmer’s Overnight Yeasted Waffles from the book and it’s a keeper!

It seems that early 2016 is the year of elderly characters for me! This is the third book I read with an older character in a starring role. But while I may eventually forget Harriet Chance or Allan Karlsson, I will never, ever forget Ove as long as I live.

Ove is the curmudgeonly, easily angered neighbor nobody wants next door. How hard can it be to mind your own business and follow the rules? In this day and age, it’s apparently very hard for everyone but Ove. Underneath the gruff exterior, there lies a deep sadness in Ove. He grieves for the love of his life, and wants nothing more than to join her … if only everyone around him wouldn’t make it so bloody difficult! Ove’s plans and carefully constructed world come crashing down when a new family moves in next door. Between the bumbling husband, nosy wife, and the chatty young girls, Ove can’t find a moment’s peace. And that’s before the cat moves in.

How good was this book? When I realized I only had 1/3 of the book left to go, I momentarily panicked. I didn’t want it to be over. There were moments in the story when I guffawed (this may be the only time in my life when I laugh at a botched suicide attempt), only to be followed by tears a few chapters later. If you’re a fan of audio books, I highly, highly recommend you listen to this one. The narrator does a fantastic job with the dialogue and the many different characters. Just a warning though: when you do get to the end, make sure you’re somewhere with lots of tissue and the privacy to go into the ugly cry. A Man Called Ove is not only one of the best books I’ve read this year, it’s one of the best I’ve read ever.

Spark Joy: An Illustrated Master Class on the Art of Organizing and Tidying Up

Kondo’s follow up to her immensely popular book, The Life-Changing Magic of Tidying Up

, doesn’t so much pick up where Magic finished off as it fills in where it left readers hanging. Think of Spark Joy as a detailed handbook aimed at readers who read Magic but need more information and specific examples of how to go through the steps of tidying up. If you read Magic and feel like you “got it,” then you won’t find anything new here, other than some awkwardly cute illustrations about how to fold your clothes and organize your stuffed bunnies (for real). And if you nearly pulled an ocular muscle rolling your eyes at the suggestions for letting your socks breathe and thanking discarded items for their service, you probably want to skip this book as well. I think this book is best suited for those who haven’t read Magic, but don’t need much convincing as to why they should buy into Kondo’s methods of tidying up. Spark Joy jumps right in, giving readers a plan and a path to follow to turn their home from a place of disorder to a place of tidiness … and yes, joy.

The Book of Speculation

Simon Watson is stuck in a precarious situation, both in his mind and in his actual life. Struggling to make ends meet in his hometown’s small library, he is unable to move forward to make the necessary repairs to keep his childhood home from crumbling around him and eventually falling into the sea. When he mysteriously receives a very old book that seems to have some connection to his family’s past as members of a traveling carnival, he discovers a haunting fact: the women in his family (including his mother) always drown on July 24. With the date looming and his tarot card-reading sister acting stranger by the minute, Simon must find a way to end the curse before the house ends him and the water takes his sister.

Told in alternating perspectives from the past and the present, the story churns toward a climatic end. The deckled edges and illustrations give the reader a sense of what Simon’s book might’ve been like. If you enjoyed Sara Gruen’s Water for Elephants and feel that any good plot line can be improved with a touch of creepiness, you will like The Book of Speculation. This was the February selection for my neighborhood book club, and while not everybody loved it, it made for really deep and interesting discussion.

This Is Your Life, Harriet Chance!

Harriet Chance’s husband of more than 50 years, Bernard, has been dead 6 months, but he still can’t leave her alone. Not only does he keep reappearing at the most inopportune times, he’s booked an Alaskan cruise for them and then had the audacity to die! Against the wishes of her children, who think it will all be too much for her, Harriet goes on the cruise. From the very beginning things do not go well, and Harriet is forced to confront things about herself, her husband, her best friend and her children that she hoped to leave in the past.

Once again, this was a book that I thought would be more lighthearted than it actually was. If you want nothing but old-people shenanigans on a cruise, you may be disappointed. Once I let my preconceived notions go, I found a captivating story with interesting characters. I especially enjoyed watching Harriet’s relationship with her daughter evolve as they learn more about each other. Not my favorite book, by far, but a solid pick for a quick read.

by Andrea Lochen (My pick in the Modern Mrs. Darcy Reading Challenge for “A book you own but have never read.”)

It’s not so unusual for a child to have imaginary friends. It’s slightly unusual for those friends to be dinosaurs. And it’s flat out crazy for a mom to be able to see her child’s imaginary friends, right? That’s what Anna Jennings thinks, as she struggles to put what she sees into context with real life. Real life for Anna means starting from square one with nothing. A single mom to 4-year-old David, she’s out of work and money, living with her grandparents in their rural Wisconsin home. It’s where she’s always gone when things go wrong, and lots of things have gone wrong for Anna. Estranged from her mother, pregnant at 18, and now avoiding David’s mentally ill and unstable father. As Anna struggles to understand David’s vivid imagination and what it all means, she uncovers secrets about her own childhood and the imaginary friend that came in between Anna and her own mother.

It took me awhile to get into the story, but once I did I couldn’t put it down and stayed up way past my bedtime to finish it. This book fits my definition of a perfect summer/beach read: interesting, not too long, slightly quirky, and easily digestible.

Love the House You’re In: 40 Ways to Improve Your Home and Change Your Life

I’m about halfway through this book/guide from HGTV’s Paige Rein. It’s coming at the perfect time for me, as we’ve been in our home for 3 years now and we’re ready to invest some time and money in truly making it our own. I really appreciate the method the author takes by asking the reader to pause and take stock of what you love about your house, what you don’t like, and how you use the space. I’ll have a full review when I’m done, but as of now it looks like it’s going to be a great resource for home improvement and design.

When author Simon Goodman’s father passes away, he receives boxes upon boxes of his father’s papers. What he finds will lead him into in the world of stolen and looted art. Goodman’s great-grandparents were victims of Holocaust. Before World War II, the Guttmans were one of the most powerful banking families in Germany. Through the years they amassed a stunning collection of world class art, including works by Degas, Renoir and Botticelli. When the Nazis swept through Germany and the Netherlands, everything the Guttmans had was lost: their art, their property, and their lives.

Simon grew up knowing nothing of his family’s legacy. Beyond a few memories of hurried trips across Europe and rushed visits to one art museum and another, his father’s quest to find his family’s lost treasures was never spoken of. His father’s death ignites a passion in Simon to right a wrong, and to find justice not only for his family, but for all the Jews who were forced to sell or leave behind their precious family treasures.

The premise of the story is amazing. Learning of the ways property was forcibly taken from Jewish families will anger any reader, as will stories of how Jewish survivors were continually wronged and taken advantage of after the war. While Goodman has a very personal connection, I can’t help but wonder if the story couldn’t have been told better by another author. While fascinating, it read more like a personal journal than it did as a cohesive and attention-grabbing story.

What have you read and loved lately? 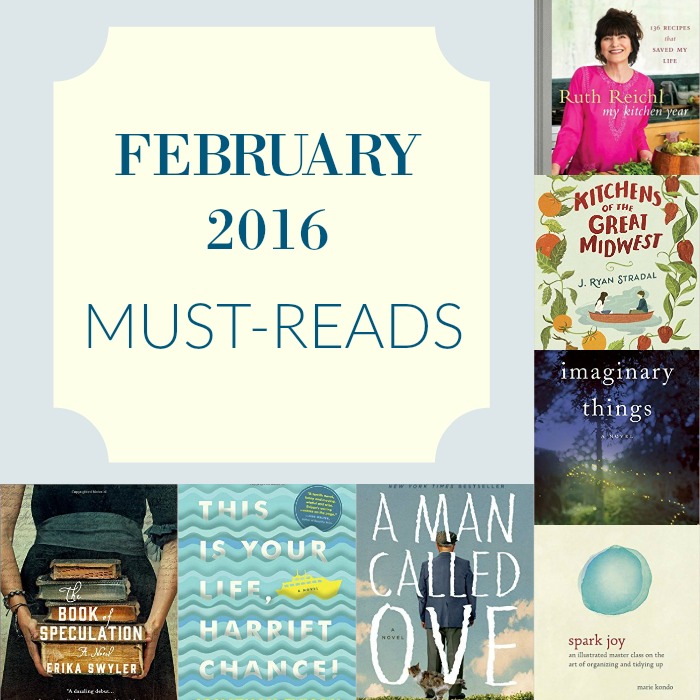