As we wrap up 2015 and I look back at the many books I read, I thought I would share my favorites by category instead of one big list. Today I’m sharing with you my favorite fiction reads this year. (Note: these are books I read in 2015, but not necessarily published in 2015.) Enjoy!

Reading this book, I envisioned the main character, Don Tillman, as a cross between Sheldon from Big Bang Theory and the Sherlock of Elementary. Don is a friendly yet frustrating and socially awkward genetics professor. He’s decided that it’s time to settle down, and in typical Don fashion there is a very logical and practical way to find the perfect partner: the Wife Project. Believing that statistically, there’s someone for everyone, he develops a survey to weed out the unsuitable candidates. (No vegetarians, chronically late women, smokers … the list goes on and on. And on.) Rosie certainly doesn’t make the cut, yet somehow Don finds himself wrapped up in all things Rosie, including a new project to help her find her biological father. These two characters couldn’t be more different, and yet I loved them both and rooted for them to end up together throughout the entire book. A really fun read that brought up some good discussions at book club about how much control we really have over our personality “quirks”, biological or otherwise.

This is the kind of book I love – great, relatable characters and a story that hooks you right from the beginning. Louisa is a fabulous British characters along the lines of Bridget Jones: witty, a little left-field, and often overlooked. She’s never left her little town, and the prospects of her life unfolding into something grand are dim. Tied down to a boyfriend that has bigger priorities and a family that depends on her for income, she’s forced to take a job as a caretaker for Will, a young quadriplegic. He wants to be taken care of about as much as she wants to be his caretaker. They find themselves both faced with what seem to be unsurmountable tasks. Can Louisa make Will see a purpose for living in this new body? And can Will make Louisa see a purpose for her life beyond the limits of her town and her family? A word to the wise: make sure you read the last chapter somewhere private with loads of tissues. I hope to read Moyes’ sequel, After You

I would never in a million years have picked up the first book in this series. I’m not much for science fiction, apocalyptic stories, or dystopian societies, of which Winters’ trilogy has touches of all. Winters was one of the authors at an author event I attended with Elena, and he read from The Last Policeman. I was hooked, and I had to see if it was as good in my hands as it was hearing him read the story aloud. Answer: yes. I tore through this series. The world is coming to an end and spiraling into chaos and lawlessness. Detective Hank Palace, like everyone, struggles with how best to spend his last days on earth. While nearly everyone around him has given up, he still feels pulled to do what he does best: take notes and solve crimes. I empathized with his inability to let go of the work he loves and his belief that just because the world is coming to an end, we don’t need to give up on purpose and caring.

We Are All Completely Beside Ourselves

This was my choice for  my neighborhood book club, and the discussion was fantastic. Feelings about the book were strong and clearly divided – either you loved it or hated it! I was told before reading this book simply to read it – don’t read too much about it, and definitely don’t read any reviews. I’ll tell you the same thing, as there is a plot twist that will have you flipping back to previous chapters furiously. Rosemary is living the typical Midwestern childhood with her parents, brother, and twin sister. She doesn’t realize there’s anything different about her or her family until her sister disappears with no warning and little explanation from her family. What I found most fascinating about this book was how a singular event can be experienced and interpreted so differently among the people who experience it together.

All the Light We Cannot See

Oh my goodness, did I love this book! This gets the vote for the best book I read in 2015. (Actually, I listened to it, which might have made it even a teensy bit better.) Set in World War II, Doerr tells the story of two children whose very different paths will meet in German-occupied France. Marie-Laure, blind from the age of six, lives with her father in France. Werner and his younger sister are orphans, living in a dismal German mining town. The lives of Marie and Werner, so far apart in distance and circumstance, mingle and separate in lovely detail, like a dance. They’ve both compensated for the things they’re missing in life by honing and perfecting the gifts they can control. For Marie it’s her other senses, while for Werner it’s his curiosity and studies. The author’s descriptions of what Marie can hear, smell and sense are so rich that you can feel them yourself. I feel as if I’ve read so many books with World War II as the backdrop that I’m a little put off on any books that fit in that category. If you feel that way, too, I understand … but don’t let this be the book you pass over!

The Storied Life of A. J. Fikry

This is one of those books that would be perfect to curl up with by the fire this winter. It’s a cozy little feel-good book, even if it doesn’t start out that way. A.J. Fikry is grumpy and in no mood for the Amelia, the new Knightly Press book rep, to peddle her wares. He knows what he likes and she doesn’t have it. He’s recently widowed and he has no patience for anything or anyone that attempts to move him out of his grief and anger. Things get worse for the small-town bookstore owner … sales are down and his prized possession, a rare book of Poe poems, is stolen. When someone leaves a baby at the store, he’s the least likely candidate to step in and take responsibility for her. And yet he does, and the effects baby Maya, and eventually Amelia, have on the cranky bookseller will melt your heart as much as they do his.

Everything I Never Told You

What looks like a normal, happy family on the outside quickly shatters on the inside when tragedy strikes. The Lees are a typical Midwestern family in most ways. Mom, dad, and three seemingly happy children. But it isn’t easy to be one of the only Asian families in town, isn’t easy to have mixed race parents, isn’t easy to have expectations on you to be the perfect daughter, isn’t easy to be the overlooked spare son or the ignored youngest daughter. It’s all too much for the oldest Lee child, Lydia. When she is found drowned in a nearby lake, the blame surfaces easily while the family’s secrets are pushed deeper. I ached for the Lee children, put in impossible situations long before they were even conceived. I read this novel quickly, needing to know what really happened to Lydia and if there was any way this troubled family could pull themselves together.

by Heather Cocks and Jessica Morgan

It takes a lot to get me to read a book out of order on my To Be Read list, but when I spied The Royal We on the shelf at the library I pounced on it. I started it as soon as I got home, would pick it up at any given opportunity to read just a few more pages, and stayed up way too late for a few nights to finish it. I devoured this book and loved every page of it! Rebecca (Bex) Porter isn’t looking for a fairy tale when she leaves America for school in Oxford, England. Yet a prince (specifically Prince Nicholas, the future King of England) is exactly who she finds on her very first day. Despite the warnings and against her better judgement, she can’t help but fall for Nick. He can’t help himself either, but dating a prince is anything but easy. The Royal We follows Nick and Bex as they try to navigate two worlds and two personalities: the real one and the royal one. The book obviously takes inspiration from Prince William and Kate Middleton, but it holds its own as a delightful and entertaining love story with a royal twist.

Did You Ever Have a Family

This is the second book I read this year where the main character loses her entire family in one fell swoop. The first (Wave

) was non-fiction, and gutted me with the raw pain and anguish. Clegg’s book is fiction, and it gutted me with the quiet sadness and desperate feelings of loneliness and guilt in those left behind. The day before June’s daughter, Lolly, is to be married, a horrific accident takes the lives of her daughter, her daughter’s fiancee, her boyfriend and her ex-husband. The accident, as well as who is to blame, is the talk of the town. June flees for the opposite side of the country, and though she feels completely alone, she’s connected in ways that unfold as the days pass. Eleven characters take turns reflecting on the time before and after the accident, including June, her boyfriend’s mother, Lydia, and a town teenager, Silas. They’ve all been touched in some way, but it is this trio, who share the burden of blame, that must connect to set each other free. The writing is beautiful, and I read certain passages over and over again – not out of confusion, but out of wanting to let the words soak in. My favorite is this:

“Rough as life can be, I know in my bones we are supposed to stick around and play our part. Even if that part is coughing to death from cigarettes, or being blown up young in a house with your mother watching. And even if it’s to be that mother. Someone down the line might need to know you got through it. Or maybe someone you won’t see coming at all will need you. Like a kid who asks you to let him help clean motel rooms. Or some ghost who drifts your way, hungry. And good people might even ask you to marry them. And it might be you never know the part you played, what it meant to someone to watch you make your way each day. Maybe someone or something is watching us all make our way. I don’t think we get to know why.”

What were your favorite fiction reads of 2015? 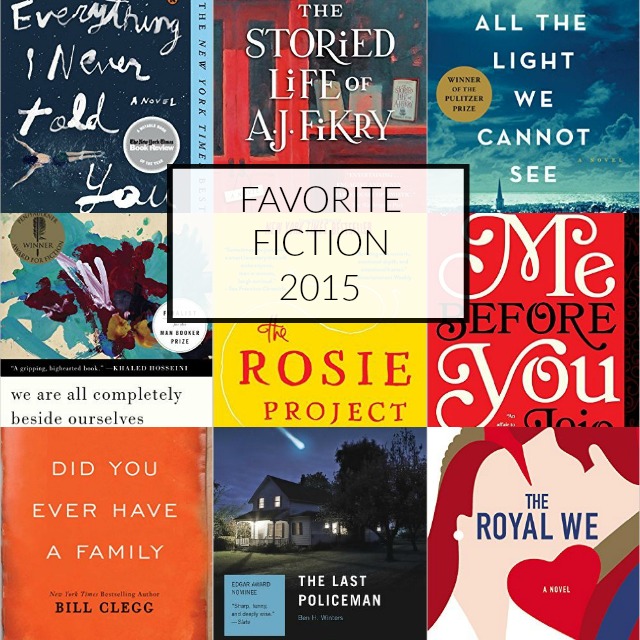