As we wrap up 2015 and I look back at the many books I read, I thought I would share my favorites by category instead of one big list. Today I’m sharing with you my favorite reads (along with a few of Elena and Eli’s picks) in Kids and Young Adult books this year. (Note: these are books we read in 2015, but not necessarily published in 2015.) Enjoy!

The One and Only Ivan

Winner of the 2013 Newbery Medal, The One and Only Ivan tells the story of Ivan, a mighty silverback gorilla who has spent nearly his entire life behind the glass in a shopping mall zoo. Captured as an infant, he spent his early years living with a family until he got to be too much to handle. Based on a true story, Applegate weaves a tale of hope and heartbreak. Ivan may not have any other primates to keep him company, but he bonds with Stella, an aging elephant, and Bob, a stray dog. He is content with all he’s really ever known, until Ruby arrives. A baby elephant taken from the wild, Ruby forces Ivan to look at his surroundings in a new light. Are they destined to spend the rest of their days in the run-down mall? Or can Ivan protect them from a bleak future and save them all? Applegate’s writing is like poetry, and you’ll be hard-pressed to read it without shedding a tear. If your kids enjoy this book, be sure to check out Applegate’s picture book, Ivan: The Remarkable True Story of the Shopping Mall Gorilla

I knew nothing about these books until a few weeks ago. Eli and I were shopping for his Hope 4 the Holidays buddy, who requested books. As they’re the same age and about the same reading level, we hopped on Amazon to buy a few books Eli likes. While we were browsing the best books of 2015, Eli saw this series. “Those are so good! I read them at school all the time.” When the books arrived, I spent a few minutes flipping through the first book in the series. I can see why they appeal to the middle grade reader. Think Magic Tree House meets action and adventure. The stories take readers on an adventurous ride through places like the rainforest, the savanna and the Great Barrier Reef. In addition to the story, each book is creature facts, maps, and interesting tidbits about the locale.

Eli’s a big fan of graphic novels, and these Nathan Hale novels combine his love of the genre with topics that appeal to his love of adventure and danger. I love that the books tell the stories about historical events in a way that captures young readers’ attention. I really hope Hale expands on the series, but for now you can find books on World War I, the Underground Railroad, the Donner Party, the Civil War and the Revolutionary War.

This delightful book was one I read aloud to Eli. Read-aloud books for the young elementary set require a few things to make them work: an interesting story that builds in excitement or suspense, smart and natural dialogue, and a few well-placed illustrations. Masterpiece has all of those things, and we both loved the story of Marvin, the beetle living under the sink in James’ New York City Apartment. James’ parents are divorced and he feels as if neither parent really gets him. Marvin has spent much time observing James, and has a fondness for the boy. When James’ artist dad gives him a pen and ink set for his birthday, Marvin can’t resist dabbling in it while James sleeps. The result will take James and Marvin deep into the world of art and stolen masterpieces. So fun, and we’re looking forward to reading more in Broach’s sequel, James to the Rescue

Back to the graphic novels! I saw this book mentioned in several different places as a good read, so I snatched it up when I spied it on our library’s new books shelf. I didn’t say anything about it to Eli, just set it on his nightstand. I worried a bit that he might dismiss the book just on the cover or the girl-centric topic. Instead, he’s been reading and re-reading it every evening since it came home. Further proof that a good story appeals to all genders and that you don’t need to base a book on zombies or bathroom humor to entice boys to read.

This was my pick for “A Book I Chose Because of the Cover” in the Modern Mrs. Darcy 2015 Reading Challenge. I may have cheated a bit, as that’s the reason I chose the the first book in the Miss Peregrine’s Peculiar Children series. Have a look, though – isn’t this cover just as cool and creepy? It had been a year since I’d read the first book, so it took me a few chapters to get the characters straight again. Once I did I was taken right back to where the Peculiar Children left off, and I was just as anxious about their quest to flee from the deadly hollowgast monsters and save their beloved Miss Peregine. The book is filled with even more fantastically creepy vintage photos the author found in flea markets and collections. The good news? The second book is just as wonderful as the first. The bad news? You’ll want to dive into the third novel right away if you can get your hands on it.

Like the main characters, Olly and Maddy, this book caught my attention just from the cover. The description had me hopeful, the first few pages had me smitten, and after the first illustration I was in love. Maddy suffers from a severely compromised immune system – so much so that she lives her life inside the bubble of her home. She never leaves, and it takes such a protocol for visitors to come in safely that they are few and far between. When she glimpses Olly moving in next door and he takes an interest in her, everything changes. The bubble is no longer protective – it’s suffocating. Nicola Yoon’s debut is fantastic, and she gives readers a heartfelt story about love, loneliness, and the lengths people will go to protect their hearts. There were a few details and story lines that were somewhat unbelievable, but the overall depth of the characters and the plot more than made up for those shortcomings. Elena read it as well and named it one of the best books she’s read this year. It was nominated for Goodreads “Best Books of 2015” for good reason.

All the Bright Places

Elena and I listened to this book together over the course of a few weeks and multiple trips back and forth to art lessons and summer camp. We both loved it, and the ending gutted both of us. Violet Markey is counting down the days until graduation. It’s everything she can do to get through the school year after a tragic accident claims her sister’s life while sparing her own. Theodore Finch is counting up, measuring each day he’s “awake” following a severe bout with depression as a major accomplishment. Their paths in school never cross, Violet being the pretty and popular one, Finch being the freak, until they meet in a precarious spot. Partnered together for a school project, they discover Indiana, and along the way discover in each other the only person they can be their real selves with. After reading Hoosier native Niven’s book, Elena and I are ready to wander the same quirky parts of Indiana as Violet and Finch.

Elena read this for a school project with a really cool assignment: create a playlist for your chosen book based on the different emotions the book evokes for you throughout its pages. According to Elena, Mosquitoland had lots of emotions. The main character, 16-year-old Mim “is not okay.” Her family has fallen apart, and after her parents divorce and her father remarries, she moves thousands of miles away from her mom and her childhood home. When her mother falls ill, Mim steals money, buys a bus ticket, and runs away from home to be with her. Along the way, Mim finds she can run away, but the demons of the past will always catch up with you until you face them head on.

What were your favorite books written for Children and Young Adults this year? Find inspiration for great kids and YA books throughout the year by following my Good Reads For Kids Pinterest Board. 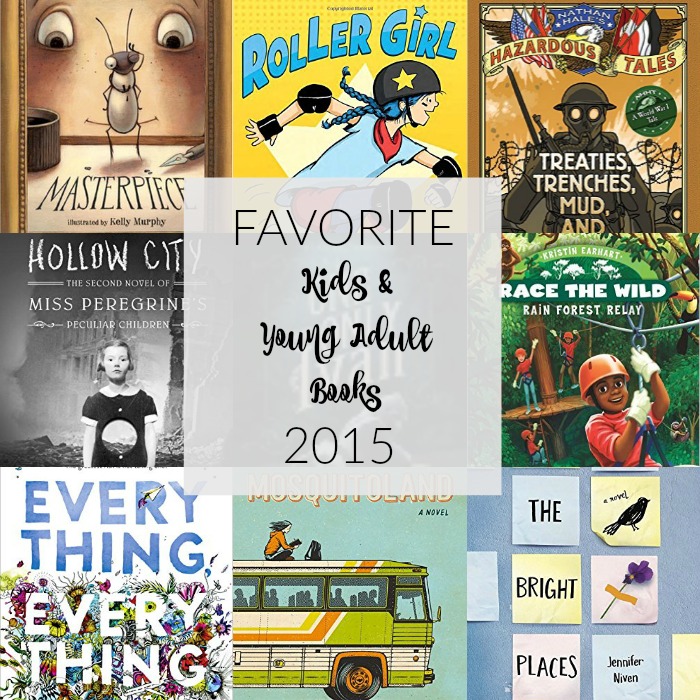