The psychotherapist sits next to me as I lie on the couch. He asks, “What are you feeling right now?”

So maybe the psychotherapist is a figment of my imagination. And maybe the couch is my couch, with last night’s Monday Night Football showdown between the Indianapolis Colts and the Carolina Panthers. But the question is real. And my answer? Well, that all depends on when in the unfurling of this most confusing of games I’m asked.

I spent equal parts of the game flopping around on said couch in utter frustration or nervously pacing the room. I promise, not every single game this season will be viewed from my living room. 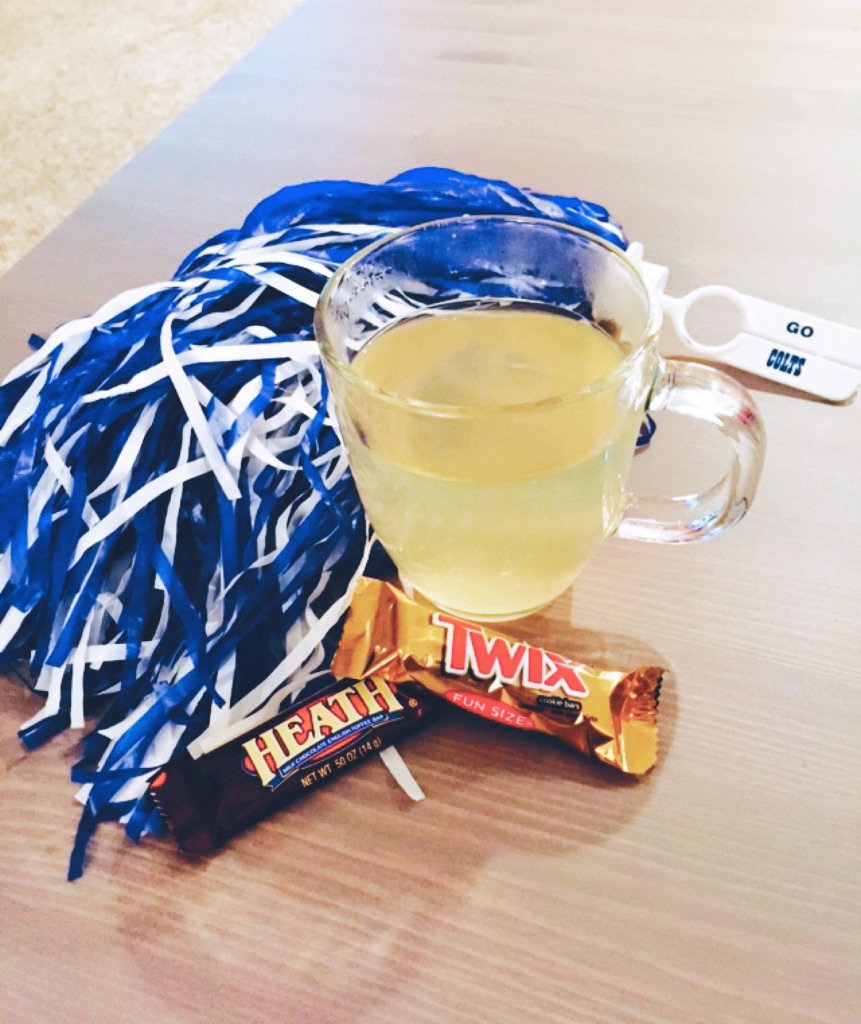 Once again, my Colts are driving me to drink. On this Monday after Halloween, I found a warm and soothing hot toddy paired well with buttery Heath and Twix bars. It did not pair well with the pictured Colts pompoms, which I found little to no use for in 98% of this game.

I’m going to admit something here, and all you optimistic, true blue, never-say-die Colts fans can throw tomatoes at me if you like, but going into this game I was pretty certain we’d get pounced by the undefeated Panthers. We’ve looked terrible, so don’t give me any of that, “And you call yourself a fan!” Add to that playing in front of an amped up home crowd, the driving rain, and reports this week that Andrew Luck may be playing with cracked ribs? Pollyanna has left the training facility.

The first half the game didn’t give me much reason to think otherwise. I mean, when it’s 23-6 in the 3rd quarter and you’ve seen so many flubs that John Gruden comments that the Colts offense is almost comical, you might be tempted to hang it up on a Monday night. But if I’ve learned anything in my years as a Colts fan, I know you have to stay with them until the very end. I have no idea what happened, and I don’t know how we get it back, but we overcame a 17-point deficit to get us into overtime. For 15 glorious minutes we played the Colts football of old. These Andrew Luck memes are never not funny, but this one summed it all up:

Dearest Abigail, Reports of my death have been greatly exaggerated. #Colts #NFL pic.twitter.com/cyqOlN48HF

And then the Interception Monster came back, and at nearly 1 in the morning, it was over. Dejection. Exhaustion. That’s what I’m feeling right now.

We have six days to get back to hope and anticipation before we face another undefeated team at home, the Denver Broncos. I’ll be there in person, so I’ll have to leave my imaginary therapist at home. Let’s hope this time around I don’t need him.