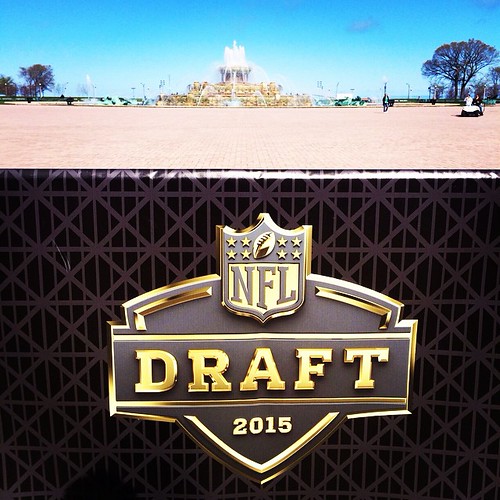 “This is a mistake. What am I even doing here?”

This was the thought running through my mind again and again as I sat huddled over a picnic table in Chicago’s Grant Park last Thursday. I was cold, bored and tired. At what point had I thought this was a good idea?

This brilliant idea would be trying my best to get into the NFL Draft as a spectator. Attending the Draft has been on my sports bucket list for years. Usually held in New York City, the NFL announced a few months ago that the 2015 NFL Draft would take place in Chicago due to a scheduling snafu at Radio City Music Hall. Oh, I was so there.

You can’t buy a ticket to the Draft – it’s free to attend, you just have to snag a somewhat elusive ticket through the NFL’s ticket lottery. Mike and I both put our names on the list and hoped for good news, with no luck. Shortly after, I learned of another chance to get in through 1iota, a ticketing agency that helps gets fans free tickets into music, entertainment, and (sometimes) sporting events. I’ve had luck with 1iota before getting into the NFL Combine, so Mike and I gave it another shot. Bingo. After a brief few moments of euphoria, we returned back to reality. These weren’t guaranteed tickets into the Draft, they were tickets for a “viewing opportunity.” After reading the fine print, we realized that we’d essentially be seat fillers. As the draft started and friends and family of drafted players left the auditorium, those of us with passes would have the opportunity to take their empty seats.

Mike wasn’t about to take two days off of work for the opportunity to stand in line, and I didn’t blame him. I tried a few other people to see if I could find anyone else crazy enough to make the 3 1/2 hour drive and shell out money for a hotel room with me, without any takers. I waffled for the week leading up to the draft. Would I regret it if I didn’t go? Would it end up being a big waste of time and money? Two days before, I decided a missed opportunity would cost me more in regret than in actual dollars. I booked a hotel room and wished for the best. I drove up Thursday morning excited and hopeful, caffeinated and giddy to be by myself. 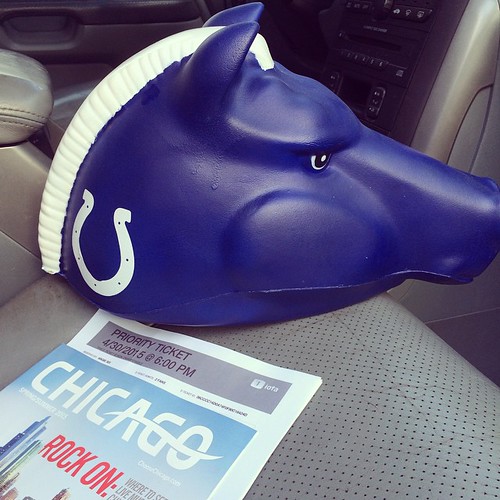 It was fun while it lasted. When it was time to line up with 1iota, my excitement turned to disappointment. There were around 150 other fans there hoping for the same thing – a seat inside the Roosevelt Auditorium. We had to line up at 5:30 and the Draft didn’t begin until 7. For an hour we sat speculating, without any word from 1iota employees. It didn’t look promising. Finally someone from 1iota explained the process. They had no idea if some, all or none of us would get in, and we probably wouldn’t know until the last minute.

Over the next 20 minutes or so, I sat there feeling foolish. The mom guilt set in. For those of you that aren’t parents, let me explain. For a parent to go anywhere, especially out of town and overnight, there are roughly 80 things that must be handled, arranged, and delegated. If it’s the mom leaving, add another 50 things. Throw a puppy in there for fun, just to add a few more kinks in the plan. There is no spontaneity for parents, no going somewhere on a whim just because it sounds cool. I had managed to pull it off and get away, inconveniencing the minimum number of people and disrupting as little of the schedule as possible, all to sit in a windy, 45 degree park to maybe see some guys join a football team. This is not what 40-year-old mothers do, I reminded myself in a not-so-kind voice.

A few minutes before the Draft was scheduled to begin, the 1iota rep stood up with a bullhorn. By some sort of miracle, we were all getting in. There were empty seats both in the Auditorium, as well as across the seat in Selection Square. Those with wristbands numbered 1 through 67 would get in the Auditorium with the players and the Commissioner, Roger Goodell. (To answer your question, no. I didn’t mention The Letter.) The rest would sit in Selection Square. I looked down at my wristband: number 59.

The next few hours were surreal. We were herded into the Auditorium quickly, given a quick pat-down and a golden ticket. I could hear the Auditorium going crazy, with the Draft’s start imminent. I handed the usher my ticket and followed her in disbelief, past Rich Eisen and the NFL Network crew, down, down, down, to my seat, 7 rows from the stage. 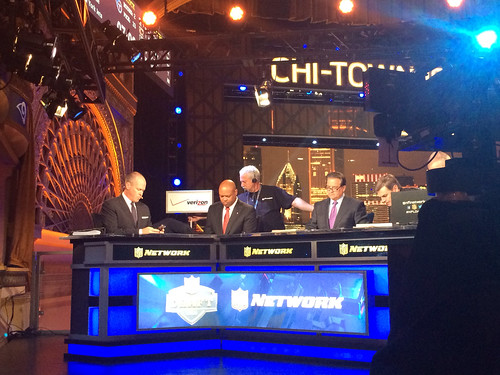 Whatever expectations I had for the Draft, sitting in that seat exceeded every one of them. It was raucous, joyful, and ridiculous. I booed with everyone else when Goodell took the stage (observation: I think he actually likes it). It sounds cheesy, but it is a privilege to be in the presence of so many young men whose boyhood dreams have just come true. Not all of them will do well, but they can be proud that they’ve made it to a level most of their peers have only dreamed of. As a mom, it’s hard not to get emotional for their mothers. Remember that mom guilt, and the giving up of your own spontaneity when you become a parent? I reflected on how much those mothers had sacrificed: all the practices, games, setbacks, injuries and doubt to which they were a front-row spectator. I was so happy for them, and for their sons, and loved soaking up that energy. 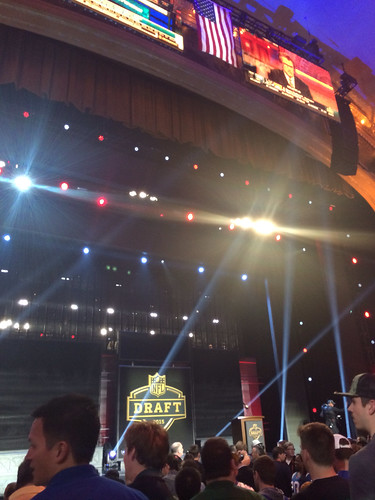 By the time I sat in my seat, my phone battery was nearly dead. At first I was frustrated and mad at myself – how could I not think to pack a charger? In the end, I’m glad. Instead of taking a million pictures and live-tweeting every moment, I just took it all in. Who knows if I’ll ever have the opportunity again? 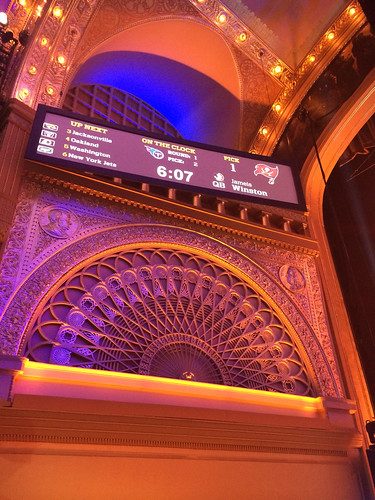 Walking back to my hotel that night, I relived some of my favorite moments in my head. Waving to Steve Mariucci from my seat. Jumping up and down in hopes that my family would see me in the background of Deion Sanders’ player interviews. Giving the Walter Peyton Man of the Year, Thomas Davis, a standing ovation. Cheering for Danny Shelton, picked 12th, giving Goodell a bear hug that swept him off his feet. Watching with amusement as DeVante Parker’s friends, sitting across the aisle from me, screamed for him as his name was called. Seeing my Indianapolis Colts turn their pick in. 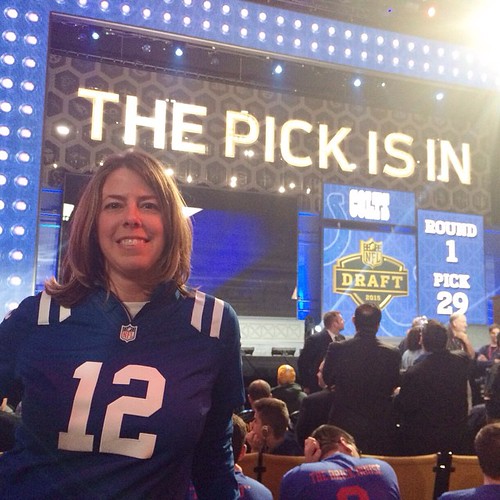 Going to Chicago might have been spontaneous, risky, and just a little bit crazy, but my post-Draft analysis tells me it was a solid selection.