In June of 2014 my family spent a month traveling through Spain and London. I’m highlighting our individual destinations, giving you tips on traveling with kids and sharing some of the best things we discovered. You can find previously published travel posts on my Travel Page. You can find all the photos from our trip on my flickr page.

Somehow,somewhere, I got off track with posts recounting our trip to Spain. I’m realizing that if I don’t finish writing those posts soon, we’ll hit the one-year mark of our trip! Part of what was holding me back was editing the nearly 900 photos I took while traveling. I’m happy to say that I finally buckled down and finished editing AND printing every single one. So now that I have that under wraps, how about we move on with a visit to Barcelona?

We flew to Barcelona following our side trip to London. I’m happy to report that our second experience on RyanAir went much better than our first. Our bags were still over the weight limit, but we were able to shift things around suitcases without fear of missing our flight. As much as we loved London, it was such a lovely feeling to walk out into warmth and sunshine after three days of cold and rain. 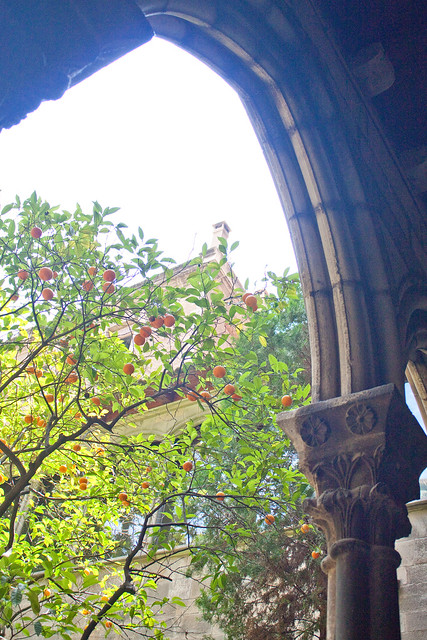 Barcelona is absolutely beautiful, like no other city I’ve ever visited, and so completely different from the rest of Spain. The architecture is just incredible, and I spent much of the trip with my eyes upturned and my mouth open in wonder. 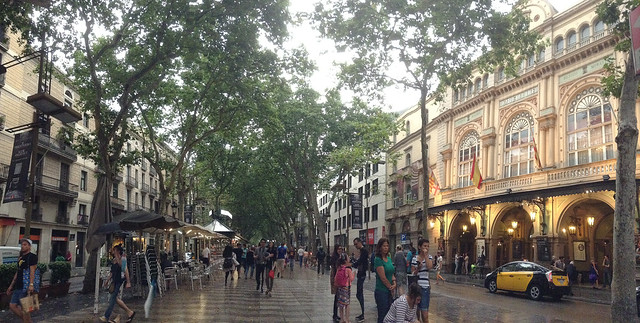 We arrived on a Tuesday afternoon, so after getting situated in our room, we decided to stroll along Las Ramblas. At the Plaça de Catalunya, the kids discovered their second favorite thing in Spain after churros: pigeons. We bought two bags of food and let them go to town. 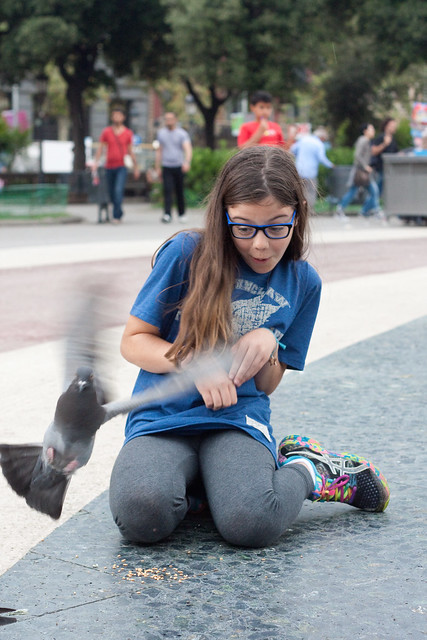 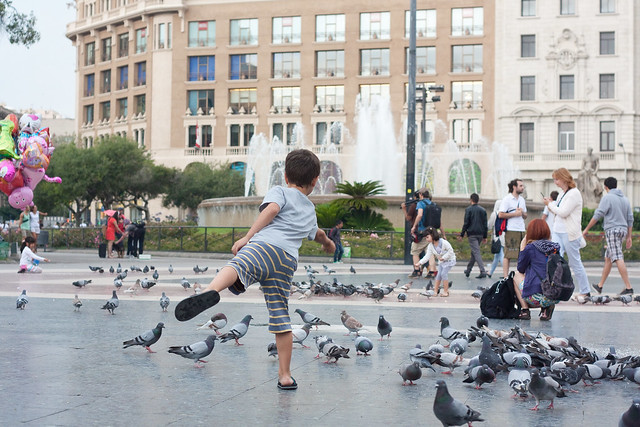 Legend has it that a drink from the Fountain of Canaletes ensures your return to Barcelona. We all wanted that to be true, so we drank up. Eli practically drenched himself (the water comes out really fast), so I see multiple return trips to Barcelona in his future! 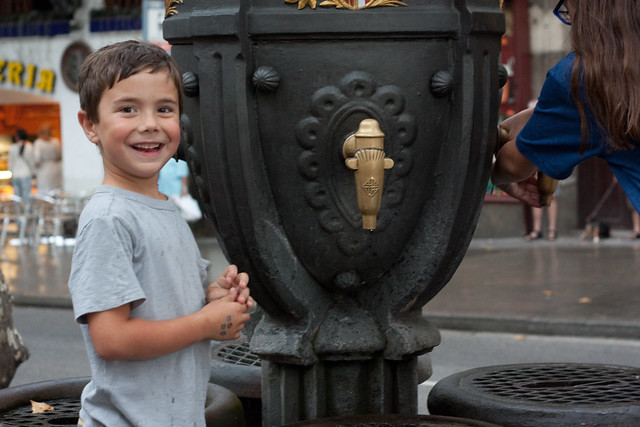 Farther along Las Ramblas I found my own version of heaven: La Boqueria. So much amazing food, so little stomach space available! 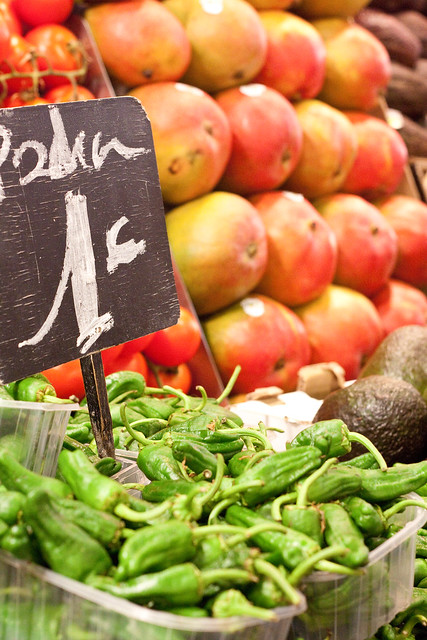 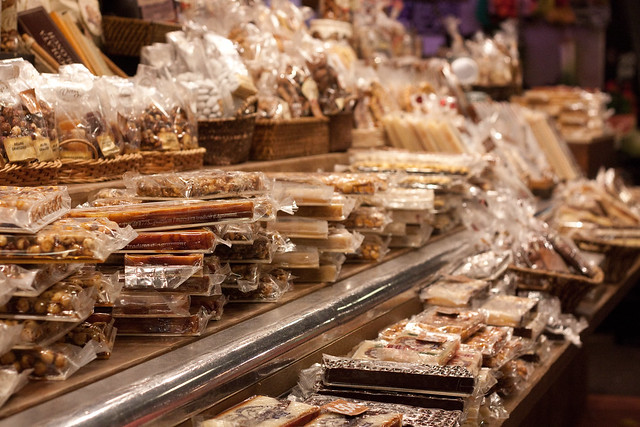 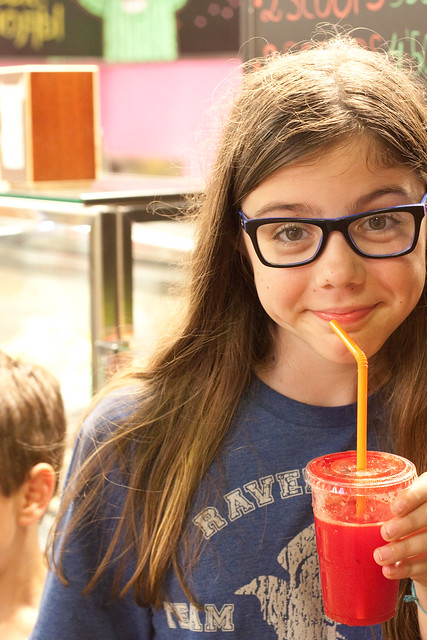 On our way back to the guesthouse, we found ourselves in the middle of an epic thunderstorm. While Mike and I huddled under the eaves, the kids had other plans, which resulted in one of my favorite memories from the trip:

The rain in Spain … falls heavy in Barcelona tonight! #sixesinspain

Wednesday would be our only full day in Barcelona, so we wanted to make the most of it without completely wrecking the kids. We started off early with a visit to Gaudí’s Sagrada Familia. We bought tickets that included an audio guide as well as a visit to the tower on the Nativity facade. The audio guide was very helpful, allowed us to move at our own pace, and kept the kids’ interest as well. The additional entry to the tower was very cool – it allows you to go up one of the towers and cross the bridge in between the towers. 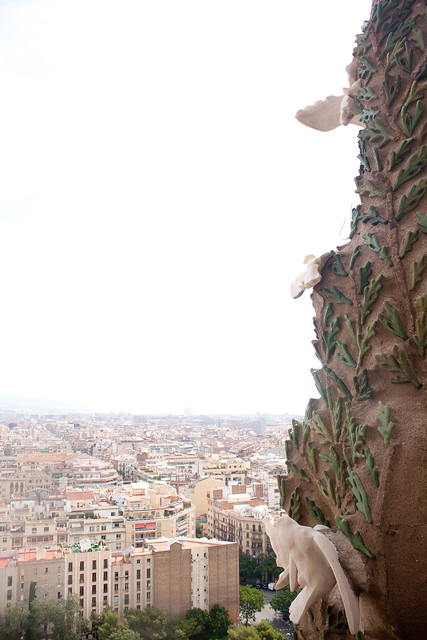 The views are breathtaking … but the space is very tiny and cramped. So if you’re afraid of heights, claustrophobic, or larger rather than small, you might consider skipping this additional tour. 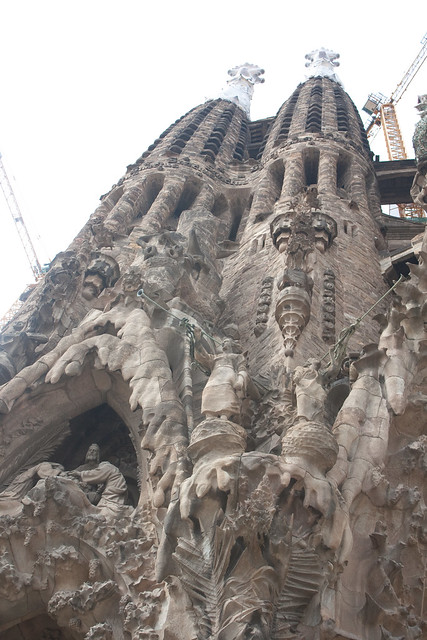 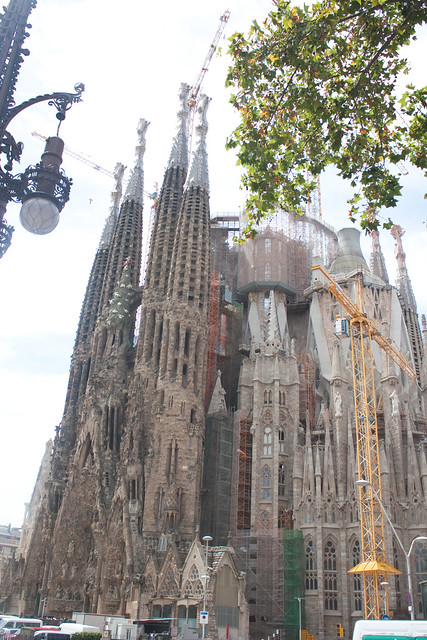 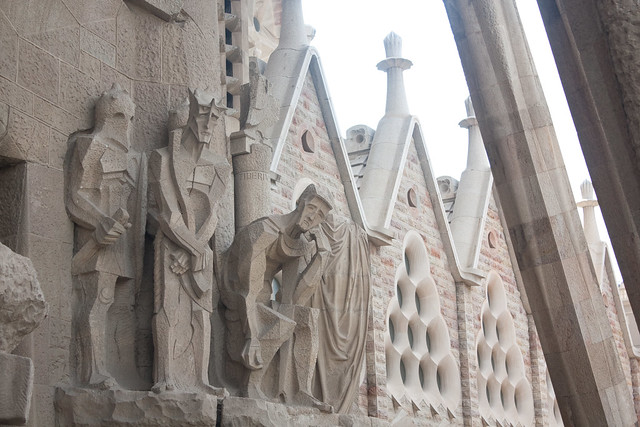 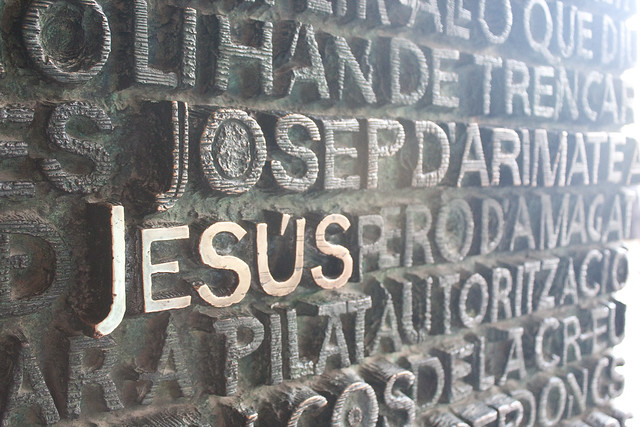 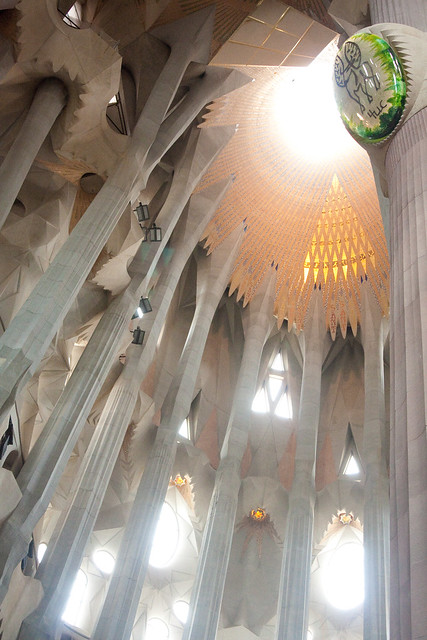 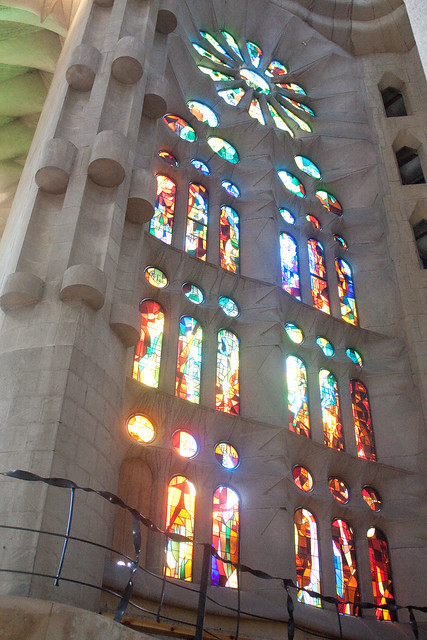 Words cannot do this cathedral-in-progress justice. It’s like nothing you’ve ever seen before. I’m not being overly dramatic when I tell you it moved me to tears. It’s something we’ll never, ever forget.

Speaking of buying tickets ahead of time, if you want to walk through Park Güell, Gaudí’s iconic park, you’ll want to buy tickets in advance to this as well. We headed there after lunch, but found that in order to see monumental area (where the most famous areas of the Park are) we’d have to wait nearly 2 hours for entry. You can visit other areas of the Park without a timed ticket, so we took about an hour and wandered around. 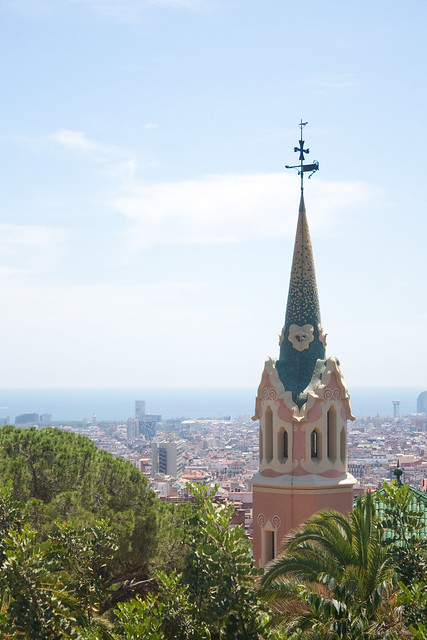 The kids were dying to see the ocean, and Mike and I were happy to indulge if it meant we could lounge around on the beach and give our feet a rest. We spent the rest of the afternoon at Barceloneta. We probably should’ve warned the kids about the nudity, especially Elena. I’m not sure she’ll ever recover from so much full-on male nudity in the presence of her parents! We had a great dinner at Makamaka, with some excellent people watching as well, followed by a relaxing evening on the guesthouse rooftop hammocks. 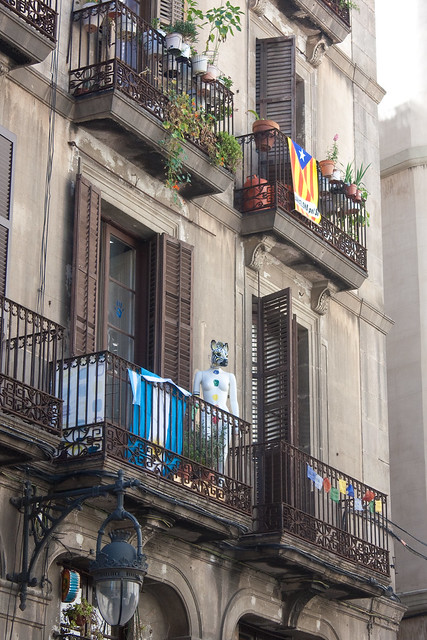 We had an early evening flight to Seville on Thursday, so we took advantage of our last few hours in Barcelona to do a walking tour of the Barri Gòtic (Gothic Quarter) neighborhood at our own leisurely pace. We started off at a museum no kid in their rightful mind will turn down: Museo de Xocolata (Museum of Chocolate). Forget a golden ticket – our ticket was a chocolate bar! It’s a small but fun museum, with information about the history of chocolate, as well as some incredible works of chocolate art. 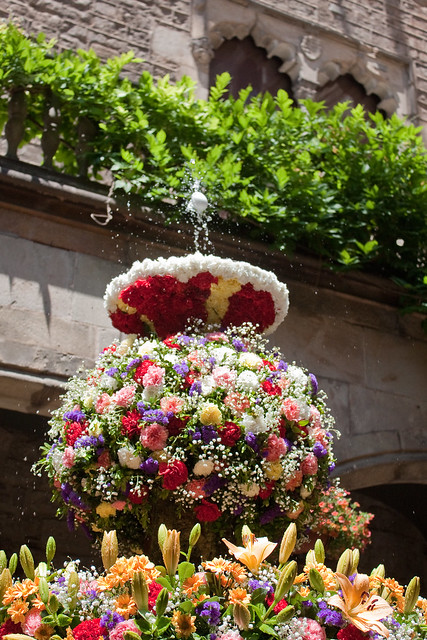 We saw so many unique and beautiful things on our walk, but the coolest thing of all was the various displays of the Dancing Egg. We just happened to time our visit with the Feast of Corpus Christi. Many cloisters and courtyards in Barcelona feature beautiful fountains. During Corpus Christi, the fountains are decorated with flowers, and an egg is place in the water jet. The egg rises and falls with the water, and appears to be dancing. No one is really sure of the significance of the egg, but it has been a tradition since the 1600s! 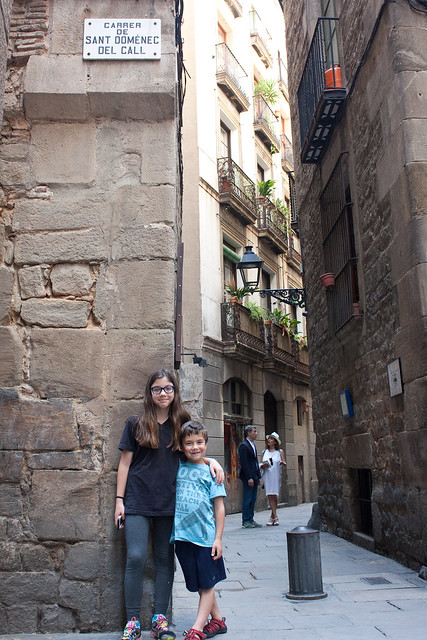 Our time in Barcelona went entirely too quickly. We could’ve easily spent another few days there. As short as our visit was, I’m very glad that we made it a part of our trip. It was our favorite part of Spain, and a fabulous city to visit with kids. So, to wrap up Barcelona:

How much time should you allocate?

As I said, we needed more time. While we didn’t feel rushed, we left out a lot of things we would’ve liked to see. In order to see the city without killing your kids, I’d plan 3 full days.

Do not go to Barcelona and not see Sagrada Familia. I don’t care how touristy you think it is, or how cathedral-ed out you think you (or the kids) are. It’s that awesome.

I highly, highly recommend buying your tickets ahead of time for Sagrada Familia. With our timed tickets, we were able to walk right in, while the line to buy tickets (even early in the morning) snaked around the cathedral.

The Metro system is organized, clean, and fairly easy to use. We used it several times in the little time we were there, including as transport from the airport to the city. Buy a T10 card. It can be used by multiple people and provides 10 single trips per card.

If you’re trying to stick to a budget, check out 20 Free Things to Do in Barcelona – lots of great ideas here!

We discovered our love for a new kind of pastry, a specialty of this area of Spain: ensaimadas. Imagine a snail-shaped, brioche-like pastry dusted in powdered sugar … delicious. 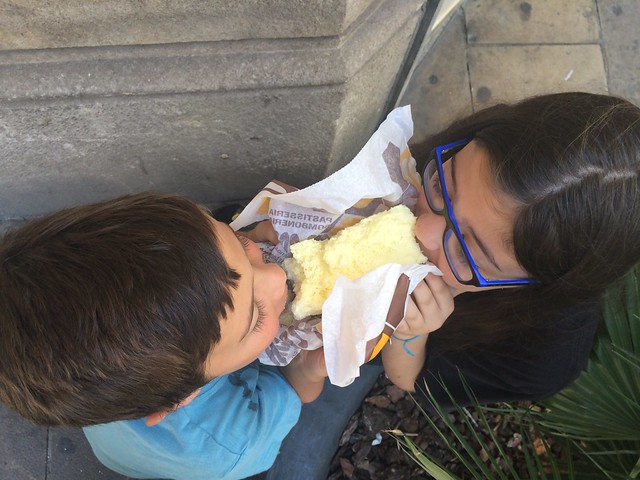 We were also stopped in our tracks by a display of pastel and neon blocks of … well, we weren’t sure exactly. We bought a couple, which had the texture of a very sugary meringue. We later found out they were bolados, which are meant to be dissolved in water for a refreshing drink. Welp, we ate them. And they were tasty. We found them at La Colmena, Spain’s oldest handmade candy shop. You could eat a hundred things here and not be sad. 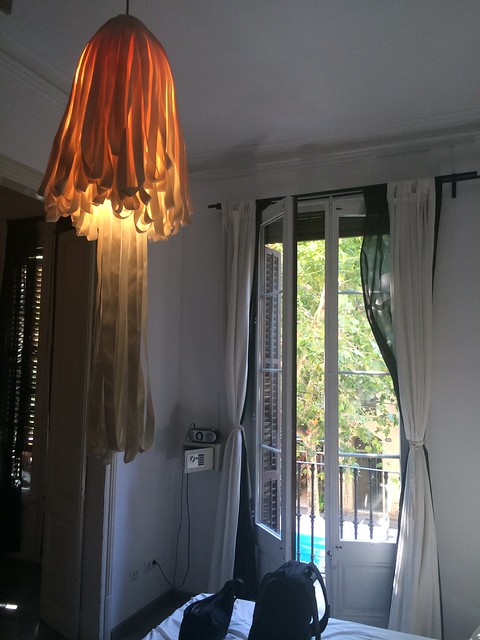 We stayed in the absolute cutest guesthouse, ZooRooms, in the Eixample neighborhood. After our closet-sized room in London, the luxury of spreading out through two large rooms was almost more than we could handle. In addition to our large quarters, we had use of a kitchen, as well as a large rooftop patio. The owner was ridiculously kind and helpful. After giving us a full tour, he sat down with us and went over a map of Barcelona. He asked us what we hoped to see, and then gave us recommendations on how best to get there. He showed us where the nearest market was so we could buy a few things for breakfast, and he recommended several restaurants nearby that we might like. I’d read in the property description that there was a washing machine available. When I asked about it, he waved his hand. “Leave it outside your door and we’ll wash it for you,” he said. We hadn’t done laundry in 5 days, so this was no small feat! The price was very reasonable for both the accommodations as well as the prime location. I’d stay here again in a heartbeat. 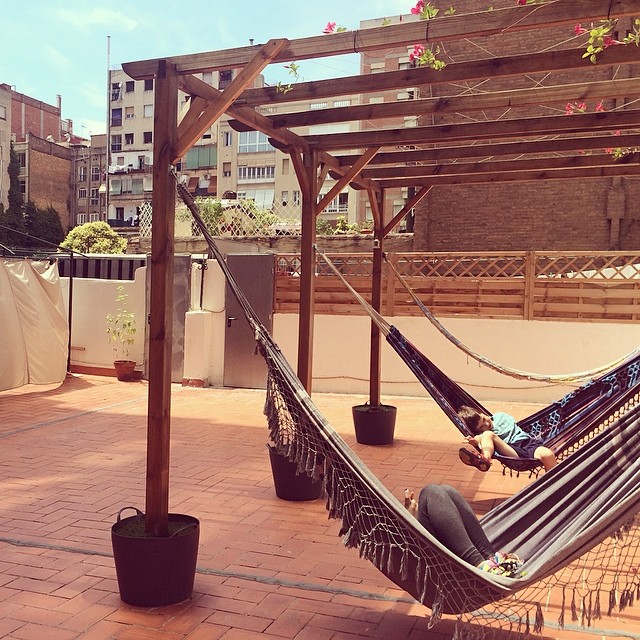 Next up: We take a different turn on our trip, heading south to Seville … and renting a car for a for a little road trip through Andalusia!