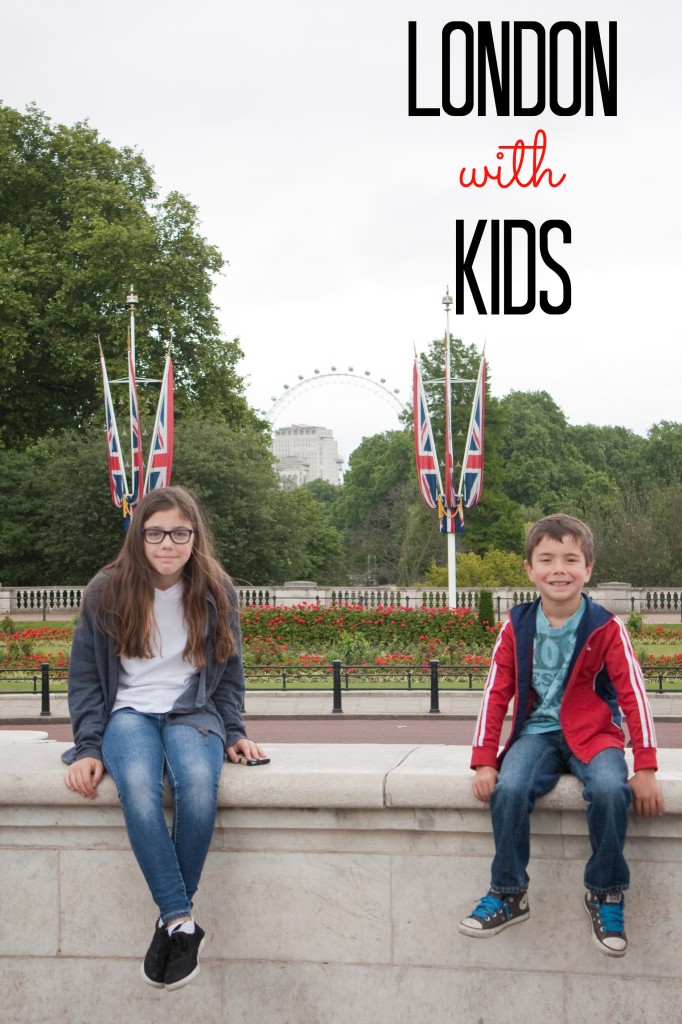 As we were planning our trip to Spain, we waffled back and forth over whether we wanted to try and visit anywhere outside of Spain. On the one hand, we didn’t want to overdo it and pack so much in that we couldn’t enjoy our destinations as we visited them. On the other hand, when would we have a chance to visit Europe again? In the end, a free hotel and cheap airfare won us over, and we booked a 3-day side trip to London.

We flew Ryanair out of Madrid (you can read more about that panic attack-inducing experience here). I’ll just say that while air travel in between European countries can seem ridiculously cheap to us Americans, you must factor in the restrictions. Before you commit to a ticket, figure out if you can make it work with the stringent luggage requirements (size AND weight). Also double check where your flying into. For example, flying Ryanair into London doesn’t mean flying into Heathrow. We flew into Stanstad, which is 30 miles outside of central London, necessitating bus transportation. I’m so glad we did it, and it was worth the hassle, but just do your homework before you finalize your itinerary.

We arrived in London on a Saturday morning. We were able to drop our bags off in our hotel, allowing us to get a full day of sightseeing in on the first day. Even after spending only a few days in Spain, it was so nice to be back amongst the English-speaking again! We grabbed a late breakfast and plotted out our day.

The first order of business was a bus tour. We couldn’t do London without riding on a double-decker bus! They aren’t cheap, but the hop-on, hop-off bus tours can be worth it if you’re totally new to the city. We rode the complete loop once, just to get our bearings and to ooh and aahh at all the landmarks we’ve seen on screen but never in person. We had excellent tour guides the entire time, and really learned a lot about the city. We purchased 48-hour tickets and used the bus as our main mode of transportation. We still had to supplement with a couple of cab rides and one ride on the Tube (how could we not?!), but overall it worked really well for us. 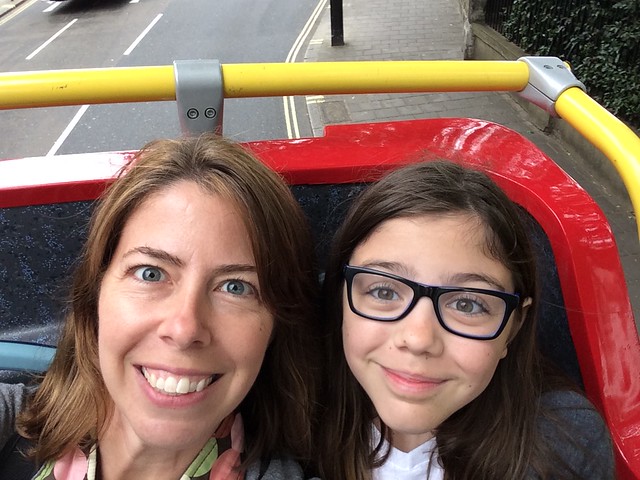 After the first loop, we took of on a walking tour of our own design. We didn’t really have an agenda, other than to walk around with our eyes as big as saucers and marvel at the fact that we were actually in London! I was in love instantly. I could walk around the city for days. We visited Mrs. Kibble’s Olde Sweet Shoppe and filled a bag with candy to nibble on while we walked. 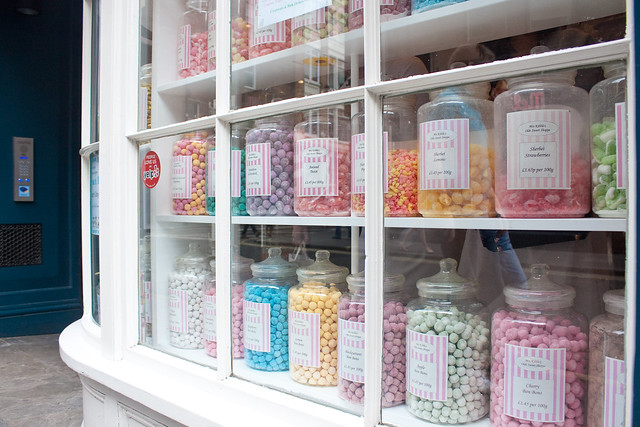 We spent at least an hour in Hamleys, which is easy to do when you have 7 floors of toys! 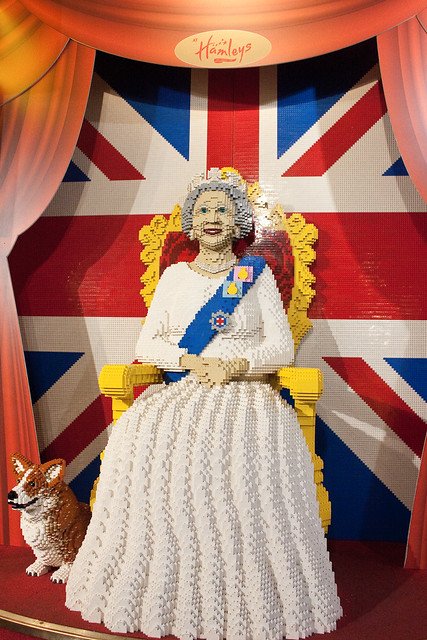 Elena is a huge fan of the PBS show “Sherlock,” and as soon as she found out we were going to London she wanted to know if we could visit 221b Baker Street. You have to reward a kid who binge watches PBS, so we indulged her with a visit to the Sherlock Holmes Museum. 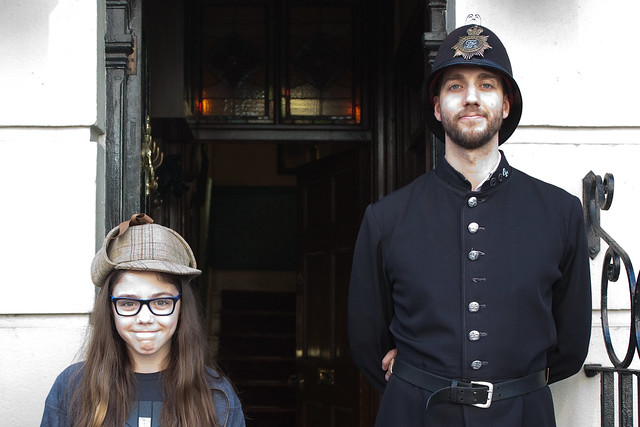 Knowing Eli would be bored out of his mind, we split up, and Eli and I walked over to Regents Park. 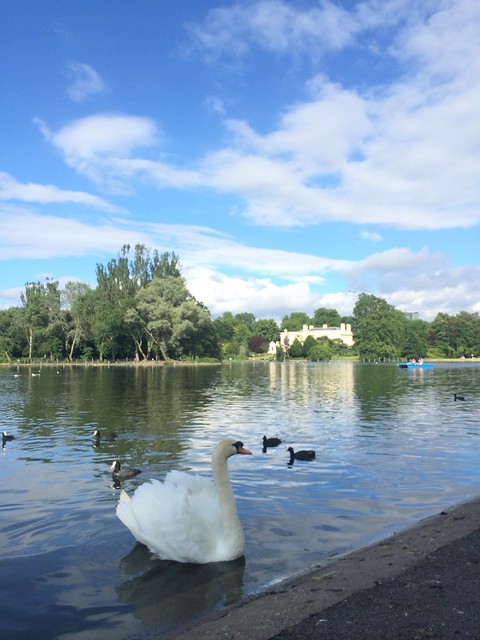 His favorite part? Chasing pigeons (for some reason, pigeons were a big highlight of nearly every city we visited). My favorite part? Having my first 99 Flake. We also stumbled on yet another really cool playground. 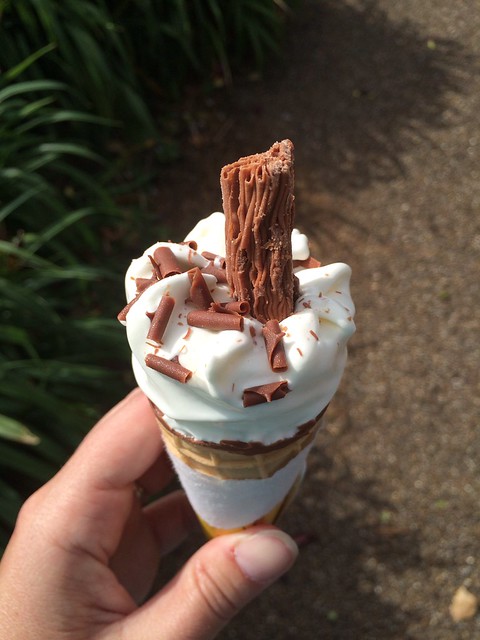 We capped off the first day with a trip on the London Eye. 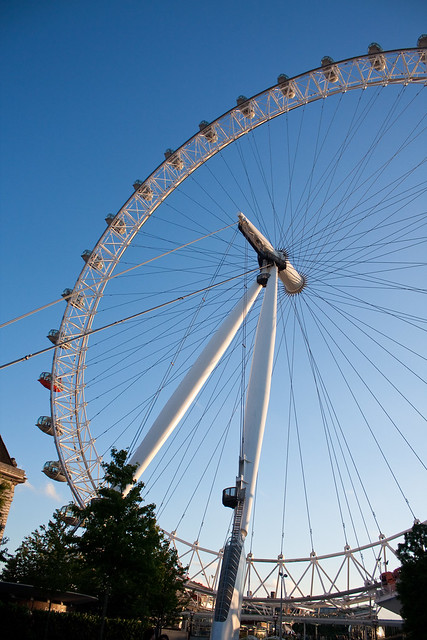 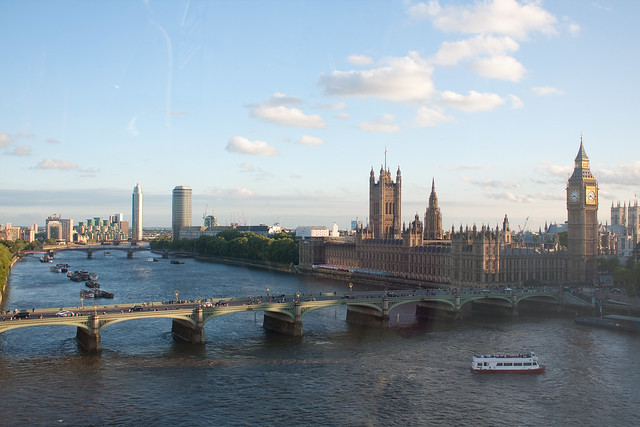 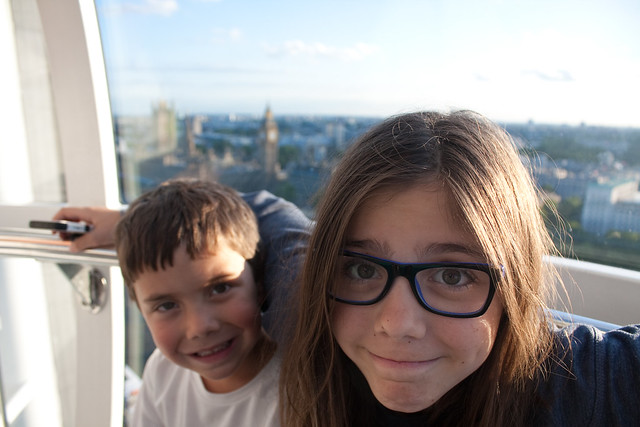 It’s another pricey and very touristy attraction, but the kids were dying to go on it. I have to say, it was pretty cool. The views were amazing, and it was one of the favorite memories of the trip for the kids. There’s a fabulous playground in the Jubilee Gardens near the London Eye, too. 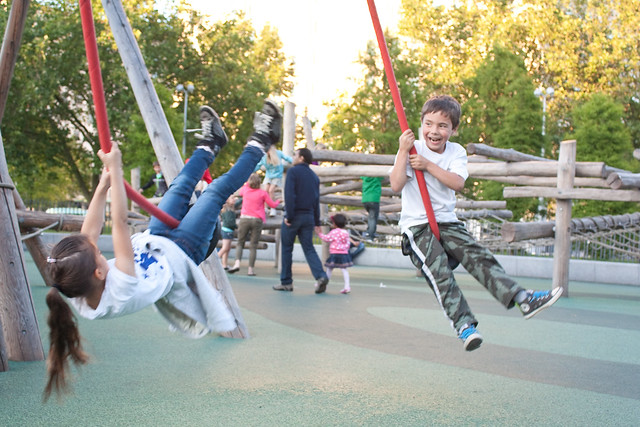 We woke up on Sunday with intentions to get an early tour of the Tower of London, but our bus driver mentioned that we had great timing if we wanted to catch the Changing of the Guard. It was a spur of the moment decision to hop off the bus, but I’m so glad we did. It just seems like one of those things that everyone should experience once. With that being said, it’s probably not worth it with young children. You can’t just stroll up 5 minutes before and expect to see anything, as crowds begin to gather in front of Buckingham Palace well over an hour before the ceremony begins. We got there a little over an hour before. We walked around Buckingham Palace, took a few photos, and then strolled around the Mall. 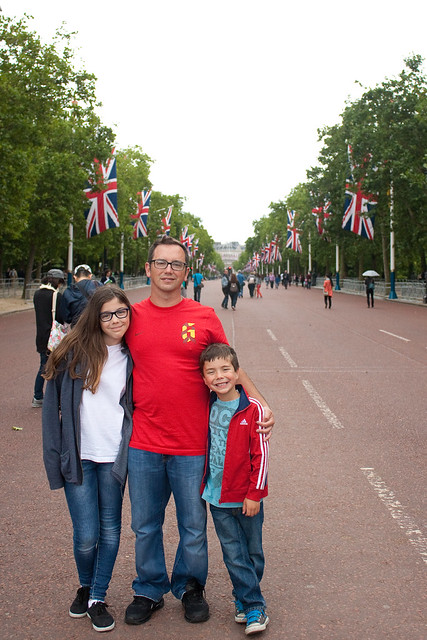 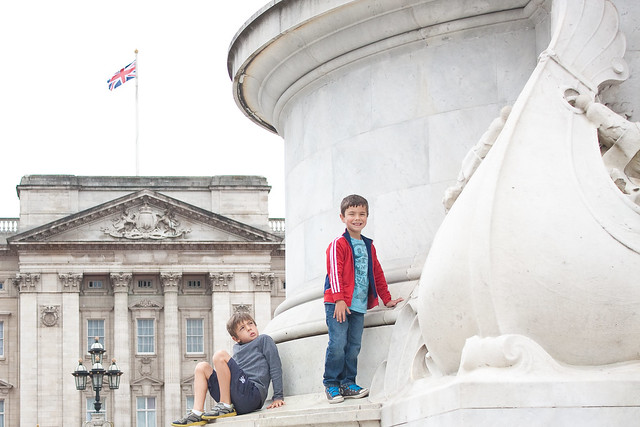 We then found a great spot to watch on the side of the Victoria Memorial opposite the Palace, facing the Mall. From this point we were able to watch the outgoing guards from St. James Palace and the Royal Mews parade toward Buckingham Palace. Soon after we could see the fresh troops arrive from Wellington Barracks, complete with a marching band! So maybe we didn’t see the complete Changing of the Guard, but everyone was happy. 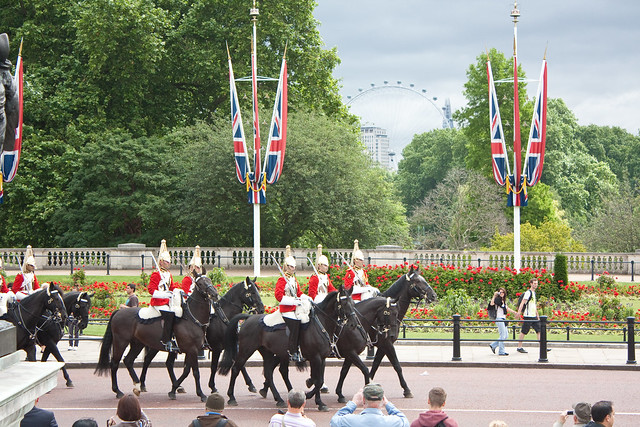 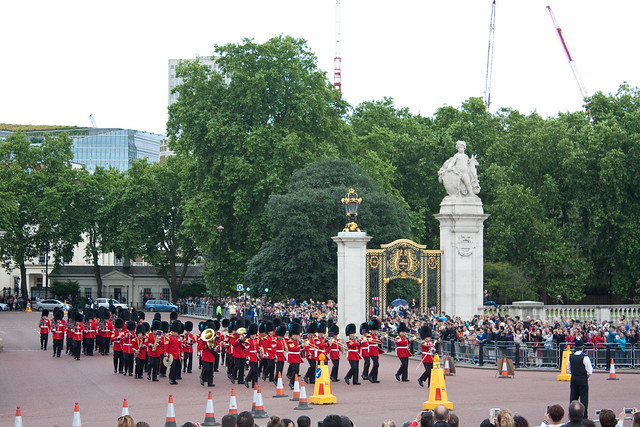 Next up was the Tower of London. You can easily spend 3 hours here, as there’s lots to see and so much history (much of it bloody) within its walls. It was definitely a highlight of the trip and I highly recommend it. 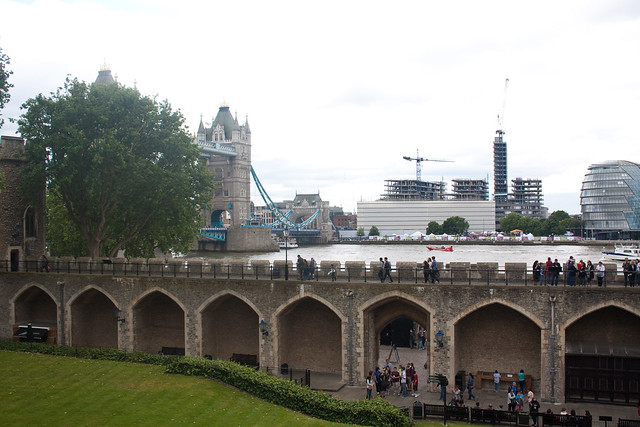 Mike was picked to participate in a demonstration of how a trebuchet works. Thankfully they launch water balloons these days instead of boulders or flaming manure. Eli loved the White Tower, full of weapons, armors and instruments of torture, huzzah! As the Tower is still considered an official royal residence, there are guards here as well. Thank goodness, as it provided the backdrop for one of my favorite photos of the trip! 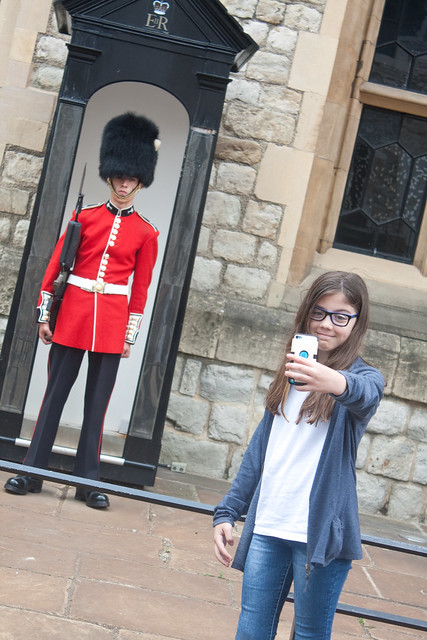 I, of course, enjoyed seeing the Crown Jewels (no photos allowed). The kids? Not so much. 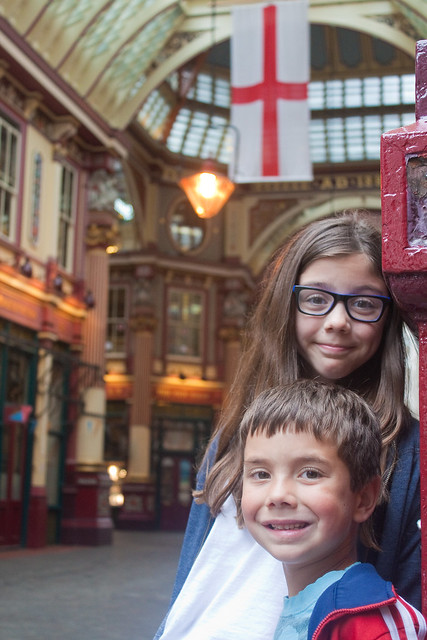 On our way back to the hotel, we swung by Leadenhall Market, a filming site for Harry Potter. It was pretty deserted on a late Sunday afternoon, but the kids got a kick out of seeing it. Recognize the entrance to The Leaky Cauldron? 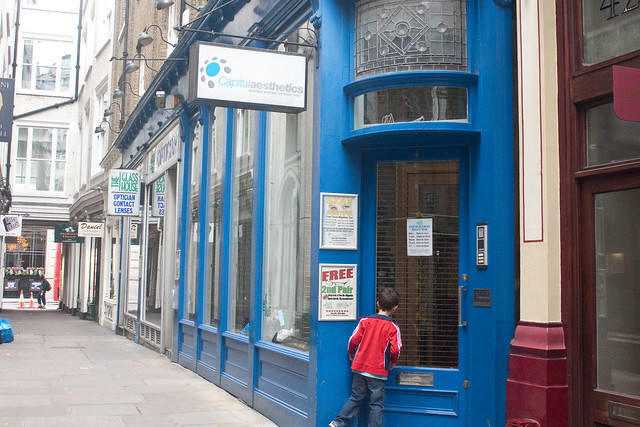 We ate dinner near our hotel at St. George’s Tavern. It was our only experience with a neighborhood pub, and we loved it. Eli could eat his weight in fish and chips, and I could drink my weight in English lagers. 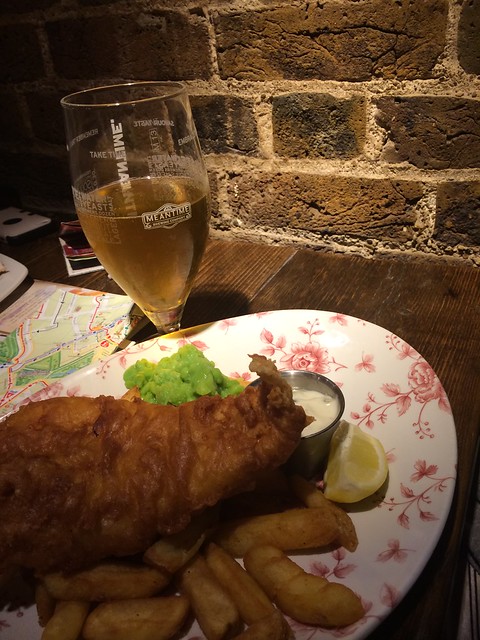 Monday was our last day in London. It was a full one, so we got an early start. We took a cab to Hyde Park just to stroll around. It felt like we had the park all to ourselves, except for some walkers and horse riders(!), and some strange kid on a snail. 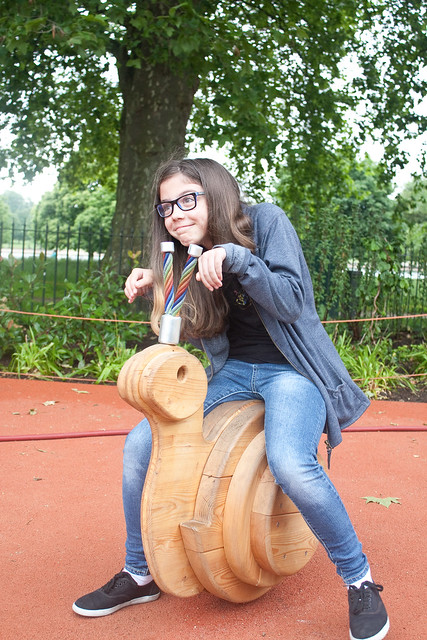 I couldn’t leave London with a visit to Harrod’s. When I die, please bury me in the Food Hall in the Harrod’s basement, right next to the Ladurée macarons. 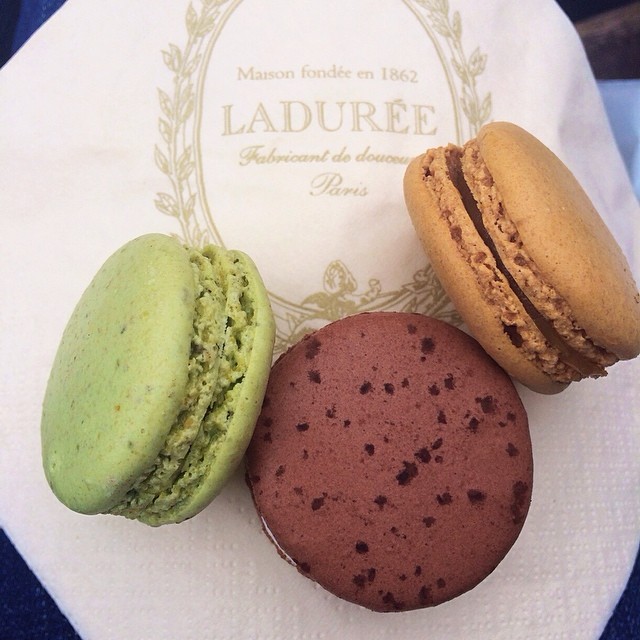 We had one last adventure planned for London, but it deserves a post all of its own: a visit to Warner Bros. Studio to tour “The Making of Harry Potter.” Stay tuned for a full report on that excursion! So to wrap up London:

How much time should you allocate? Oh man, there’s no good answer for this. We had essentially 3 full days, but most of one day was spent outside London touring Harry Potter. If you plan to include a side trip to the Warner Bros. studio, I’d say 4 days in London and 1 to tour the studio. That would give you 4 days to be more leisurely about your sightseeing and fit in a few more sights or strolls, and perhaps a theater performance (we really wanted to see “Matilda,” but just couldn’t cram it in). All I really know is 3 days wasn’t nearly enough – I’m dying to go back! 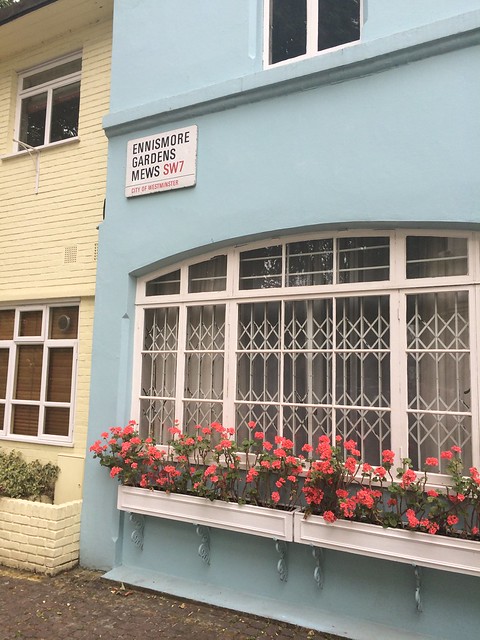 Must-see: The Tower of London. All of us found something to love and remember here. And if you have Harry Potter fans traveling with you, Warner Bros. Studio tour. 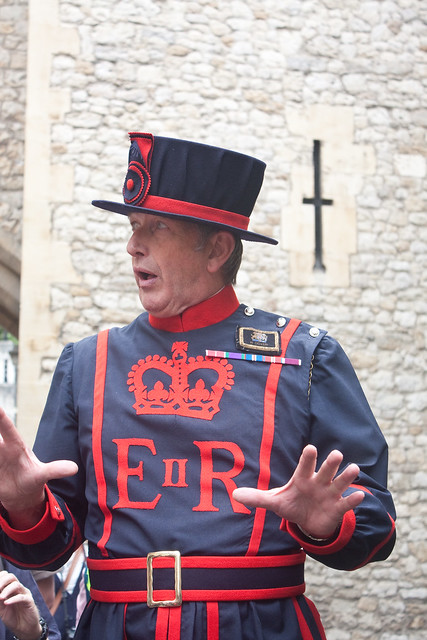 Best tips: Pack for the weather! London is often cool and rainy. Mike didn’t pack a jacket or long-sleeves and he was cold, even in June. When visiting the Tower of London, take advantage of the free, guided Beefeater tour. You’ll get some really great storytelling and jokes the kids will love. If you get there early, see the Crown Jewels first. The line can get really long as the day goes on. If you don’t get there first thing in the morning, save the Crown Jewels for last and the line will most likely shrink. Even so, it moves fairly quickly. 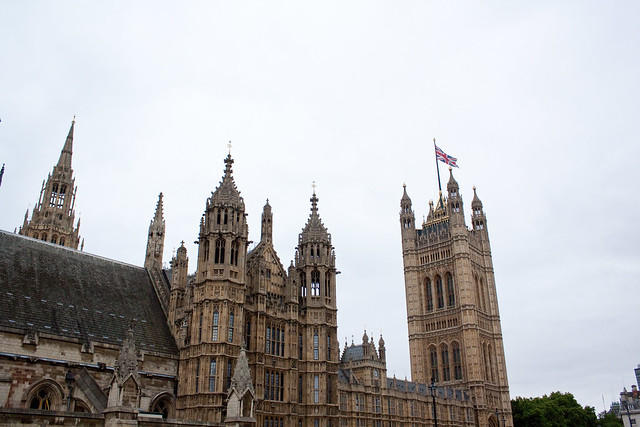 Nando’s (lunch or dinner, lots of locations around London): Chicken makes everyone in our family happy. It was delicious, and I would definitely recommend it while traveling with kids.

Sample lots of candy! Elena recommends you try Haribo Wine Gums, the Flake bar, the Lion bar (my favorite), and Malteasers (like a Whopper, only somehow better).

Comfort Inn London (Westminster). Our very first hotel experience abroad was laughable … after we’d moved on and stayed in much better places! The hotel was in a great location, in a nice neighborhood and very close to Victoria Station. Our actual room? We were in the basement of the hotel, with one tiny window that looked out to a stairwell. There was no air conditioning, but thankfully it was cool. If you tried to open the window, you’d find no screen … so anyone could climb right into our room. I knew hotel rooms would be small by American standards, but this was miniscule! We had 2 twin beds for the four of us, and there wasn’t enough room for two people to pass each other on either side of the beds. Mike and I slept in one twin bed for 3(!) nights! We joked that you could wash your legs in the shower and use the toilet at the same time. BUT … Mike had reward points and the hotel was free. You can put up with a lot for free. That being said, I’d definitely look elsewhere for a hotel when you stay in London.

Cheerio, London! Next up: Barcelona.