For as long as I can remember, picture day has always been in the fall. So when the flier came home in Eli’s backpack for spring photos, I promptly dismissed it as something for the kids who had missed picture day in the fall. The morning of spring picture day unfolded like any other. I let Eli pick his own outfit, which on this particular day consisted of the world’s saddest Andrew Luck jersey* and a pair of sweatpants that, due to a recent growth spurt, are bordering man-pri  territory. To top off the look? Brown shoes with no socks. We left for the bus stop without a big emphasis on brushing hair or removing the crusty yogurt mustache. We have more important things to tend to, like sleep. And Plants vs. Zombies.

Normally this is how most of the kids roll. It’s bed head and mismatched outfits galore at the bus stop. Not this morning. As we approached the bus stop, I realized there must’ve been some fine print on that flier I neglected to read. Every kid at the bus stop had shirts that matched their pants and snazzy hair. Eli looked at me in a panic, but I assured him it was fine. I think he bought it, even as I tried to spit-comb his cowlick into submission.

We never actually buy school pictures, but this might just be the year to splurge on the full package. I can’t decide which one I prefer.

Ratty Andrew Luck jersey by the river? It’s a good thing he wore his waders, in case he wants to venture into the water without getting those nice sweatpants wet. 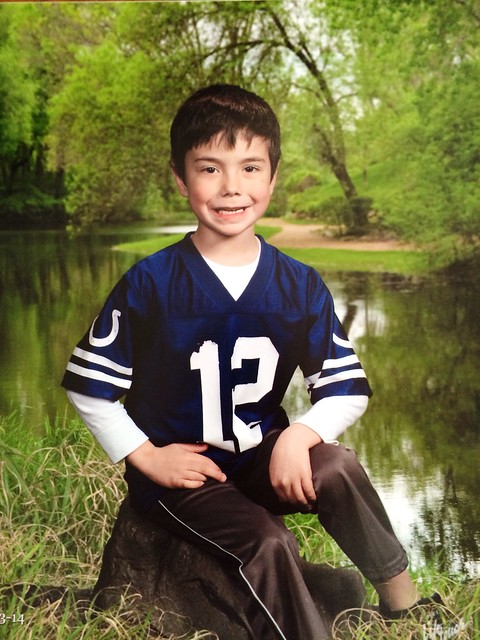 I do believe that kid is flipping me off.

Or perhaps Ratty Andrew Luck jersey by the seaside is a better choice. I mean, it is a jaunty look. 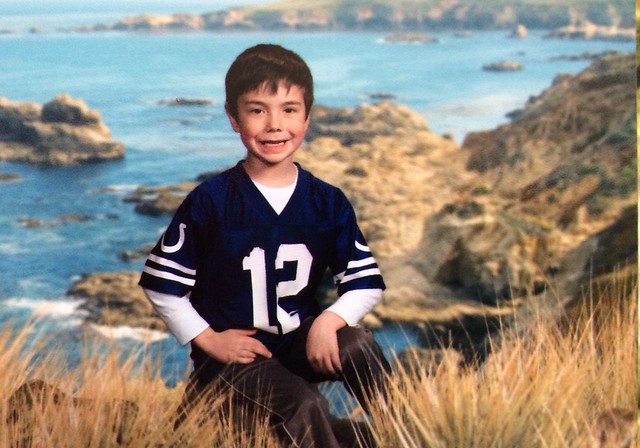 The bird still flies at the seashore.

I wish I could say this has never happened before, but sadly that’s not true. Shortly after Eli was born, I sent Elena to school dressed in the outfit of her choosing – floral leggings and a clashing, paint-stained summer camp t-shirt. If her hair was brushed it was a miracle.

“How was your day?” I asked her upon picking her up from school.

“Great!” she replied. “The picture man said he really liked my camp shirt.”

At least no one can say I show favoritism when it comes to picture day #momfails.

* So I found this jersey during Andrew’s first season with the Colts at a consignment sale and thought I’d found the steal of the century because it was $5. And then I washed it one time and all the letters started to peel off. It’s now an official Andrew “uck” jersey, as the “L” fell off. Andrew just finished his second season, yet I’ve seen Jeff George jerseys in better condition.