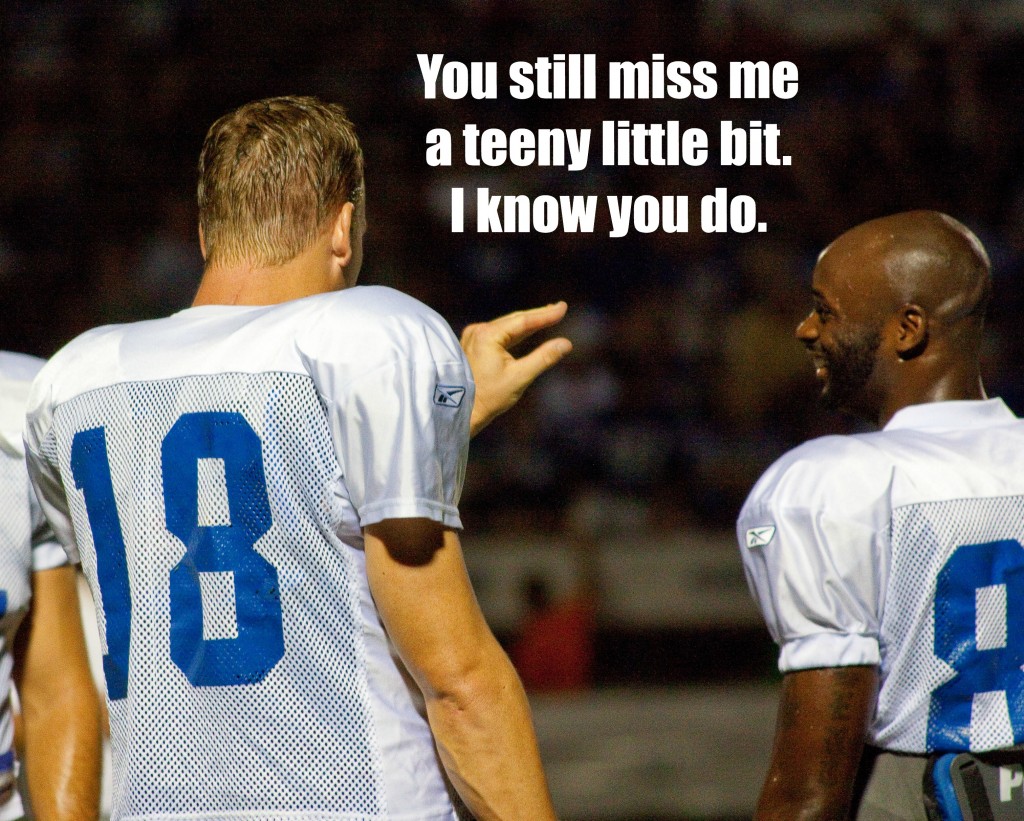 I’ve had no less than 3 dreams in the last week about Peyton Manning.  Oh, stop it.  Not those kind of dreams. I fully realize that I think about Peyton more than the average girl, but even this is ridiculous for me.  While I wasn’t complaining, I was a little perplexed.  And then it hit me – it’s the one-year-anniversary of our break-up.

Breaking up with Peyton Manning was the hardest (sports) thing I’ve ever done.  Harder than seeing Tom Brady reign victorious over us too many times.  Harder than losing Super Bowl XLIV to the Saints.  Harder than watching Curtis Painter take a snap.  You get the idea.  As if losing Peyton wasn’t hard enough, I had to sit by and watch as nearly the entire team I knew and loved was dismantled.  Goodbye, Jacob Tamme.  Goodbye Jeff Saturday.  Goodbye Dallas Clark.  Thank God Reggie Wayne stayed.  He was the girlfriend I called, drunk at 2 a.m.  “Why’d they leave me?  Why, Reggie, why?”

A new football season came around and there were so many new faces.  I promised I would give Andrew Luck a chance.  I wanted him to be so much more than The Rebound Guy.  Maybe you didn’t hear, but he turned out to be quite a catch.  He won a few clutch games for us, led us into the playoffs, rallied around an ailing coach, participated in the community.  He’s the guy that not only takes you on a date, but listens to your dumb stories, pays for dinner, and then calls you the next day.  I bet he even sends flowers.  For all this I could forgive him for not being Peyton.  I could forgive him for the neck beard. In short, we got damn lucky in Indianapolis.  Yes, we wanted things to end differently with Peyton. Yes, we should brace ourselves for some rough seasons before we get anywhere near the Lombardi again.  But still, we have it good.

For someone like me, who loves Peyton with all her football heart and soul, but has room in her heart for a guy like Andrew Luck, last season was just about the most fun I’ve ever had.  I wish nothing but the best for Peyton, so to see him come back and do so well, even in another uniform, made me terribly happy.  I would never wish a life-threatening illness on my worst enemy, but to see the way the Colts lifted up Coach Pagano (and an entire city) was one of the most inspiring stories in sports.  It was exhilarating each week to watch the rookie quarterbacks from all around the league light up the field.  It was a good season, one that healed my broken football heart – as cheesy as that sounds.

I’m still sad about Peyton belonging to another fan base.  I do not think orange is his color.  He is my favorite player, he is the reason I came to love football, he is a Colt.  He’ll always be my first (football) love.

At the end of the day (or season), it comes down to more than just winning and losing. It becomes bigger than what uniform the players you respect the most wear.  Simply, it’s about more than football.   It’s about being thankful that we had a guy like Peyton Manning in the first place.  A guy who not only left us with a Super Bowl Championship, but who left his name on a children’s hospital as well as countless other causes we’ll never know.   It’s about cheering him on as he takes the time to visit troops.  Andrew Luck had some big shoes to fill here in Indy.  I’m thankful that he seems to be settling into them just fine, both on and off the field.
At some point during the season I realized that (football) life goes on. Just like in real life, you gotta put away the old love letters and prom pictures and move on … even if your old flame keeps showing up in your dreams.  And you know what?  A girl could do a lot worse than Andrew Luck.