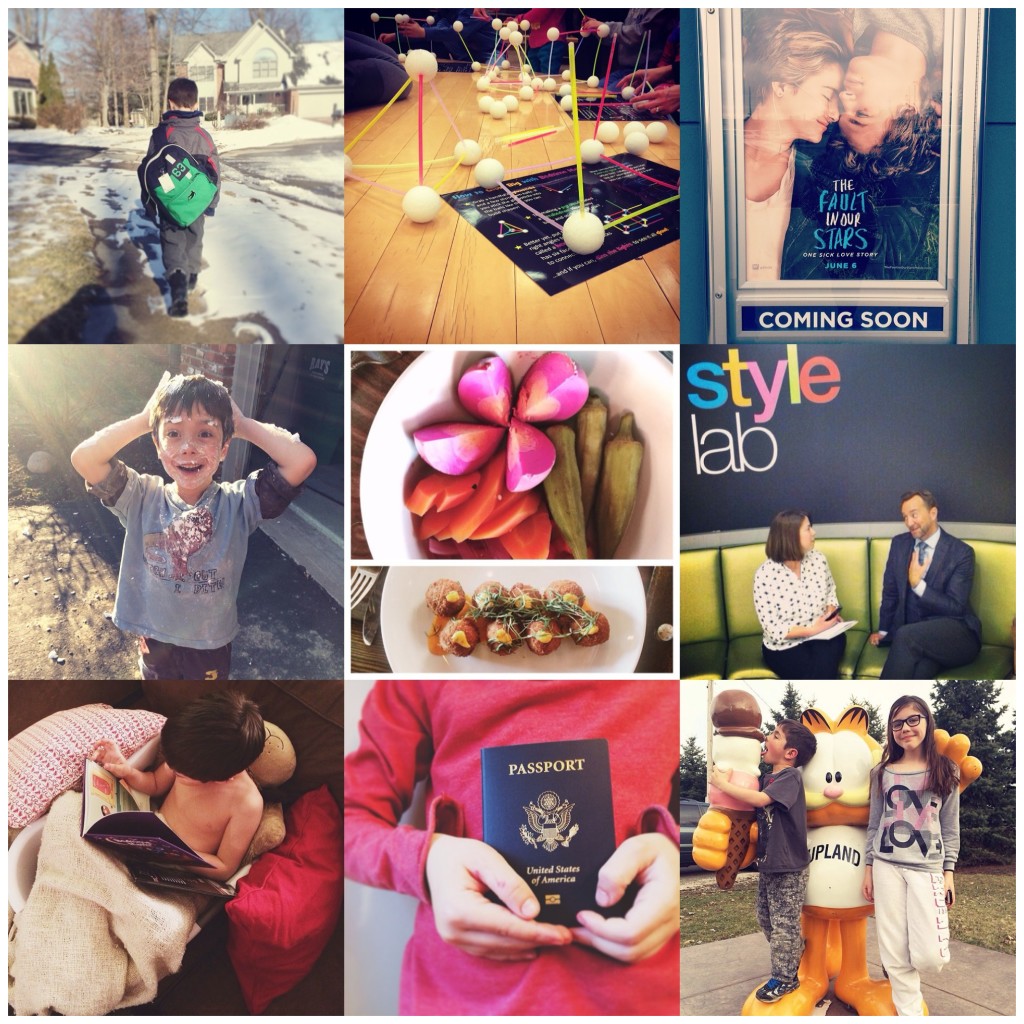 1.  You know how you can see your kids every day, and they seem exactly the same, then one day you look at them and they’ve aged overnight? That’s happening to me with Eli. I swear he woke up the other morning and he’d grown a full inch. And then this particular day, he got off the bus, slung his backpack just so, and I had visions of him as a teenager. To which I say I DON’T THINK SO. NO SIR.

2.  Exciting news from the site I write for, Bedtime Math. Their second book

was released last month. Our local bookstore hosted a special story time to celebrate, which included making some 3D shapes with glow sticks and styrofoam balls. Eli shoved a few extra balls in my purse that night. I got a good chuckle the next morning when he asked me if his balls were in my purse.

3.  Elena and I are so incredibly excited for The Fault In Our Stars movie to come out in June. Can’t get here soon enough! Have you read the book

? We’re both John Green fangirls, not-so-shamelessly stalking his Instagram feed and hoping one of these days we run into him somewhere in Indianapolis.

4.  Sunshine plus an entire can of shaving cream mixed with cornstarch equals one happy (and very messy) boy.

5.  A portion of a meal I shared with friends at Thunderbird, a new bar and restaurant in Fountain Square. A couple of times a year I have the pleasure of getting together with these friends. It’s an interesting cast of characters: a writer/graphic designer I first met on a couples’ blind date, a restaurant review blogger, a food blogger, and a Master Food Preserver, and a fellow blogger. We share a love of really good food, and I happily tag along so I can eat at all the restaurants Mike would never want to set foot in. (The photo, by the way, depicts the pickle plate and ham croquettes.)

6.  Look at me! Interviewing Clinton Kelly like I know what I’m doing!

7.  For a couple of weeks in March, Eli had a little laundry basket obsession. He asked to read stories on the couch, and this is how I found him. He also spent several nights sleeping in the laundry basket. Just add it to the list of things that will make him awesome in college: prefers to be shirtless, loves a good frozen waffle, oblivious to bad smells, and can easily sleep in small spaces such as bathtubs (the grownup equivalent of the laundry basket).

8.  The kids’ passports arrived! We also purchased our airline tickets this month as well. Spain will be here before we know it!

9.  Over Spring Break the kids and I paid a visit to my niece, who lives near Fort Wayne. Ivanhoe’s, the Taylor University student favorite, is right off the interstate, about halfway between Fort Wayne and Indy. They serve food, but they’re famous for the ridiculous menu of treats: 100 varieties of shakes and 100 varieties of sundaes. We’ve tried to stop several times on weekends, but it’s always been too packed. On this trip we were finally able to get in the doors. In case you can’t tell, Eli has a deep (and potentially infectious) love of ice cream.