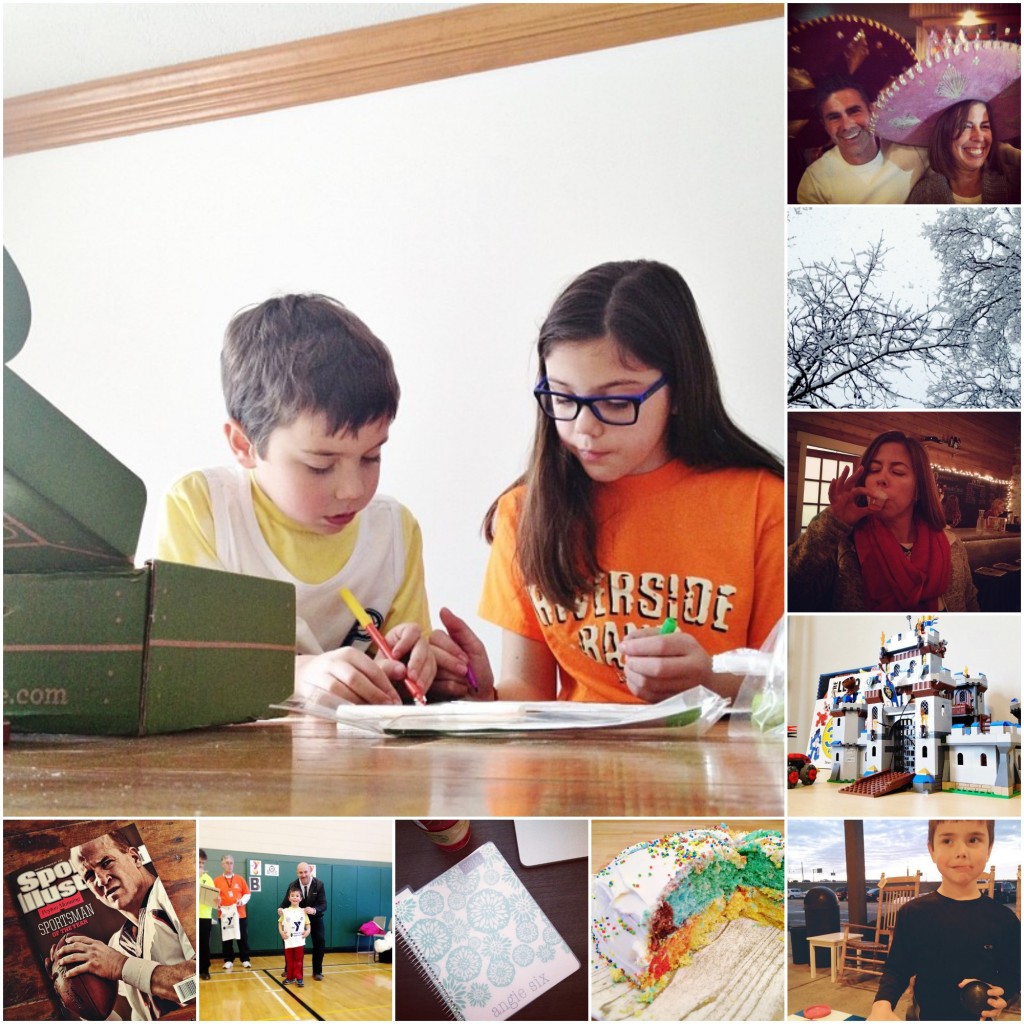 1.  With all the nasty weather, delays, and school closings, we’ve been spending lots of time inside. TOGETHER. It never ceases to amaze me how well Elena and Eli get along when they work on a Kiwi Crate together. I don’t know what kind of crazy ju-ju the sprinkle in those green boxes to make it so, but I love them for it.

2.  We celebrated my 39th birthday and my brother’s 50th birthday in Nashville. Sombreros make everything more awesome.

3.  We cut the above trip short abruptly so we could get home before this snow storm hit on January 5th. Since then we’ve missed 6 days of school, had 4 two-hour delays, and I haven’t seen the grass or a day above 40 degrees.

4.  I spent a fun Saturday evening celebrating a friend’s 40th birthday on a bus tour of several local breweries. So much delicious beer, so little time!

5.  Eli got a LEGO castle for Christmas. Two weeks and nearly 1000 pieces later, he has this to show for it!

6.  January 13th marked the one-year anniversary of my father-in-law’s passing. Paul loved him some Cracker Barrel, so Eli and I had a dinner date there and shared some of our favorite memories.

7.  Elena made a rainbow cake after she saw one on Pinterest … and she actually nailed it!

8.  I just can’t quit a paper planner. My favorite one was discontinued, so last year I tried an Erin Condren planner. I liked it, but couldn’t quite stomach the price tag again this year. I found this one on etsy from Plum Paper Designs and I love it.

9.  We signed Eli up for basketball at the Y. He’s on the Butler Bulldogs, and he’s having such a good time. He had his first game last week. After he made his first game basket, he sprinted to the middle of the court and busted out some breakdancing moves. I’m pretty sure that’s frowned upon, but I loved it.

10. Mike came home with this issue of Sports Illustrated for me. I’m such a fool for that guy – I cried when I was reading it! I so wanted him to take home another Super Bowl ring this year.