As a member of the Everywhere Society, I was compensated for this post. However, all thoughts and opinions expressed herein are my own … and Elena’s! 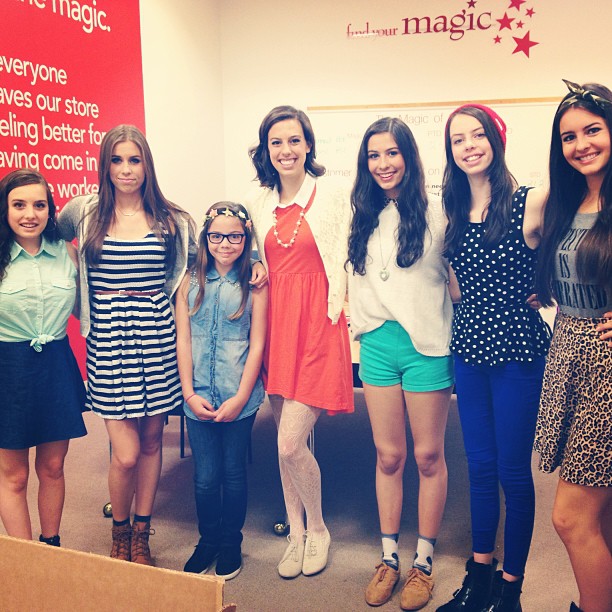 I’ve been blessed through blogging to experience some really cool things and meet people with whom I would never normally cross paths.  The best experiences, though, are the ones that I get to share with my kids.  Last weekend was one of those memorable moments.

Radio Disney partnered with Macy’s to bring Cimorelli, winner of the Teen Choice Award for Choice Web Stars and Radio Disney Music Award nominee for Biggest Viral Artist, to Indianapolis for a fun Back to School event. In addition to a Meet & Greet with Cimorelli, young fans and fashionistas were able to shop from Macy’s Back to School must-haves and party along with Radio Disney. I was given the opportunity to interview Cimorelli. I knew right away this was a job for Elena. She was already a big fan and thought she knew the girls well, but she became a journalist for the day and prepared her best questions for the band. My heart was full and I was so proud, watching her hold in her fangirl and conduct her interview like a professional! It helped that the Cimorelli sisters (yes, all six of them!) were so kind and eager to answer her questions thoughtfully. I’ve never met such a lively, talented and interesting group of girls. They encouraged Elena (and the rest of their fans) to follow their passions, read as much as you can, and be who you are without worrying what other people think. I don’t encourage my kids to use celebrities as role models, but if Elena wants to look up to these girls as examples of how to be creative, smart and fashion-savvy? I’m so okay with it. Enough of me being the blog-hog! Here is Elena’s blogging debut! Last Saturday I met some of the most awesome girls ever, Christina, Katherine, Lisa, Amy, Lauren, and Dani Cimorelli. Who are they? They are the 6 sisters who make up the band Cimorelli. I’ve been a big fan of them for a long time. On this day, thanks to my mom and Radio Disney, I had the opportunity to interview Cimorelli. I was so nervous! Once I walked in the room and met them I was totally fine. The girls were very nice and got us chairs to sit in. They introduced themselves and then I started asking the questions I came up with ahead of time. I asked what their goals for the furture were, who their idols were, and what their hobbies were other than singing. I loved all of their outfits! I was about to wear the same shoes as Lauren, but at the last minute I changed into a different pair. That would’ve been so cool! One really cool thing that happened was that after I finished my interview, they took a picture with me and posted it on their Instagram! When the interview was over we walked down to the Macy’s kids department. Radio Disney was doing lots of fun stuff to entertain the crowd that was waiting for Cimorelli. The line was really long! My mom and I got in line with the other fans so I could get their autographs. Before I knew it, it was time to leave. If you don’t know Cimorelli, you should! Here are 7 things you might not know about Cimorelli:

There are several more Back to School with Radio Disney events being offered at select Macy’s stores throughout the country in September. Check here to see if there is an event near you!