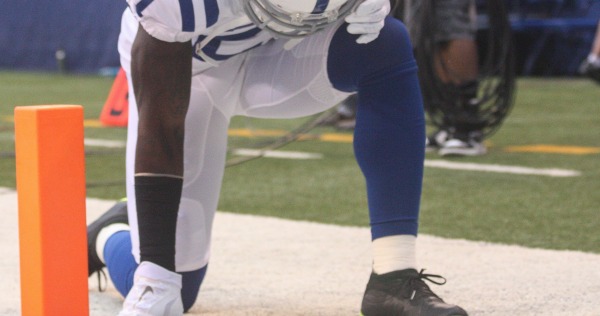 Sunday afternoon found me sitting in the stands at Lucas Oil Stadium, preparing to watch the Indianapolis Colts take on the Cleveland Browns. We were guests of the Colts, as Eli won a promotion to be the Kickoff Kid. Have you seen the dog on the sidelines of Boise State games? That was Eli on Sunday after the Colts kicked off, flying across the field to retrieve the tee. He was elated, and it was fun to watch. One of the perks of being a guest was that we were seated in the first row right next to the Colts bench. When the national anthem was being played, I wasn’t able to see the players from the angle of our seats. But I heard boos, and so I could make a pretty bold guess as to whether or not any Colts or Browns players took a knee.

I’ve been thinking a lot about how I feel about the President’s comments regarding NFL players and protests. Several times over the weekend I was poised to add my voice to the discussions on Facebook and thought better of it. What could I possibly add to the conversation? Why fuel the fire, or make myself vulnerable to the judgement of others? And so I walked away from Facebook and vowed to get on with my life. The uneasiness and frustration continued to build within me, and that’s when I decided I had to say something. Because as a 42-year-old upper middle class white woman, I have the option to get on with my life. I have the privilege of being able to go about my days in my suburban bubble, where none of the reasons hundreds of black NFL players knelt for will ever affect me. By not saying anything, you might assume I feel as many other of my fellow football fans feel: that kneeling during the anthem is the ultimate form of disrespect for our country and the soldiers who serve it, and that players should stick to sports or leave the game. Here’s the short version if you don’t want to stick around: I don’t share that opinion.

As I sit here and try to understand why I’m so particularly angry about the reaction to players kneeling, I think it boils down to this: I’m sick and tired of people taking the easy way out. You see, it’s easy to see black players kneeling during the anthem and call them sons of bitches. It’s easy to call them names and demand that they shut up and enjoy their millions. It’s easy to assume that fame or fortune protects people of color from racism. You know what’s hard? Putting your own opinions aside for a moment and listening to what they’re trying to say. It’s hard to imagine yourself in someone else’s shoes. It’s hard to admit that you have struggles and they have struggles, but acknowledging their struggles doesn’t make yours smaller or less important. It’s hard to think about the fact that the America we know and love isn’t always a nice place to live if you’re different. It’s hard to realize the default for most white people is to tell black athletes this: Be grateful. Entertain us. Help us win our fantasy games. Know your place.

It’s not just about race, either. There are plenty of social issues we face in this country in which we choose the easy over the hard.

It’s easy to blame people for being poor, for depending on welfare and unemployment. It’s harder to give someone a second chance after prison and offer them a job. It’s harder to make quality, affordable child care an option for working parents.

It’s easy to shame women about seeking abortion or contraceptive care. It’s harder to do the work of putting systems and policies into place to help women care for their babies.

It’s easy to make drug addiction a criminal justice issue; to throw people in jail and hope they’ll come out better people. Or never come out at all. It’s harder to treat an addict with compassion and to recognize and treat drug use as a medical problem.

It’s easy to share memes on Facebook about how Christianity is under attack because someone say “Happy Holidays” to you instead of “Merry Christmas.” It’s harder to act as Christ would have on this Earth, and sponsor a family for Christmas in your own city.

It’s easy to attack someone’s level of patriotism based on how they voted, or if they kneel during the anthem. It’s harder to look at the living, breathing veterans in America and see how we fail them each and every day when it comes to mental health care and supporting military spouses and children.

I have no patience left for easy.

If you are equating kneeling during the national anthem with disrespect for the flag or our veterans, you are taking the easy way out. It’s not disrespectful, and it has absolutely nothing to do with your love for America or your support for its veterans. Rosa Parks wasn’t protesting bus transportation when she sat at the back of the bus and Gandhi wasn’t protesting food during his hunger strike. What these agents for social change did so effectively was take a long-held social norm and turn it on its head in an effort to get people to pay attention. And perhaps if people pay attention, we can talk about the problem and find ways to move forward.

Kneeling during the national anthem gets our attention because it goes against a tradition and social norm that we hold very dear to our patriotic hearts. I’ll be the first to admit it: when I saw Colin Kaepernick take a knee, I was uncomfortable. But the more I think about it, the more I challenge my own biases and gut reactions. I realize that taking a knee is the opposite of disrespect for America. It’s a humbling plea: I love this country as much as you do. Let’s make it better together.

Trevor Noah asked, “When is the right time for black people to protest?” When would it make you comfortable? Let me guess: when you don’t have to see it. In this day and age when we have the attention span of squirrels, it takes something of this magnitude to get us to stop and pay attention. And so here we are now, paying attention and feeling lots of big feelings. What will you choose? The easy way that leads to more of the same? Or the hard way that leads to something better?