You can smell them before you see them. It’s the fragrance of carbs hitting hot oil. But underneath the ubiquitous deep fried smell that goes hand in hand with an outdoor market or fair in the summer, there’s something else. An exotic smell that you don’t usually expect when you catalog the odors of Indiana fried foods: egg rolls. For as long as I’ve been visiting the Fishers Farmer’s Market, Mathoo’s Egg Rolls has been there. When I strolled by the first time, I was amused. Egg rolls? At 9 a.m.? Sandwiched between the guy tossing bags of sweet corn to customers and the vendor selling every part of the cow you can imagine, she seemed just a little out of place. Perhaps knowing this, she offered samples. This woman was no fool. She knew all you needed was one bite of her freshly fried egg rolls, dipped in her homemade sauce. One taste and you wouldn’t be chuckling anymore. You’d be handing over your wallet. 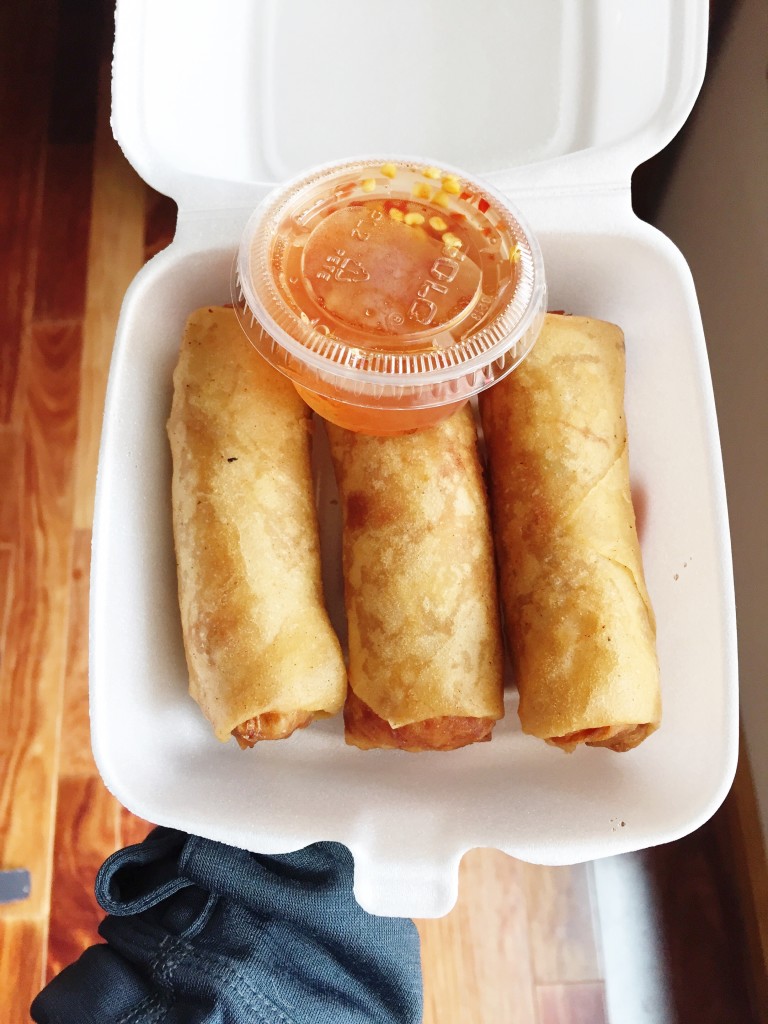 It didn’t take long for the doubters like me to turn into weekly customers. The following year there were no samples. If you wanted to know if the egg rolls were worth buying, you only needed to look at the line. It was always there, growing as the morning went on until the saddest words in the English language were delivered to the poor, egg roll-less souls: “Sorry! All sold out today!” When she folds up shop for the day, you know you won’t be able to get your egg roll fix again until the following Saturday (unless you foolishly sleep in). When the Farmer’s Market packs it up for the season in the crisp and cool days of fall you panic a little. You see, they don’t sell egg rolls out of a brick and mortar store or a roaming food truck. Egg roll season, while a blissfully long season by farmer’s market standards, is over when the market is over. And while your belly may enjoy a little break in November, by December you’re jonesing for more. The opening day of the market in early May is kind of pitiful. Strawberries if you’re lucky, radishes, some tender greens here and there. But that first bite of egg roll, always ripe and perfect after months without that taste in your mouth, is a beautiful thing.

Last spring, we spent a week in California. It was our first visit out west, and we were thrilled to try foods and restaurants we don’t have in Indianapolis. Driving through LA, I spotted a Shake Shack. I’ve had it before, but Mike and the kids were Shack virgins. As we tore into our burgers and shakes, we mused about how wonderful it would be to have one in Indiana. The idea isn’t crazy – it is a chain, after all, and there’s one in Chicago. Eating that first egg roll of the season shortly after we returned from California had me second guessing our wish.

The beauty of the farmer’s market egg roll and the Shake Shack burger, along with the countless other foods we crave and make travel plans around, is the anticipation. It’s remembering the taste, the people you shared it with, the “otherness” of your life when eating it. Whether it’s the way food tastes better when your on vacation or when the season of your life while consuming it is different, it’s something that can’t be easily replicated. The egg roll itself isn’t a work of culinary art. It’s an egg roll … a well-made, freshly fried egg roll, sure. But it’s still just an egg roll. It tastes magnificent because no matter how much money you have, no matter how much you need one on January 17th, you can’t have one. It’s the same with a Shack burger, or the shrimp you boil in your beach house, a Sonic cherry limeade on a road trip, or the ice cream we used to eat in the Malley’s gazebo in northeast Ohio. You can replicate any of those things at home, or open an outpost next to all the other familiar chains on the highway. It won’t taste the same.

I’m human and terrible at waiting for things, and so I still long for certain shops and restaurants to open in my hometown. And living near Indianapolis, it does happen. I got my wish and a Container Store appeared a few years ago. I can get in my car and ten minutes later be eating a freshly scooped dish of Graeter’s ice cream. Next fall I’ll be able to ride my bike to an IKEA and feast on lingonberry juice and Swedish meatballs. I’ll gladly trade in our Zaxby’s for a Raising Canes. But I also recognize that having these things available at a whim takes away their specialness. No longer do I block out two hours to walk the aisles of Container Store, or feel the delicious anxiety of wondering whether I want a scoop of Black Raspberry Chip or Bourbon Ball. I can pick up a cute container to organize my office supplies on a Thursday at 9 a.m. I can come back tomorrow and get whatever flavor I didn’t choose today.

That won’t stop me wishing for a Shake Shack or a Jeni’s Ice Cream right around the corner. But if the genie in the bottle knows what’s good for us, he’ll keep our cities just different enough to encourage us to wait and wander for the things we wish for.