As of today, there are 22 days until Christmas. In my home, that means that the creation of the holiday wish list is in full frenzy. It starts just before Thanksgiving and grows exponentially as the season progresses (Eli’s list can grow by 5 items a day if he’s watching something with commercials), culminating in a few last minute requests as we set the table for Christmas Eve dinner. 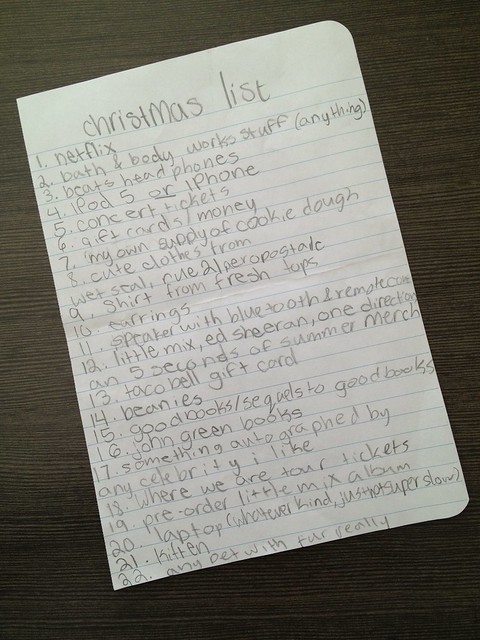 The kids know that more items on a wish list don’t translate into more presents under the tree, but I don’t stop them from dreaming. They always wake up full of joy and wonder, even if 90% of the wish list never materializes. I remember spending hours with the telephone book-sized JC Penney catalog, carefully writing out each and every thing I might want, complete with price and item number to make it as easy as possible for my parents and Santa. I don’t recall a single gift that came from those impossibly long lists, but I have plenty of warm and fuzzy memories of dreaming of what might be. So I don’t worry that Eli’s list is a mile long or that Elena had the audacity to ask for braces one year. Kids aren’t greedy – they’re just holiday dreamers.

Still, over the years Mike and I have struggled to find balance in fulfilling their holiday wishes. In the frenzy of holiday spirit and Black Friday/Cyber Monday “deals” that seem to last for weeks as opposed to days, it’s easy to get swept up in buying. Some years we’ve purchased a set number of gifts, other years we’ve gone with the template of “something you want, something you need, something you wear and something you read.” Santa brings each child one special gift and fills the stockings. Even with our mindfulness towards excess and overspending, Christmas in the Six home still brings with it a significant price tag and an influx of things that lose their specialness long before the winter snow has melted.

For that reason, we’re trying something drastically different this year. Instead of buying gifts for Elena and Eli, we’re presenting them with a very special family gift on Christmas morning. I can’t give details on the off chance that one of my offspring decides this would be a fine time to catch up on Mom’s blog, but we’re very excited about it. We sat them down over lunch last week to share this with them, as we didn’t want to spring such a drastic change in the way we do Christmas as they’re coming down the stairs Christmas morning. We started off the conversation quite seriously, with Mike beginning: “We’re doing something different for Christmas this year.” Before we could say anything more, Eli chimed in. “We’re going to church?”

After several minutes of laughing followed by serious questioning regarding the religious upbringing of our kids, we moved on to the details. Santa will still visit, you’ll still have something to unwrap, and we think you’re really going to love what we have planned. They were satisfied, we’re excited, and yes – we’ll go to church on Christmas Eve … like we always do, Eli. Even with this knowledge, it hasn’t stopped the excitement of creating their holiday wish lists. Their lists are drastically different both in length and in interests (Eli’s is all over the place, Elena’s is 99% music and art), but there is one item that made it on both lists as soon as they knew it was an option: Just Dance 2016. 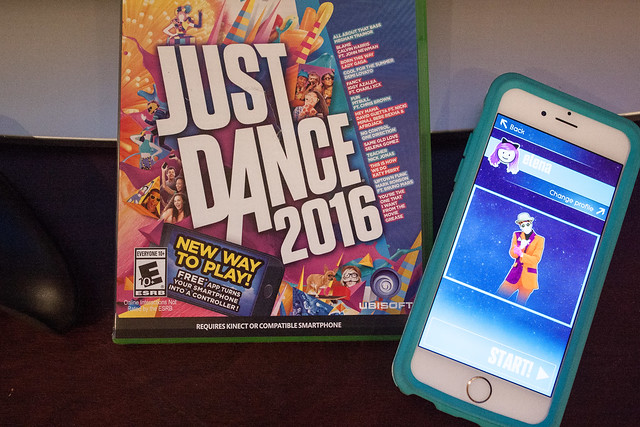 We’ve been huge fans of the Just Dance series of video games since I won a copy in a dance-off. (Yes, you read that right.) We’ve been known to plan entire parties around an excuse to dance with our friends, young and old. Of all the video games we own, Just Dance is the only one that our entire family enjoys playing together. Last year we switched gaming platforms, moving from the Wii to the Xbox. We were beyond bummed when we realized that without the Kinect Sensor we couldn’t play the game we loved. When I learned that Just Dance 2016 comes with a sweet new feature which allows players on new-gen consoles (like our Xbox One) to use a smartphone to play in lieu of the Kinect Sensor, I knew we had to have it.

Thanks to the Clever Girls, we had the chance to move Just Dance 2016 from our holiday wish list to our basement gaming station. The kids were so excited to open up this early Christmas gift and get their groove on. And just like every previous version of Just Dance we’ve ever owned, Just Dance 2016 is an instant hit with the whole family. 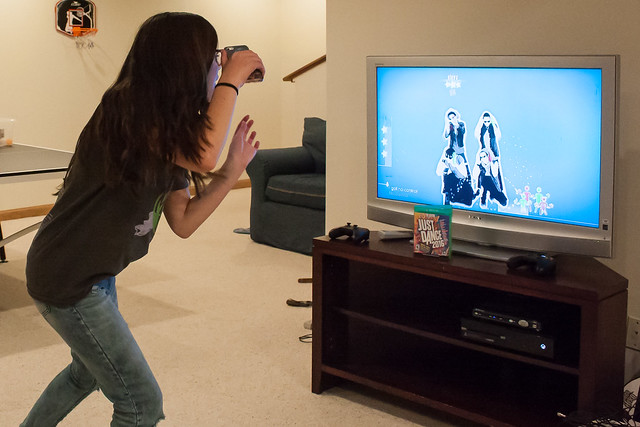 Setting up the Just Dance Controller App through iTunes is super easy and fast. We have several generations of iPhones and iPod Touches, and it works equally well on all of them. All you need is iOS 6.0 or greater along with a Wii U, Playstation 4 or Xbox One console. The app is also available on the Windows Store and Google Play. 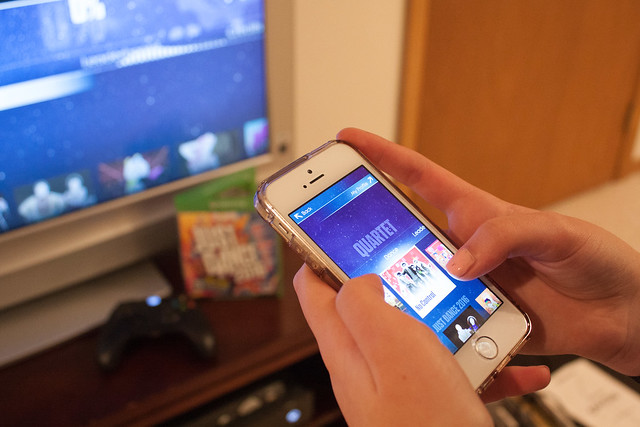 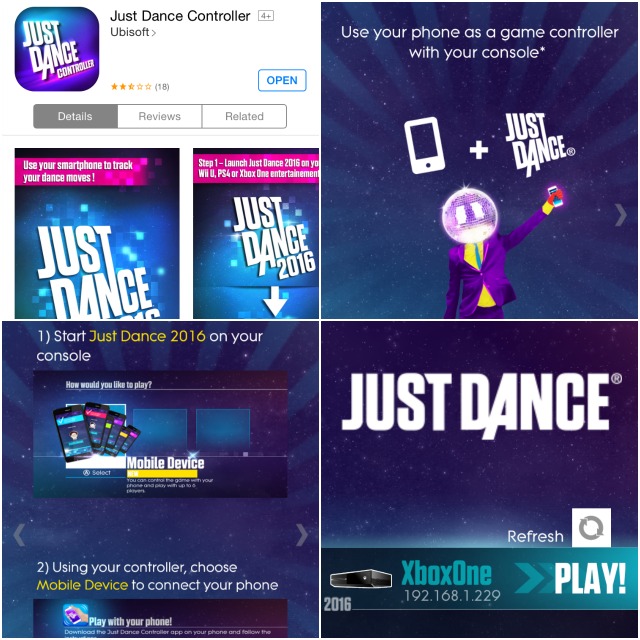 And just how good is the track selection in the newest version of Just Dance? Well, there’s “No Control” from One Direction on it. I’m sorry – did we need any other tracks? I will master Iggy Azalea’s “Fancy” before the new year begins. Elena and I might’ve squealed when we saw “You’re the One That I Want” from Grease in the tracklist. Just Dance 2016 continues the tradition of offering some of today’s hottest and well-known pop tunes with tracks that will appeal to all generations of players.

If you’re looking for a fun family gift that will get everyone moving, dancing and laughing no matter their age or skill level, you can’t go wrong with Just Dance 2016. The fun will last long after the last pine needle is vacuumed up, and it might even offset a few of the Christmas cookies consumed over the holidays. Check out Just Dance 2016, with information on compatible gaming consoles and a complete tracklist, here. 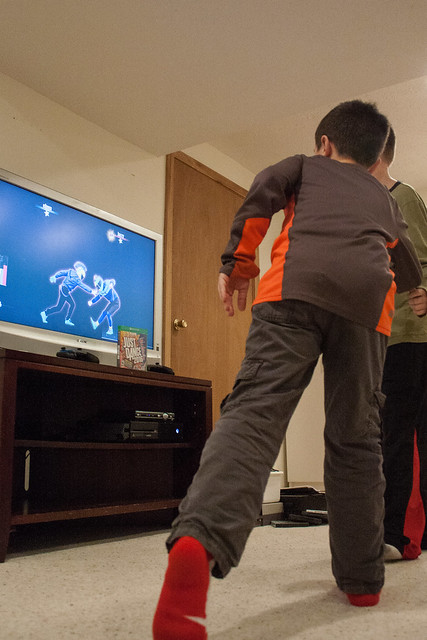 I can’t wait to fill you in on our big Christmas surprise! Until then, you can check out my tips for a simpler Christmas. Looking for more holiday inspiration? Visit my Pinterest Christmas Board. Happy Holidays!

I was selected for this opportunity as a member of Clever Girls and the content and opinions expressed here are all my own.