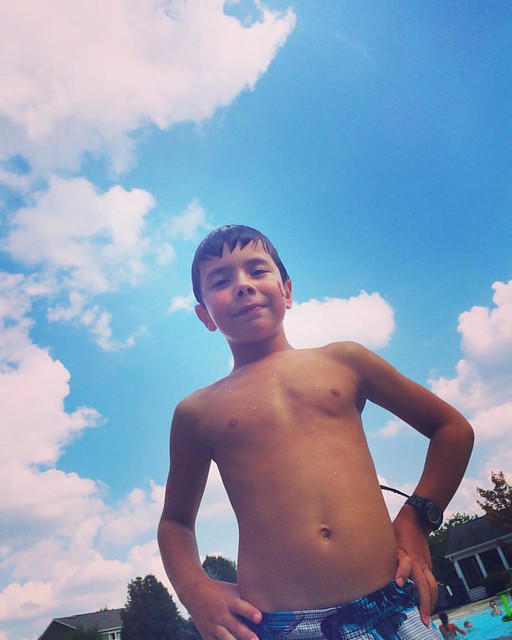 Labor Day weekend was glorious here in Indiana, and we spent much of it soaking up the last days at the pool. We have a membership at a local pool, and it’s one of the best things about summer. We see people there that we never really see September through May, but over the summer they’re some of our best buddies. The kids can buy ice cream and candy for super cheap (we save up quarters all year long for our “Pool Treat Fund”), and the grownups can bring in adult beverages. Many a Friday or Saturday night are spent swimming, eating pizza, and having drinks with friends. We have a Labor Day tradition that if the weather is decent, we’re there, closing the pool down. It’s a good life, and I’m always a little sad on that very last day the pool is open for the season.

In that time between the start of school and Labor Day, the pool cuts back their hours during the week. They’re usually open for a few hours during the day while the kids are in school, though. Every year I say I’ll treat myself to a solo weekday afternoon at the pool, but I’ve never actually followed through. This year I promised myself I’d do it! And so on the very last afternoon the pool was open during the weekday, I took a stash of magazines, a giant Diet Coke, a bag of Twizzlers and myself to the pool. It was sunny, hot and gloriously devoid of children! 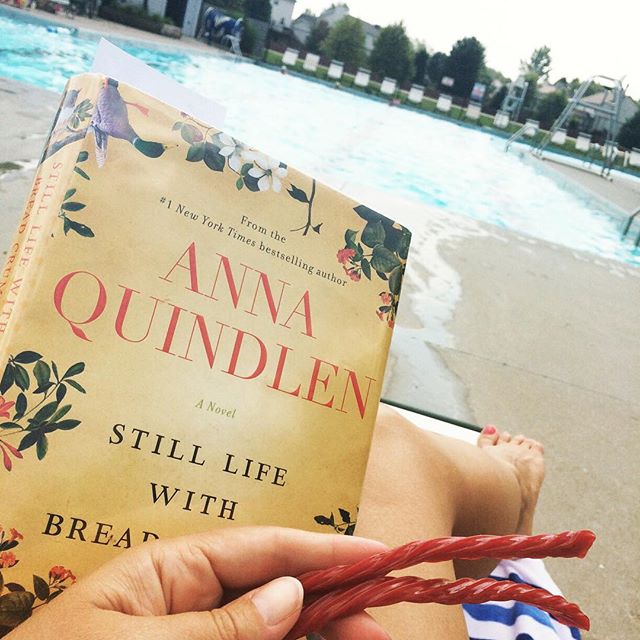 A few days later I was checking over my Fitbit stats. I’m slightly obsessed with tracking my sleep, and as I was scrolling through my sleep cycles, I noticed something unusual. It appeared I’d been asleep for 2 hours on a Thursday afternoon. I couldn’t recall a recent nap, and was stumped. Then I remembered my lazy pool day! I was such a sloth during my grownup pool outing my Fitbit thought I was asleep! Mike wasn’t nearly as amused as I was.

I promise I’ve been doing much more than sleeping and sunning myself since the beginning of September! Here are a few things I’ve come across this month I think you’ll enjoy.

Football, of course! I joked on Twitter that I clearly didn’t train adequately in the off-season for these late night Thursday, Sunday and Monday night games. If you see me in person on Fridays, Mondays or Tuesdays you’ve probably seen the football-induced yawns and dark circles. I’m just so happy to have real games back on, even if my Colts have yet to actually show up for a game.

Other than that, I’m not watching much. I’ll share my Netflix pick for September later this week. Our favorites, Big Bang Theory, Modern Family and The Good Wife are starting up. Do any of the new shows this season jump out at you? Not much is sparking my interest, but I do plan on recording the new Muppets show in hopes we can enjoy it as a family.

I’ve read some really fantastic books in the last couple of weeks that will surely make my Top 10 list for 2015. I’ll be doing another reading update post in early October (so far I’ve covered January-March and April-June). Stay tuned for my reviews very soon! Eli and I are about halfway through Wildwood

by Colin Meloy. Some of the reviews say it’s too long and boring, but we’ve yet to feel that way about it. I imagine we’ll get through it faster as the days get darker and chillier. I just started Etta and Otto and Russell and James

by Gary Rivlin. It’s everything I wanted my other Katrina book I read this year, Five Days at Memorial

, to be. Well-written and gut-wrenching, it makes me both sad and angry at the unnecessary suffering and loss of life that could have been prevented.

Podcasts! Why did it take me so long to get into them? Other than my binge listen of Serial last winter, I haven’t really jumped on the podcast band wagon. But then I started listening to an audio book that just wasn’t working for me. I had lots to do that day and didn’t have time to research which audio book to listen to next, so I decided to subscribe to a few podcasts instead. My favorites right now are The MMQB podcast with Andy Benoit and Robert Klemko (of course!), Invisiblia from NPR, and Gretchen Rubin’s Happier. They might just replace audio books for me for the time being. Do you have any favorites I should be listening to? 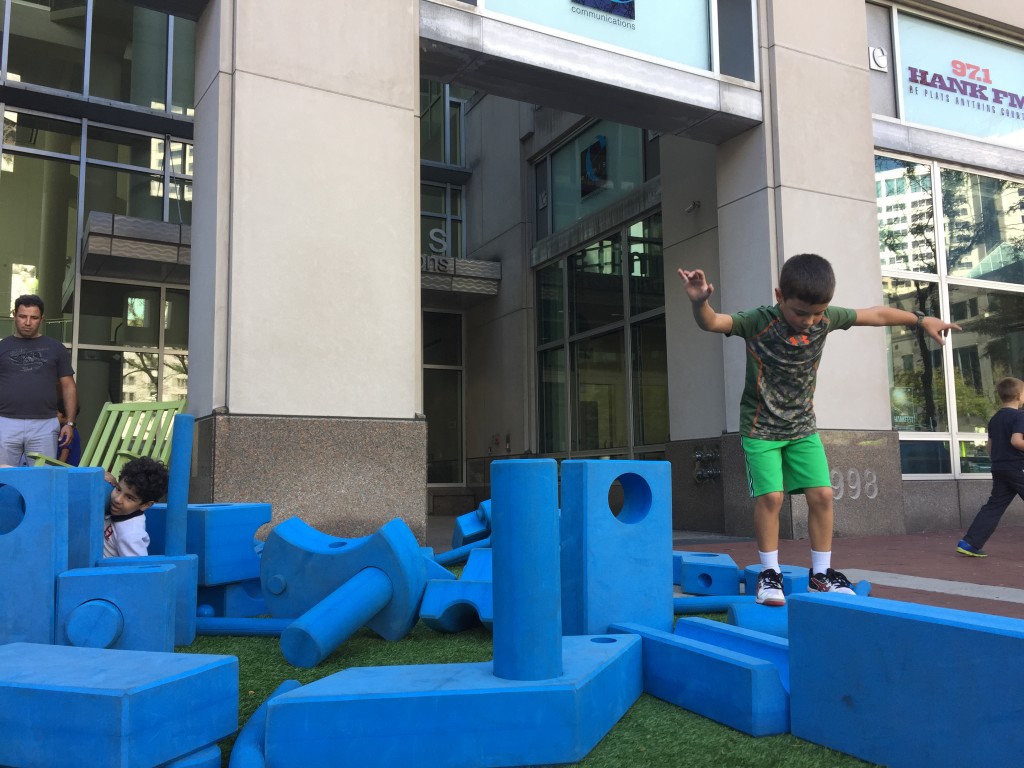 If you live in or near Indianapolis, you MUST check out Spark: Monument Circle. Seven days a week through October 16 you can experience fun and free programming in the heart of Indy on Monument Circle. Spark is a partnership between the City of Indianapolis, Downtown Indy and Big Car Collaborative, and it’s fantastic. Eli and I visited last Sunday and spent a couple of hours on the Circle. We checked out the free lending library, built a giant ball track with foam building blocks, played ping-pong and foosball, and decorated Indianapolis-themed postcards to send to friends. Each day has a special theme, and there’s something for everyone. It was so fun to feel like a tourist in our own beautiful city, and the sight of so many people relaxing, playing and having a good time brought back the feeling of the Spanish plazas we loved so much! Definitely check it out if you can. 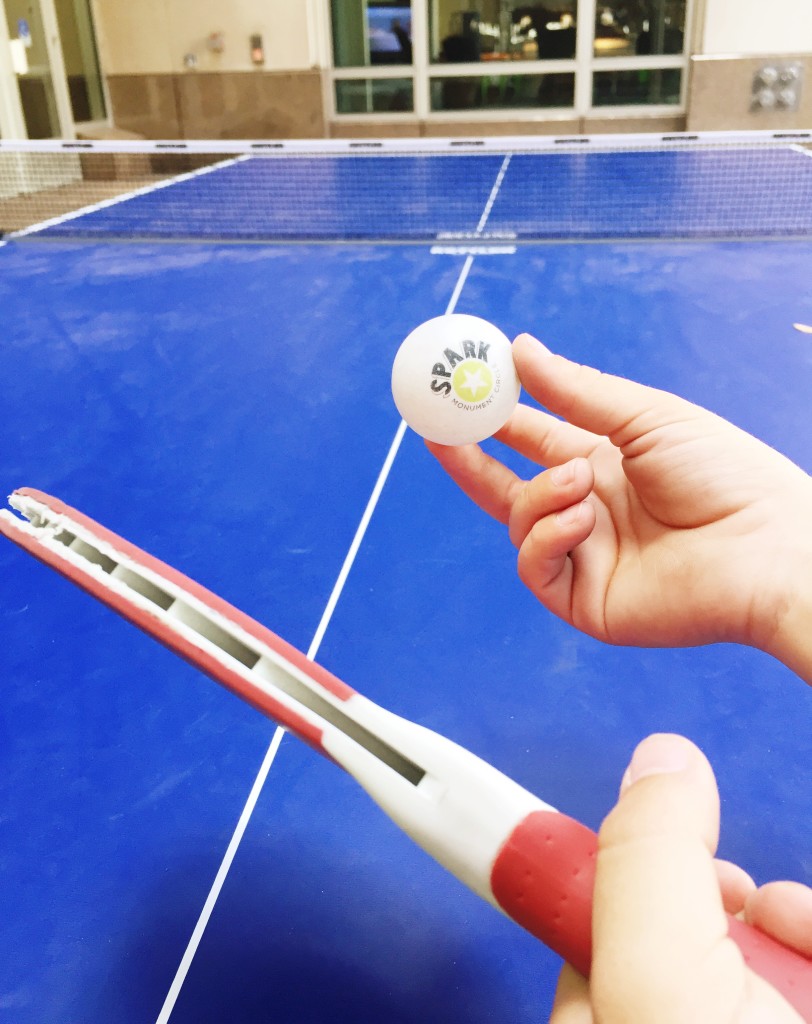 Very timely and wonderful for back-to-school, this piece from Momastary on the conversation we should have with our kids about being kind and brave in school is fantastic.

A hipster Barbie Instagram account. I don’t even want to know how much time this person is putting into this thing, but I’m SO glad they’re doing it. Hilarious.

Thanks to the terrible influence of my friend Katy, summer means drinking rosé. Lots of rosé. I was reading a piece about the rise of rosé and it was referenced as “the Hamptons’ Gatorade.” Between that and the hashtag I discovered (#roseallday), I’m on the bandwagon. Before I switch to all things pumpkin, I’m definitely using one of last bottles for this rosé lemonade.