If that title doesn’t have you thoroughly confused, then I haven’t done my job well. What it translates to is the fact that I forgot to post InstaOctober last month, but I’m too OCD to actually skip a month. As if hordes of you will show up at my front door and say, “HEY, lady. What gives with the missing Instagram highlight reel?” But just in case any one of you are en route, here it is. And I certainly couldn’t handle missing November, or moving every post back two months, because that just doesn’t make any sense. (But this line of thinking clearly does.) I should probably stop talking. 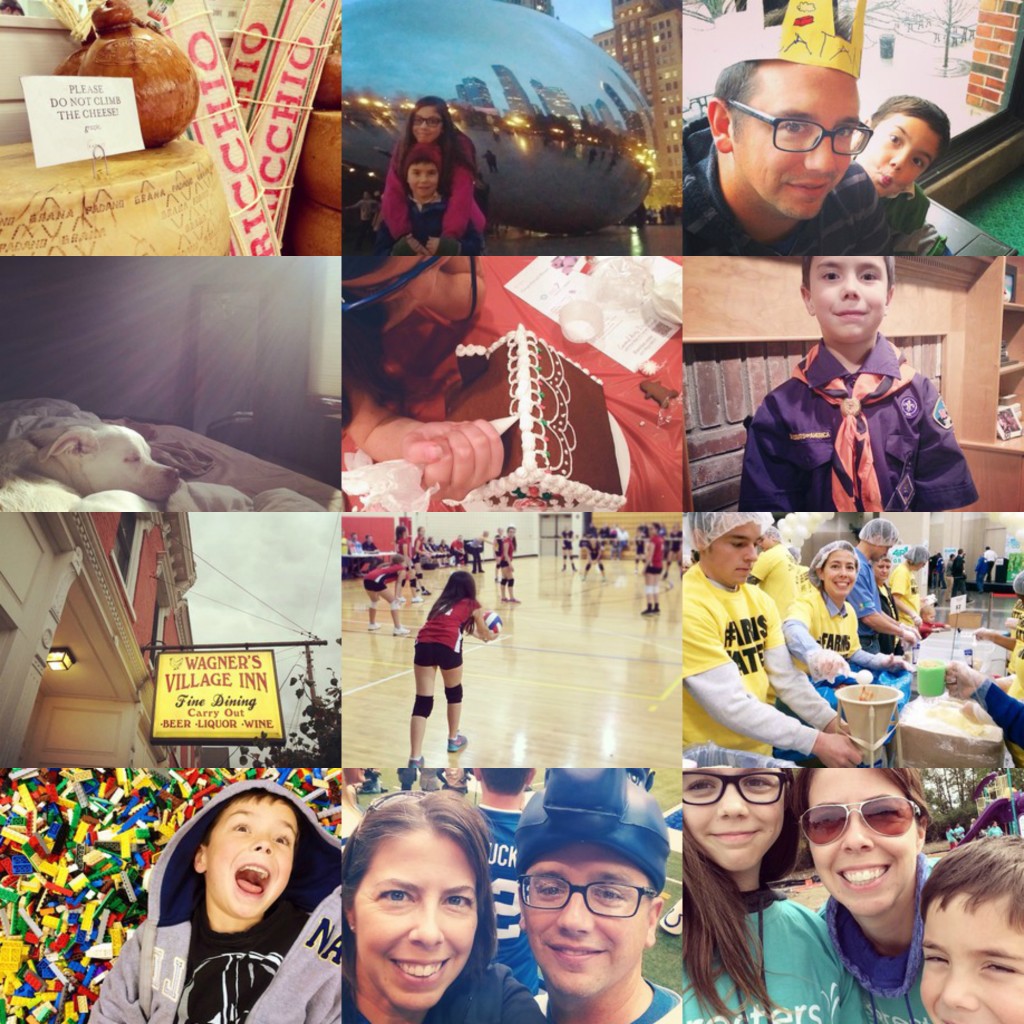 1. We took a little road trip up to Chicago in November for the Chicago Toy & Game Fair. When I realized Eataly was just a few blocks from our hotel, I knew a visit was in order. If it wasn’t totally disgusting and against every health code, I’d want my ashes scattered here. I’ve never had any inclination to climb cheese, until I saw this intriguing sign in the cheese department.

3. As part of the Toy & Game Fair, Mayfair Games held a very serious, very competitive Settlers of Catan tournament. The winner earned him or herself a trip to Gen Con to compete in the Catan World Championship. I promise I’m not making that up. Mike is the King of Catan in this house, as evidenced by his very official Catan crown the kids made him last year. He wore it to the tournament, right up until he lost in the semifinal round.

4. You know how you have the strictest rules and best advice about parenting … until you actually become a parent? The same holds true about being a pet owner. I swore up and down I would never let a dog sleep in bed with me. And then Gus gave me that look, and I said, “Okay. Just this once.” And then I realized happiness really is a warm puppy. The couch is still off limits. I swear (for now).

5. Elena and I have dreams of one day entering a gingerbread creation into Conner Prairie’s annual Gingerbread Village. We inched one step closer by taking a Gingerbread 101 class together at Conner Prairie. This is one of those traditions that I realize now I started waaaaaaay too early with my kids. Twelve is good. Twelve and in someone else’s space, where they clean up after you is even better.

6. Have I mentioned Eli is in Cub Scouts this year? He begged us to let him do it, mostly because he’d heard a rumor there would be BB guns. At this point it’s more like herding cats, but he did manage to earn his Bobcat badge.

7. I took my sister and my mom on a day trip to Cincinnati for some IKEA and Jungle Jim retail therapy. On the way home I introduced them to the best fried chicken in Indiana. If you find yourself near Oldenburg, Indiana, make sure you stop at Wagner’s and have some pan-fried deliciousness.

8.  Elena played volleyball this fall. It was 2% her wanting to try it, and 98% me wanting her to find a sport (any sport!) she might like. She ended up being the only one on her team who hadn’t played volleyball for multiple seasons. You’d think that would be a recipe for disaster, but she did great. She didn’t complain (much) and she improved drastically through the season. This particular photo is her serving to get her team into the championship game.

9. I had the opportunity to work alongside Future Farmers of America from around Indiana at the Colts annual Million Meals Marathon. The Colts partner with Thrive360 (formerly Kids Against Hunger of Central Indiana) to pack a million meals that will find their way to families facing hunger in Indiana. I packed for 2 hours, along with a couple of Colts cheerleaders, blogging pals, and the Colts Defensive End Cory Redding. It was such a cool experience, and I can’t wait to do it again with Mike and the kids.

10. What every parent’s floor looks like if they have a LEGO fan in the house … just kidding. It’s actually a sea of LEGO bricks for kids to play in at LEGO KidsFest. Super fun and a cool photo op, if you don’t think about how many germy little hands have been all over those bricks.

11. Mike and I have been able to go to two Colts games this year. This picture is from a home game against the Bengals. Incredible seats and lots of fun for us. Not so much for the Bengals fans we took with us. The weekend before last we went to the Colts game in Cleveland. The horse head did not make that trip with us. We’re not stupid.

12. My friend Sacha clued us into a KaBOOM! playground build that was happening in our community. I’m a big fan of KaBOOM! and their passion for making play accessible to kids in every kind of community, so it was a very special thing to be able to help. I hauled mulch for a bit and Elena helped paint signs for the new playground.