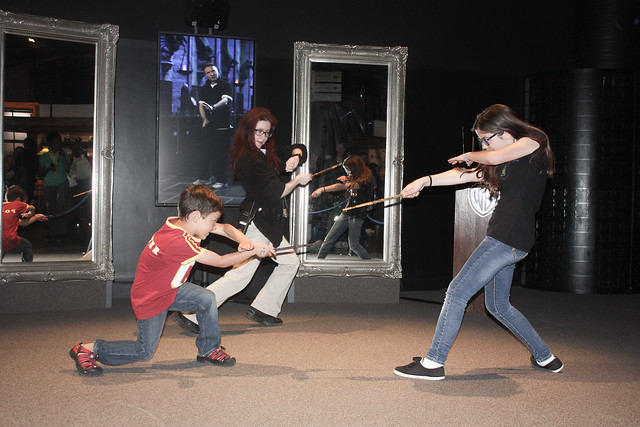 If you have two kids that are both smitten with all things Harry Potter, you can’t very well take them to London and not pay a visit to the place where all the movie magic began. And so one of the very first things we did after booking our flights to London was to buy tickets to The Making of Harry Potter Studio Tour at the Warner Bros. Studios in Leavesden (about 20 miles northwest of London). Needless to say, the kids were more excited about this aspect of the trip than any other, and will tell you that it was the best part of the entire vacation.

All eight of the Harry Potter movies were made at the Studios, which gives you an amazing and unique opportunity to not only walk where the actors walked, but to see the movie sets first hand. Beyond that, you are treated to an astounding collection of film props, costumes, artifacts, art and graphics, as well as intimate looks at special and creature effects. Like the movies and the books, the studio tour is done to perfection. 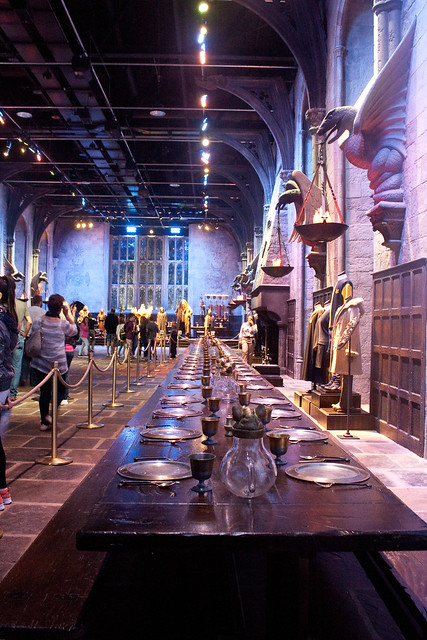 You begin the tour by watching a short movie about the making of the films. Once that is done, the movie screen disappears and you find yourself walking into the Great Hall. You get a short speech here, and then you’re set free to explore the rest of the Studios at your leisure. There is so much to see and do, with lots of interactive stations to keep younger fans happy. 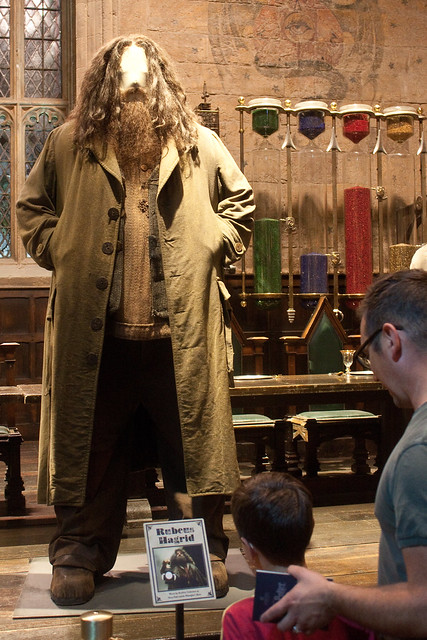 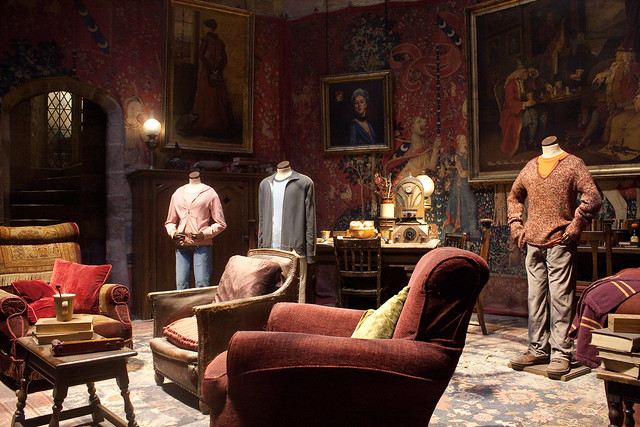 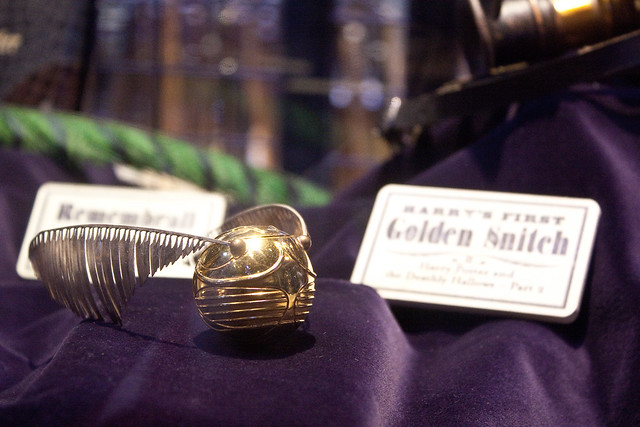 About halfway through the tour you can explore some of the bigger props and sets outdoors, including an exact replica of 4 Privet Drive, the Knight Bus, and the Weasley’s infamous flying car! You can also grab some butterbeer if you’re thirsty. 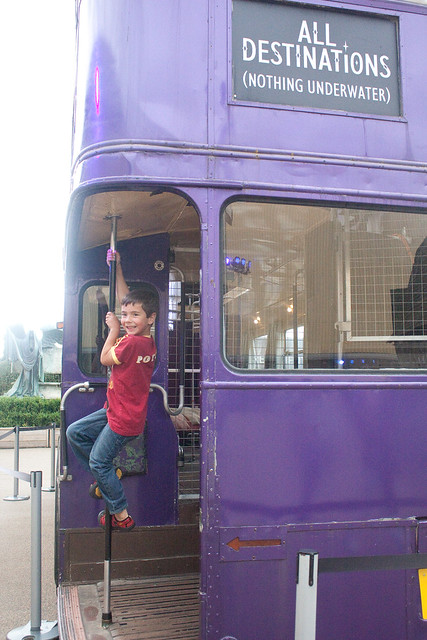 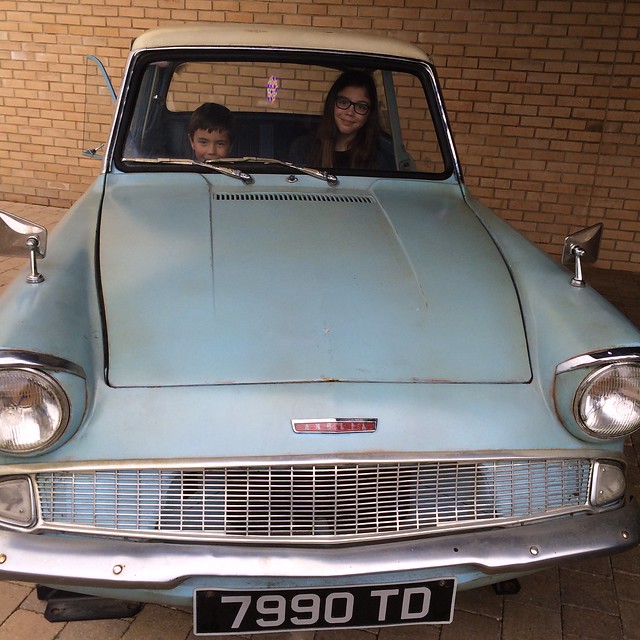 We all audibly gasped when we walked into this room, featuring the 1:24 scale model of Hogwarts that was used for filming many of the exterior shots in the movies. 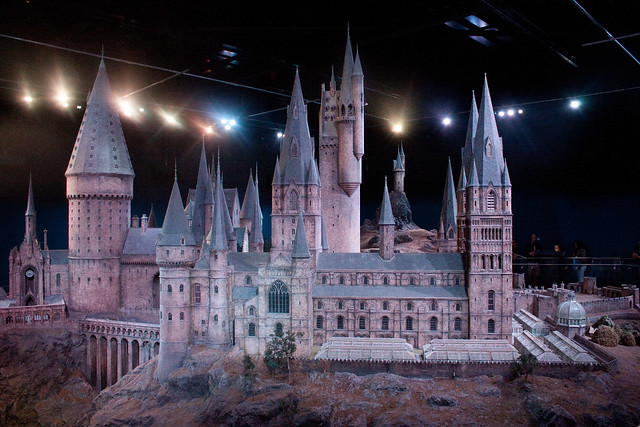 The end of the tour has you walking through the gift shop, of course, but it’s home to some of the coolest Harry Potter merchandise you’ll ever find. Elena found a Ravenclaw shirt that was making its first appearance in the shop that day. She loved the idea of having a Harry Potter shirt no one in the States had yet! Eli took home his very own wand. Elena got hers at Universal and he’d been envious of it ever since. (Funny story – Mike was in charge of bringing it back to the States, and it was the only thing he got pulled aside for at customs! They were very suspicious of it and thought it was a weapon. A weapon of the dark arts, perhaps! Thankfully they let him bring it home.) 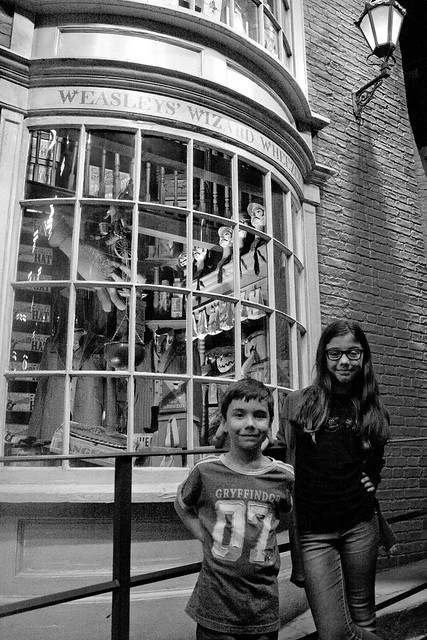 Part of me wished I had let Mike and the kids enjoy this together while I stayed in London and visited a site or two they weren’t particularly interested in (Hello, Westminster Abbey! I’m coming back for you!). I’m one of the few people on the planet who hasn’t read the books yet. You see, all these years Harry Potter has been something very special between Mike and the kids. He’s read the entire series aloud to Elena, and is working through them again with Eli. It’s kind of their thing, and I want to let them have it all to themselves for as long as possible. I have seen the movies, though, and so from that aspect the tour was very interesting. As much as I would’ve liked some extra time on my own in London, I can’t help but be grateful for being able to tag along on this Harry Potter adventure. Seeing the joy in their eyes, watching them take it all in together, and having the opportunity to capture those special moments as the fourth wheel was certainly a blessing. It truly is a special place for any Harry Potter fan, and if you can fit it in your itinerary you won’t regret it. 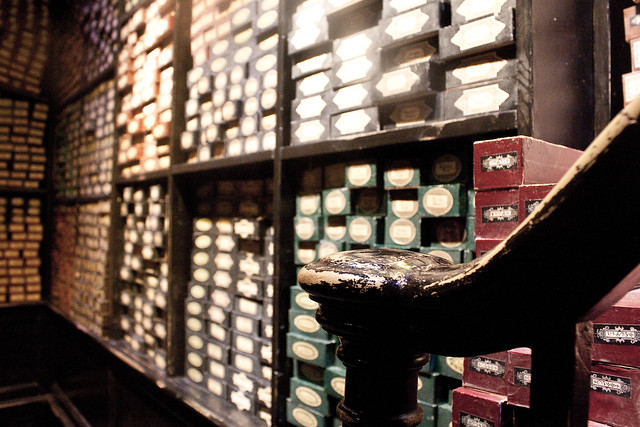 Tips for Your Visit

Getting There: Many, many thanks to Mackenzie for giving us the lowdown on how best to get to the Studios if using public transportation instead of driving there yourself. I’m simply repeating what she told us, which worked perfectly:

Make your way to Euston Station. There are lots of ticket kiosks inside, but pass those by and go to one of the ticketing agents instead. Ask for the fastest train to Watford Junction. You’ll end up purchasing a roundtrip ticket, and it was very reasonable, around £30 for the four of us. The train is comfortable and fast, about 20 minutes to Watford. Once you get to Watford Junction, you’ll leave the station and turn left. You’ll see some covered awnings, which is where the Harry Potter tour bus picks up and drops off. If you’re not sure, just ask. It seemed like 90% of our train was headed to there as well! You’ll buy another round trip ticket directly from the bus driver (£2 per person). The bus arrives about every 20 minutes and the ride takes about 15 minutes. You also have the option to book transportation through Golden Tours, which picks you up in London, but it will cost you at least double.
At the Studios: As soon as you arrive at the Studios, you’ll need to walk up the the ticketing windows outdoors and exchange your online reservation for actual tickets. There’s a nice little cafeteria inside, so I went to get the tickets and Mike and the kids went to have lunch. If you need to have a meal or a snack before or after your tour, this is actually a decent place to eat. There’s also a Starbucks, if you feel like paying the equivalent of $8 for a cup of coffee. You have a set time for your tour. You need to be there at least 20 minutes before, but I’d give yourself at least an hour. Busses and trains can run late, and all. You can also visit the gift shop while you wait, so there’s plenty to keep you occupied if you get there early. Plan on spending about 3 hours at the Studios before returning home the same way you came!
The day after our Harry Potter tour we bid goodbye to London and headed back to sunny (and – thankfully – much warmer) Spain. Next up: Barcelona!