As I shuffled into the bathroom last Monday morning, groggy and not quite awake yet, I gave Mike the most romantic thing I can offer at 6:20 am: a peck on the cheek along with a few minutes of semi-coherent conversation while he gets ready for work and I sit on the toilet. (TMI? Welcome to married life, folks.) Half the time I don’t know what comes out of my mouth, but on this particular morning I was grumbling about the 15 points I’d left on my bench by not starting Sammy Watkins and my critical need for a running back. Spitting out his toothpaste, Mike shook his head. “In seventeen years of marriage, I never imagined that we’d start our mornings off talking about fantasy football.” Mike has to laugh at this new twist in his ever-surprising marital life. Fantasy football comes up often in our conversations these days. While we never tell each other how we should set our lineups, we talk about our players a lot, and trade fantasy tidbits as we hear them.

In the spirt of don’t-knock-something-till-you-try-it, I gave fantasy football a go a couple of years ago, in a friendly, free league with other local female bloggers. It didn’t end so well. Turns out, much like my husband, I need some cold hard cash to grease the gears of my competitive engine. So this year, when talk surfaced at one of our cookouts in the cul-de-sac of a neighborhood league with money on the line, I was all in.

We got together over Labor Day weekend and held our draft. We made a little party out it, ordering pizzas and demolishing a vat of buffalo chicken dip. We decided to make it a keeper league, which means that when the next season rolls around, you can opt to keep up to three of the players on your team. You know what I love about this? It means that we intend for this to become a neighborhood tradition. I already get a little weepy thinking about the fact that, more than likely, we’ll attend the weddings of these kids I watch playing kickball in the court. Add to that the fact that I can keep Andrew Luck as my quarterback and continue whomping these kids year after year? Yeah, I get a little verklempt. 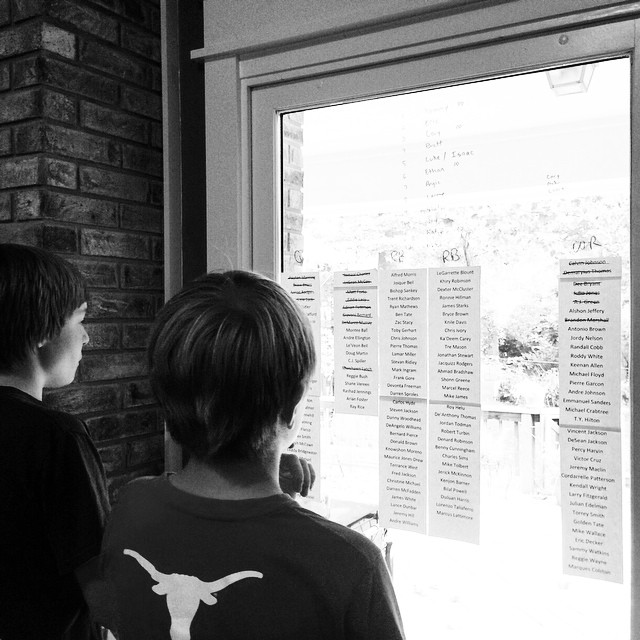 It’s nothing crazy. Each person had to put in $10 to play, giving the neighborhood kids a fair opportunity to participate. So far it’s been a blast. Of course, that helps when you start the season 3-0 (Let’s not talk about Weeks 4 and 5). It’s just one more thing to bind this fun little community of ours together, one more thing to chat about at the bus stop. It’s a good excuse to throw around some friendly trash talk while taking out the trash. We joke that it’s going to be such an enduring tradition that, God forbid, should anyone move? You’ll have to write the terms of the fantasy league into your contract agreement. I can see it now, on the MLS listing:

In all seriousness, though, having this friendly little wager over football with the neighbors is just another reason why I love the game so much. I used to give Mike a hard time over his fantasy football obsession. I couldn’t understand how you could root for other teams and other players. Oh, naive newbie football fan that I was. Now I get it. I root for my team the same as always, but I watch the games differently. I’ve always cared about the stories behind the players. Now I care about what  players from other teams are doing on the field as well.

And in a season of our relationship when it’s easy to forget how to be with each other without everything revolving around the kids, fantasy football season gives Mike and I a way to connect. Having a wife that loves football and cares about Matthew Berry’s flex rankings? That’s Mike’s own fantasy football fantasy right there.

Football is a crazy sport. You just never know what’s going to happen week-to-week. And as a young bride, I certainly never would’ve predicted fantasy football would be something that would bring me closer to my husband*, let alone my neighbors. But you know the old saying, the friends and family that gamble on sports together stays together! And like that sleeper player that lights up your scoreboard, I’ll always be grateful for it.

*Except for Week 9, when we play each other. And I crush him like a little bug.