As you might remember, we painted and decorated Elena’s room shortly after we moved in. Eli’s room, on the other hand … well, it stayed as is for over a year. In typical Eli fashion, it did not bother him one bit that it used to be a little girl’s nursery. Nope, laid-back Eli was fine with it.

Well, it was finally time to give the kid a room of his own! He wavered between a few different themes, but in the end he settled on one of his biggest loves in life: LEGO. 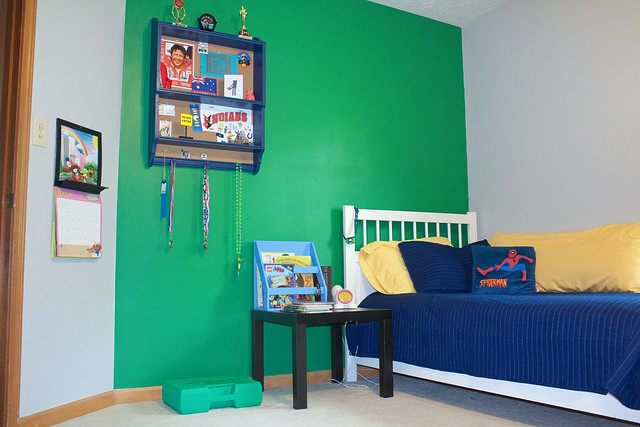 He initially said he wanted the entire room green. (Note to all parents: do not give a kid free-range in the paint chip department unless you’re really okay with the most garish, hideous color they make. Because that is the one color your kid will pick.) We compromised and painted one wall green and the rest of the walls a light grey. The grey is a nice backdrop for the primary colors of LEGO, and should he change his mind about the theme in the near future, it will be much easier to repaint one wall instead of all four. 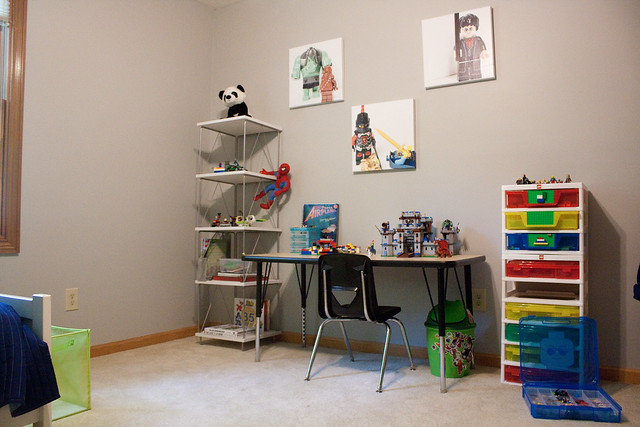 He had some dark wood bookshelves that were leftovers from our old home office, but they were too small for his growing collection of boy stuff and didn’t look great with the rest of his furniture. I chose these Wendel bookshelves from The Container Store. This particular collection has been discontinued, but they’ve revamped the collection since. The new versions are very similar. 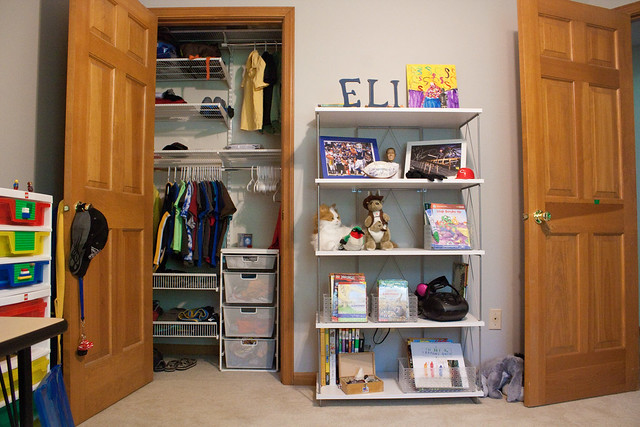 We’d already had his closet done when we moved in. I cannot recommend Elfa enough, especially for kids’ closets. All of the shelves in Eli’s room can be moved up or down quite easily, so the closet will essentially grow with him. I also have an Elfa drawer unit in there to hold socks, underwear, bathing suits, and pajamas. I have several drawer units in my house (Elena’s closet, the basement, and in the pantry) and I’m continually amazed at the functionality of them. Some of them have served different purposes in different rooms, depending on the need. They are one of my best household investments ever. 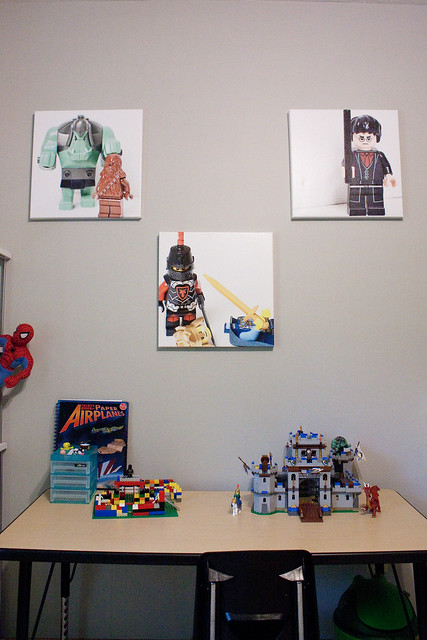 The best part of his room, in Eli’s opinion, is the custom collection of LEGO prints. I had Eli set up several different scenes with his LEGO minifigs. He plays with his minifigs more than any single thing he owns, so they’re very special to him. After he set up the scenes, I photographed them up close. I then uploaded his 3 favorites to Fabness and ordered them as square canvases. Fabness is my favorite place to buy canvases from. They almost always have a great deal going, and the quality is amazing. 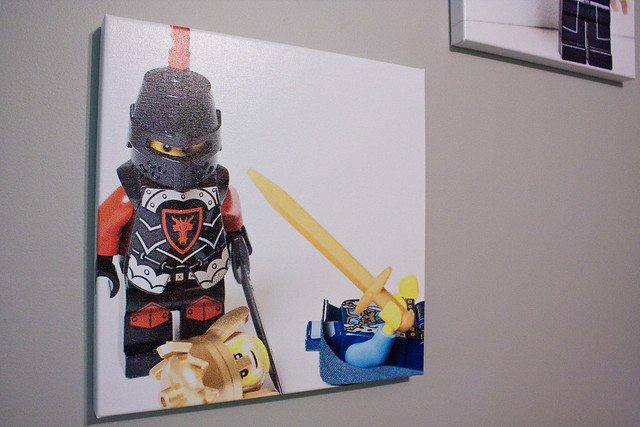 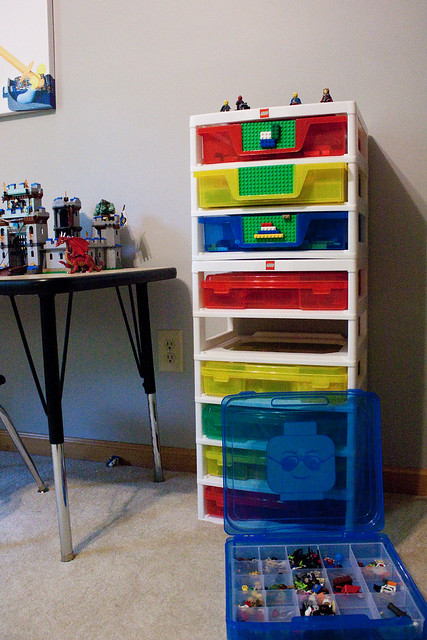 We’ve tweaked the way Eli stores his LEGOs just a bit. For one, we moved them from the basement up to his bedroom. He plays with them so much more once we relocated them. For years we organized them in IKEA bins. While we still have them organized by type of brick (as opposed to color), we moved them into these LEGO bins

. They’re perfect now that he’s a little older. You can either throw them in drawers (which works great for bigger bricks or Ninjago/Chima pieces), or use divided inserts

within the drawers. I’ve always stressed that the way you organize LEGOs totally depends on how your kid likes to build. Eli loves to build from plans, so having bricks organized by type helps him when he’s looking for a certain brick. I often get asked if he’s able to maintain this system. When he was younger, he needed help. Now, while he might mix similar bricks together, he’s very good at keeping the different bricks separated. 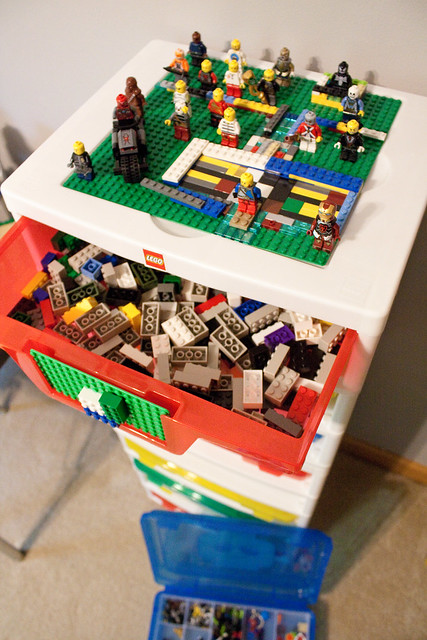 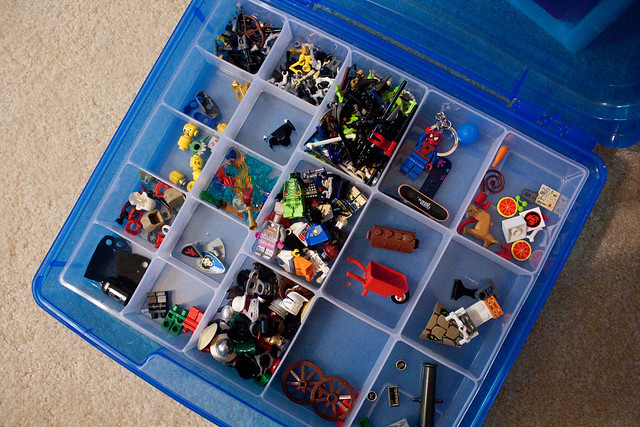 We still need to figure out a window treatment, and we have a few more posters to hang up, but I’m really thrilled with the way his room turned out. Most importantly, though, is that Eli loves his LEGO -themed room, too!