If the first part of our trip was all about planes, the next leg was all automobile. Don’t worry, we’ll have trains covered by the end!

As much fun as it was to visit London and Barcelona, we were ready to be done with flying. I wouldn’t have done the trip any other way, but still … 6 flights and 3 countries in 11 days is pushing it.

We rented a car for a week so that we could see more of Andalucia (southern Spain) on our own timetable. I’m so glad that we did. The drives between the towns we visited were spectacular. Mountains, hillsides covered in olive trees, fields of endless sunflowers, tiny white towns nestled in the valleys … it was crazy beautiful. 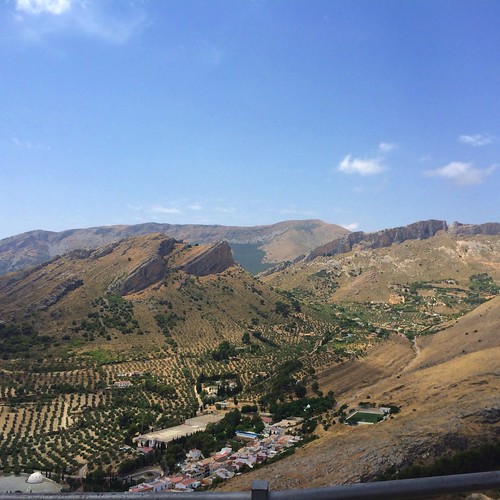 I have to give Mike major props here. He drove like he’d done this a zillion times. We got turned around so many times, and trying to drive in some of these towns, on streets barely big enough for a car, let alone other cars and people, is strictly for crazy people. But he did it time and time again, leaving his sanity and the rental car intact. The car came equipped with the sensors that beep when you’re getting too close to an object. There was one particular street in Granada that set off a symphony of sensor beeps in our poor little VW Polo. The kids thought that was the funniest thing ever. 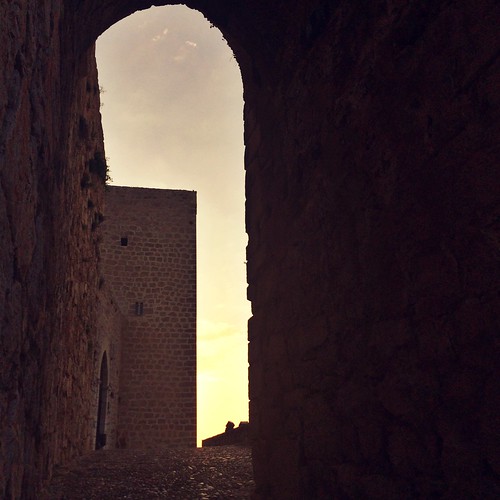 On Friday we drove from Sevilla to Jaen. Thanks to the recommendation of Mackenzie, we booked a room in the Parador of Jaen. Paradors are government-run hotels that can be found throughout Spain. They are often located in historic buildings. This particular parador was part of a castle. It was a bit of a splurge, but it’s probably the most luxurious place we’ve ever stayed in as a family. It was at the tip top of a mountain overlooking Jaen. Our room was huge, and had a big terrace that overlooked the valley. We wandered around a bit in Jaen, but we mostly enjoyed walking around the Parador. In the morning they brought a spread to our room fit for a king: coffee, drinking chocolate, pastries, fresh orange juice, toast, cheese and jamon. I could’ve spent a week in that room! 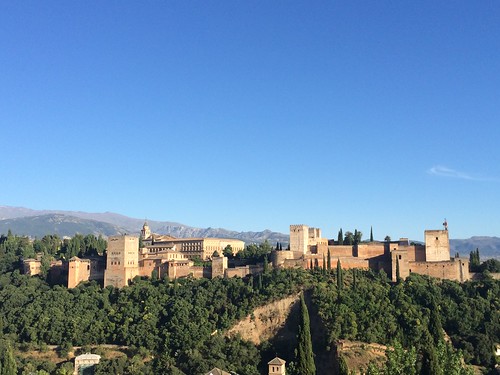 Saturday morning we made the short drive to Granada. Granada is home to the Alhambra, a Moorish palace known around the world for its beauty. We stayed in a guest house just steps away from the entrance to the Alhambra, and within close walking distance to the medieval Moorish streets of  Albayzín. While not nearly as fancy as our previous digs, it was awesome to be steps away from everything. The Alhambra is a jaw-droppingly amazing as I remember. I can’t wait to show you some of my “real” photos. In the evening we walked up to a famous lookout point with great views of the city and the Alhambra. We ended with a visit to a local ice cream shop (Los Italianos)  that’s rumored to be a favorite of Michelle Obama’s. If that’s true, lady knows her ice cream. I had their specialty, a cassata. It’s basically an ice cream cake made of ice cream studded with dried fruits and chocolate. Terrible, I tell you. Terrible. 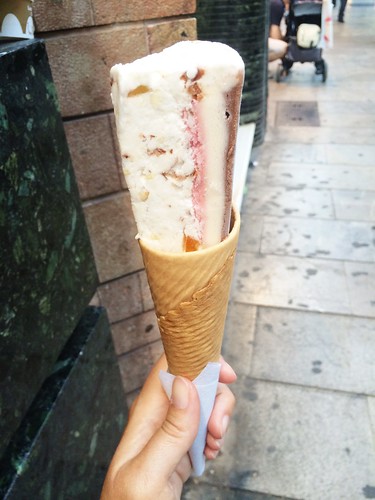 Sunday we drove to Ronda. Ronda is known for its spectacular views. The city is perched on the edge of a giant gorge. There are two bridges spanning the gorge … the “New” Bridge (finished in 1793) and the “Old” Bridge (built in 1616). It’s also home to one of Spain’s oldest bullrings. We really enjoyed Ronda. It’s small enough to wander about without feeling overwhelmed that you should be doing more sightseeing. There are tons of lovely cafes and beautiful views. Our hotel was pretty sweet, too. It was very funky – lots of upcycled art. It had a tiny rooftop pool that the kids loved, as well as an aviary and a fish pond. Our favorite part was the 24 hour open bar. Our room was 2 stories! The kids couldn’t believe it, and wanted to stay for at least another week. 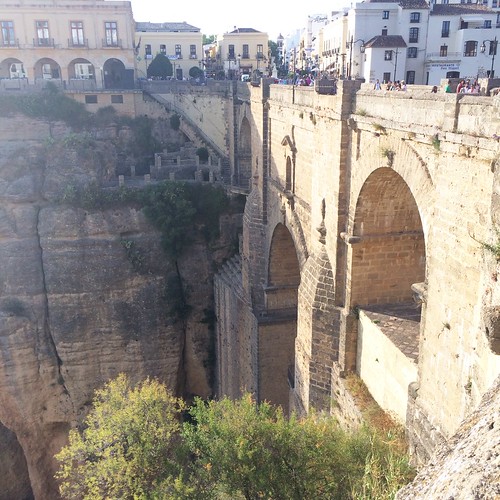 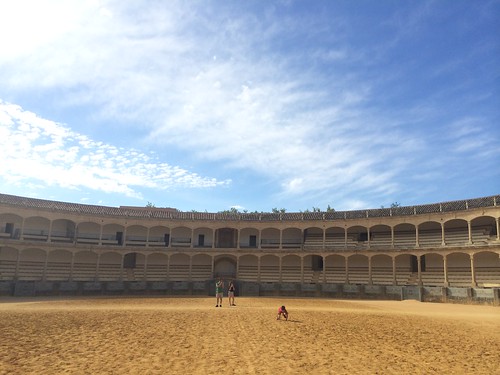 On Monday we drove to Morón de la Frontera, which is the town my mom is from. We were able to see my aunt, uncle, and many of my cousins. Everyone is so, so kind and accommodating. Elena broke out of her shell a bit and went off with my cousin’s daughter and her friends for a few hours. I was finally able to get my hands on some caracoles. These snails are a specialty in southern Spain and only available for a couple of months in the early summer. I’ve been craving them since I last had them over 20 years ago! 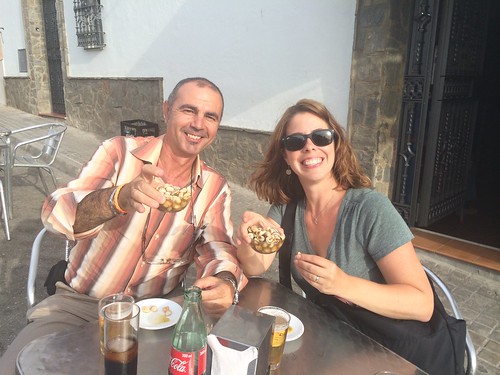 That evening we drove to Sanlucar, which is a beach town where my Tita Hortensia has a home. This wasn’t originally in the plans, but Mike really wanted to see it. It was raining buckets in the morning, which gave us a few hours for a much-needed chill session. The kids and I will head back here in a few days – it’s the perfect place to just relax and live like a local. 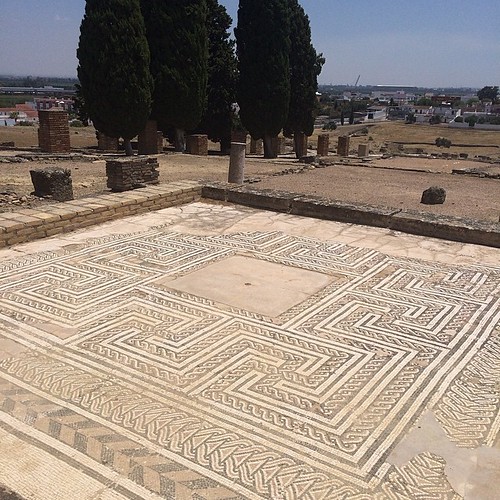 Wednesday we headed back to Sevilla to return the rental car and spend some time with my cousins and uncle that had visited us in April. We’ve mostly been walking around Sevilla and enjoying family. My cousin drove us to Italica, a spot outside of Sevilla that has some really well preserved Roman ruins. Yesterday was Mike’s last day with us. On Thursday evening we put him on the high-speed train back to Madrid. This morning he returns to the States. 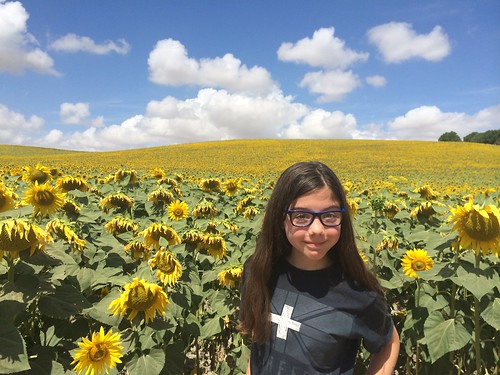 The kids and I have just under 2 weeks left. We’re spending a few more days here in Sevilla before heading back to Sanlucar and the beach. After that we return to Madrid to pack up the rest of our things and come home. While we’ve seen so many amazing things, and I’m sad to see Mike go, we’re looking forward to some slow days of exploring and relaxing. Tomorrow we’ll celebrate Elena’s 12th birthday Spanish style – with a party and some paella!

Until next week – ¡Hasta luego!