Hola! I can hardly believe it, but I’m updating you from sunny Spain! I’ve spent so long dreaming, planning, and preparing for this trip, and yet I have to pinch myself that we’re really here. I’m going to try and update you on our travels and share a few of our favorite pictures every week. So far, so good! 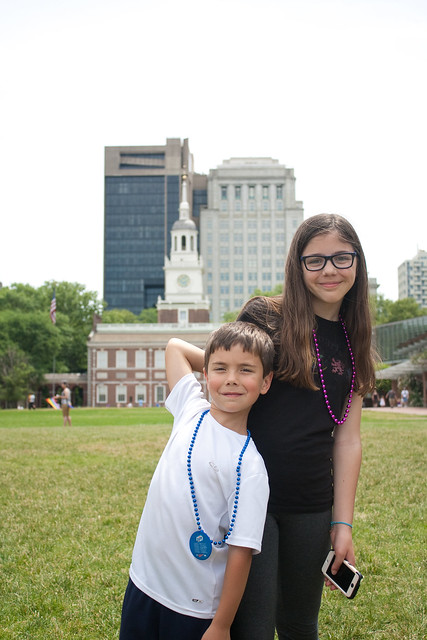 We began our trip in Philadelphia. For whatever reason, flying out of Philly was about half the price of flying out of Indy, so we booked our tickets and then got ourselves a connecting flight to Philly. We didn’t want to make the first day of travel too crazy, so we flew to Philly the day before our flight left for Madrid. It just so happened to be Mike’s birthday. We’d never been to Philly, so we took in the highlights: the Liberty Bell, Independence Hall, and Philly Cheesesteaks. We walked right into the middle of an enormous (and very lively) gay pride parade. Just like St. Louis, this was the highlight of the entire day in Philly. 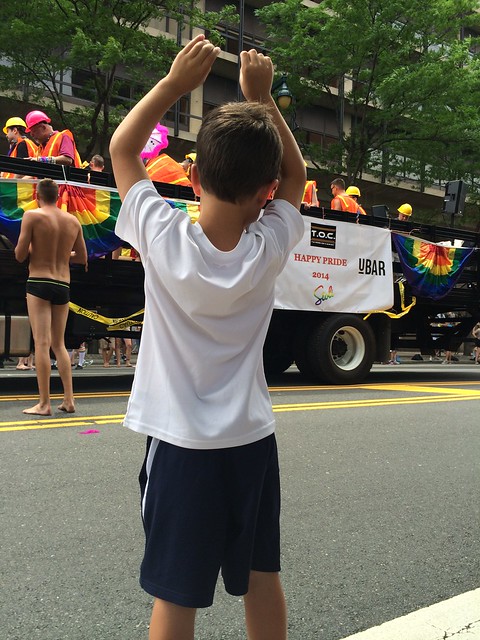 After a lazy morning, we were off to Madrid. We had a short flight to DC, and then an evening transatlantic flight. Despite our best efforts and all the melatonin we could safely ingest, none of us slept much. Still, it seemed to go quickly and the kids were enthralled with the in-seat movies. I was ready to call it a complete success, until Eli yacked on landing. Thankfully I had a ziploc bag ready to go. Score one for prepared mama.

We landed at 7:30 am and had the entire day in front of us. After breakfast with my aunt and uncle, my uncle showed us how to master the Metro. The public transportation system in Madrid is amazing, and so easy to use. Other than a day trip to Toledo by car, it’s all we use. The nearest Metro stop is a 5 minute walk from my uncle’s house. 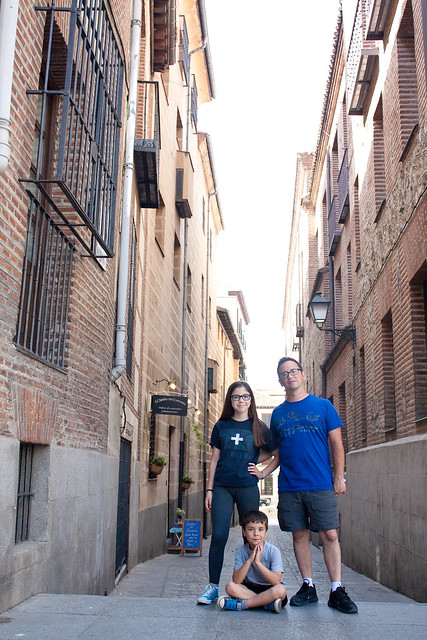 In the morning we took a walk around the heart of Madrid, starting off in Puerta del Sol. We walked by the Royal Palace and ended up in Plaza Mayor for lunch. The highlight there was a guy dressed up in tinsel, wearing a goat head. He’d shake his head and “clack” his teeth as you walked by. Again, the main thing the kids remember so far! We wandered through the Mercado (market) del San Miguel. I so wish we hadn’t already eaten – everything looked amazing! Instead we settled for ice cream. In fact, we seem to settle on some kind of ice cream treat every day. Not a bad way to live. 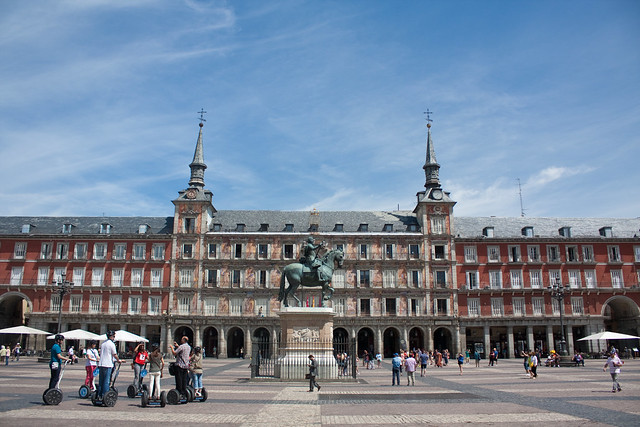 I wanted so badly to stay up for the whole day, but we couldn’t make it. I could barely keep my eyes open on the Metro. Naps were in order for everyone. We went back out later in the day and caught a Pixar exhibit at a local museum, CaixaForum. Such a treat for us and the kids!

After sleeping for close to 11 hours that evening, we were ready to go the next day. We met my cousin, Tony, at his apartment and proceeded to rent bikes. He took us on a bike tour of Madrid by the river. It’s so cool to see so much green space in a cosmopolitan city. Afterwards we had an amazing lunch at a small sidewalk cafe. We followed lunch up with shopping along Gran Via. Elena is in love with the clothing here. I keep having to remind her we only have so much space in our suitcases! 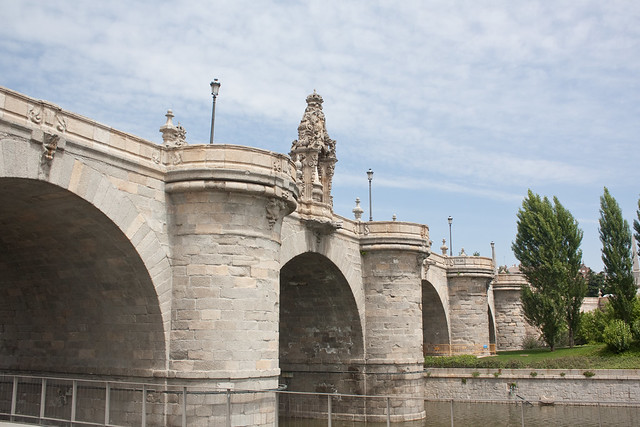 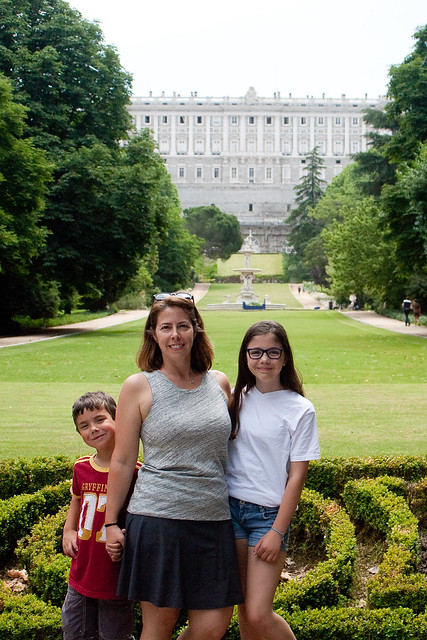 Today we drove to Toledo, about an hour south of Madrid. It was amazing and breathtaking. We explained to the kids that the things we saw in Philly were old for the United States, but here, old could mean 12th century! We tried the traditional sweet, mazapán, and a huge chocolate croissant. We visited the Santa Cruz museum and marveled at the courtyard. 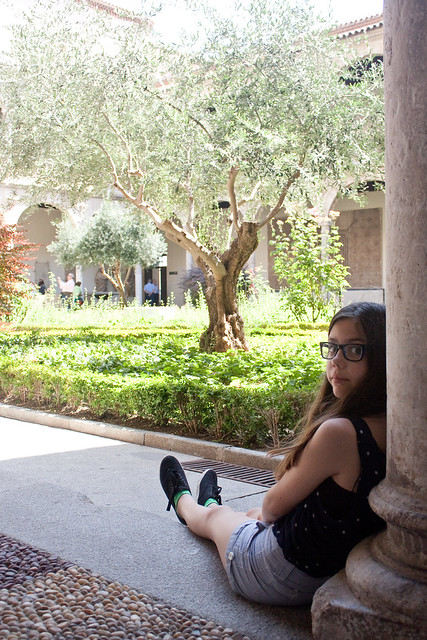 Eli’s favorite was the Army Museum. In fact, the entire city captured his attention. Toledo is known for it swords and knives. Eli was muy disappointed when he realized that we couldn’t bring a “real live sword” home with us. That didn’t stop him from wanting to visit every single sword shop, though.

Mike and I were blown away by the Cathedral, though. It’s considered one of the best in Europe, and I understand why. It took 250 years to build, and it was completed in 1495! Every square inch was jaw-droppingly gorgeous. Unfortunately the wifi isn’t cooperating at the moment and I can’t upload the pictures. I’ll add them as soon as I can!

We have one more day in Madrid, and then we’re off to London for a few days. Wish us luck as we attempt to travel on the European budget airline, Ryanair. It seems pretty much all of our suitcases are too big, so I have some creative packing to do tomorrow!

In the meantime, you can see all of my photos on flickr, as well as keep up with a few snapshots on Instagram. Thanks for following along!