Today the temperatures will rise into the mid-forties. The sun is shining, the birds are coming back around, and it’s easy to hope that spring really is just around the corner. And yet, there’s a mountain of snow outside my window that will probably be there until March. It ceased being pretty long ago, but it will lose the rest of its appeal when it lingers as a jagged, dirt-encrusted remnant of the millions of beautiful snowflakes it once was.

It started out small. Minute flakes fell from the sky and dusted the cold ground. They kept falling, and accumulating until there was a drift. The snow plow came and shoveled some more on. Before the small pile had a chance to melt, another storm came, and then another. The snow plow kept dumping what the street couldn’t handle onto the pile. And that’s how what was once a handful of flakes turned into a mountain of snow that blocks the view outside my window.

I can empathize with that pile of snow. The school year began like a clean slate – so much time! For the first time since becoming a parent, I’d have both children in school, all day! Like the snow flakes, I started accumulating projects, responsibilities, and commitments. The calendar started to fill with appointment times, and my to-do list slowly grew. But it was so pretty – the busyness cloaked in productivity! Then the commitments piled up, and the snow plow that is life shoveled on some more. Suddenly the calendar with every square inch filled in isn’t pretty anymore. It’s blocking my view of what’s important. It’s pushing aside the remarkable moments to fill the space with moments that are harried, stressful and draining.

It’s blocking my view of these beautiful people and stealing time that is too precious. 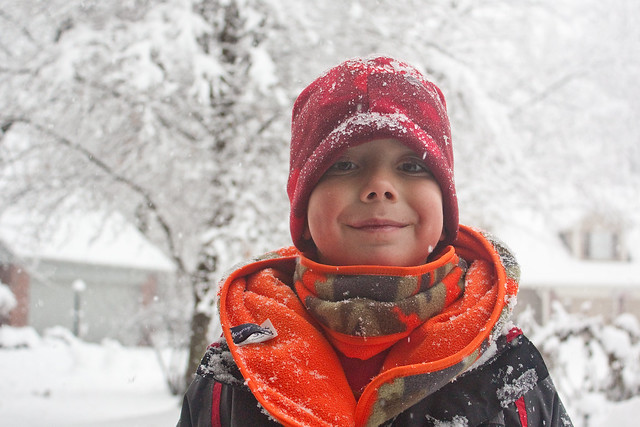 Do you ever feel this way? That one moment you were fine, and had it all under control, and the next moment you wish the governor of your life would step in and declare a state of emergency?

The good news is, that like the snow pile, this feeling isn’t permanent. I have the power to change things and make it go away. I can take a nap. I can say no. I can let go of things that stand in the way of balance. It’s hard, though. In a world filled with choices that all seem good, it’s easy to get overwhelmed. What if I let the wrong thing go? What if I turn away from the path that leads to the best opportunity? What if I drop the ball that will shatter instead of bounce?

That’s where faith comes in. I have faith that something bigger than myself will guide me in decisions that are smaller than my human, over-thinking head makes them. And I have faith that the sun will come up, day after day, and melt that pile of snow. It will be ugly for a bit, as it tries to sort itself out, but it will make way for something beautiful.