We're back from the beach, but it may take us awhile to recover.  Or at least it may take meawhile.  While I was definitely lucky to have helpers, I certainly missed having Mike around.  I was hoping to post from the beach, but we had horrible cell/internet service.  And frankly, by the end of the day I was too pooped to do much of anything.  Instead of one monstrous post, I thought I'd spread it out some and give the highlights and a few pictures from each day.  So if that sounds really tedious and boring, you may want to ignore the blog for a few days.

We started the trip by heading down to Nashville with my mom.  It was pretty uneventful, except for a huge fit Elena through right before we stopped for dinner in Louisville.  I didn't hear a peep from her throughout Indiana (she was listening to Harry Potter and the Prisoner of Azcaban on CD . . . or as she likes to say, "Harry Potter and the Prisoner of  Ass-cabin").  Next thing I know she's wailing and flailing and crying, "Why does there have to be a Kentucky???"  Poor thing, a lot of people wonder that.  We spent Saturday visiting friends.  First stop was what's left of the playgroup pals.  Lisa A. hosted us and Elena had a blast exploring their big backyard.  Tina and Lisa had never met Eli, so that was fun, too.  Next we visited the Martin family briefly.  I didn't see Elena the whole time, as she was totally enthralled with their tree house.  And I was enthralled with their tomato plants and good company.  My sister, niece and her 2 kids rolled into Nashville that evening.  Bright and early the next morning we were off.  For being in the car 8 hours, the kids (especially the babies) did great.  It was too late to do much of anything, so we ordered pizza and called it a day.

We stayed in Seacrest Beach, part of scenic 30-A in the Beaches of South Walton.  We stayed in a development called Magnolia by the Sea.  I loved the house, especially the fact that it was right next door to the community pool. 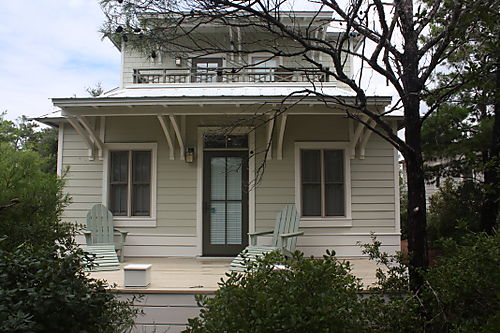 Eli and Olivia decided that 5 a.m. is a perfectly acceptable time to wake up on vacation, so by 8 a.m. we were already at the beach.  Let me just say that a stroller, a 24 lb baby, plus all the crap you have to lug back and forth to the beach is no fun to haul up and down what felt like 100 stairs.  Note to self:  next time make sure beach access doesn't involve a massive amount of stairs.  That being said, the beach was beautiful and my kids both loved it.  Here's Eli doing his Jungle Book crawl: 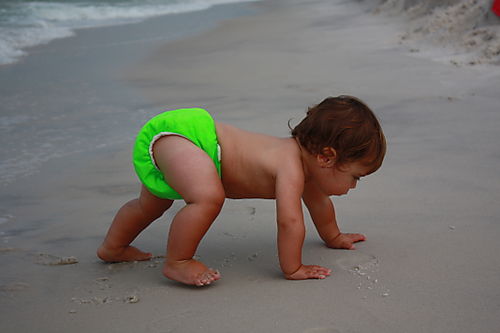 Elena took right to the water.  My apologies to Danielle for putting you out there for all to see . . . but you looked the best in a bathing suit out of all of us, so there you are! 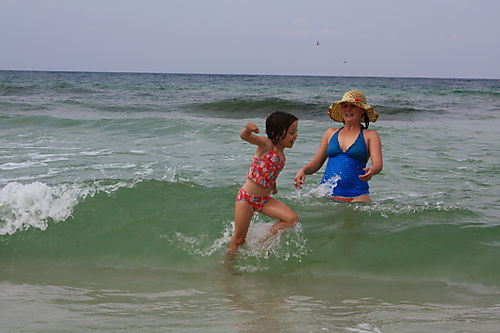 We spent the rest of the day between the beach and the pool.  I took Elena to the beach by myself in the afternoon and we had a grand time wave jumping.  It was a good thing, too, as it would be our last time in the water for a while . . .