These are just a few of the concerts my mom endured on my behalf.  If they were in Tiger Beat or BOP magazine, I had to see them, and if they found their way to Indianapolis my mom usually found a way for me to go.  Have you met my mother?  Because if you have, then you can fully appreciate how much she must’ve loved me.  These concerts were NOT her thing.  I don’t recall her ever forking out her own cash to see someone she liked, and I’m pretty sure NKOTB wasn’t on her concert bucket list.  Maybe Neil Diamond, but definitely not Donnie Wahlberg.

So how amusing it must be to her to find myself in almost the same shoes 25 years later.

We’ve been taking Elena to concerts for a couple of years now.  She’s seen Miranda Cosgrove, Big Time Rush, and Ed Sheeran.  But there was one concert that was the end-all-be-all, the tween Holy Grail:  One Direction. Tickets for their US tour went on sale a year ago in April.  Did you catch that?  14 MONTHS BEFORE THEY EVER SET FOOT ON STAGE.  And they sold out … fast.  I started checking on tickets for her a couple of months ago and nearly had a heart attack.  Nosebleed seats for the fine price of $300.  I saw The Boss for $100.  Sorry, honey, I’m not paying more than twice that to see a boy band, unless all 4 Beatles rise up and perform again.

A few weeks ago a mom of one of Elena’s friends found out it was possible to see One Direction in Chicago for less than $60 a ticket.  What followed were frenzied plans for an epic surprise.  The word on the street was that one of the girls was having a skating/slumber party.  In reality, 5 girls and 4 moms were going to One Direction.

We posed them as if we were going to take a group photo before skating and then broke the sad news that we would not, in fact, be skating.   I have video … oh yes, I do.  I love that the girls, with the exception of Elena, all react like they’re in the tween edition of Punk’d.

The concert?  Okay, I’ll admit it.  The lads are cute.  I’ve been known to belt out “What Makes You Beautiful” in the car by myself at times.  Was it the best show ever?  Of course not.  Was it the best time ever, watching the girls see the best show ever?  Absolutely.  At one point, Elena and two of her friends where arm in arm … crying.  They were crying boy band tears of joy. Behold the screams as the boys set foot on stage:

I might have needed ear plugs for the screaming and Xanax for the epic mess the parking lot was before and after the show.  What I didn’t need is any further convincing of why we moms do this for our girls.  We do it because we love them so much. And because we never really outgrow a good boy band. 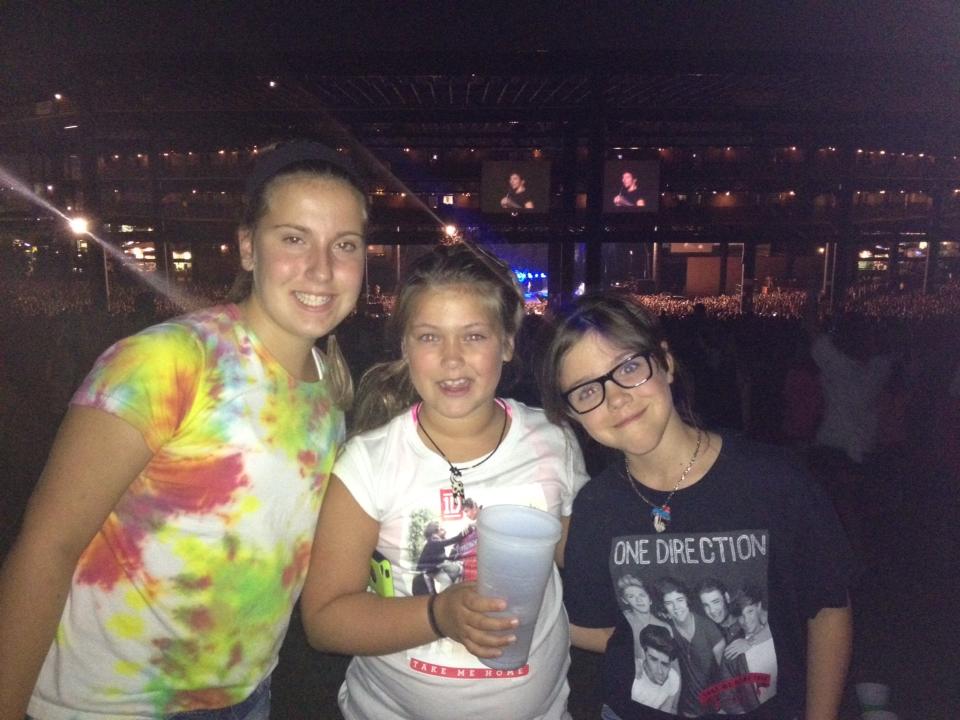