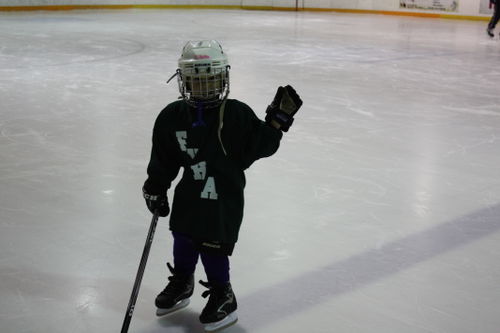 Because I can assure you I was not wearing lipstick to the rink the other day.  Thanks to a sweet deal we scored at the Montessori School's silent auction, Elena is now enrolled in a session of youth hockey.  She had her first practice last Saturday, which was all Mike.  He was so excited to get her geared up and watch her practice.

Day 2 of practice (last Tuesday) just happened to coincide with Mike's business trip.  So that's how I found myself on Monday evening getting a tutorial on how to dress a kid for hockey.  Unlike the whole overplayed lipstick -and-pit-bull-Palin thing, this was no joke.  There was a demonstration.  There was a list made with everything in the order it was to be put on.  There were adamant instructions to get to the rink with at least 30 minutes to spare before practice started.  There was much whining on my part.

I managed to get her to the rink, dressed, and on the ice with no major mishaps and no new curse words in Elena's vocabulary.  I couldn't have done it without Mike's fabulous preparation and my fabulous parents, who volunteered to keep Eli while I fumbled my way through this first practice alone.  So I'm now officially a hockey mom.  The hockey kid doesn't look so bad herself.  Next time I might even find a few seconds to put on some gloss.