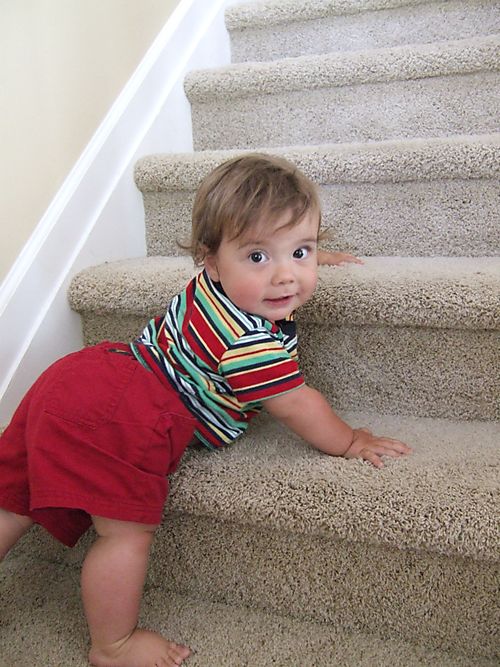 After all this gushing about a certain 6-year-old, I couldn’t fail to mention that Eli happened to hit the 11-month mark shortly after Elena’s birthday.  Yes, we are rapidly approaching the end of his first year.  I keep thinking about how huge and miserable I was at this point last year.  Now I’m just carrying around that extra weight on my hip, instead of front and center.  At least my clothes are cuter these days.  It looks like I might not have to do all that carrying for too much longer.  In the last month Eli has finally decided that being mobile might have some benefits.  This would include attempting to climb stairs, since freaking out mommy is much more entertaining than sitting contentedly on his tiny heiny.  He’s still not crawling in the traditional sense, but he can do a mean army crawl, which is oddly similar to swiffering my floors. I haven’t recorded an official first word yet, but we get glimpses of things that could be actual words.  He likes to tease us by saying something, getting us all in a frenzy, and then not repeating the word ever again.  Some possibilities include Elena, choo-choo, grandpa and book.  I think he’s holding out until September, when he can say, “Peyton Manning.”  Then he’ll do the sign for “I Love You” and my job here will be done.