Forgive me for walking around in a daze today. We are on our second snow day of the school year, which doesn’t seem like much. However, if you consider that the kids have only attended one full day of school since December 19th, perhaps you can understand. I don’t even know what day is what anymore.

The other, more joyous, reason for my space cadet-ishness is that I’m still trying to process the Colts divisional playoff game victory. In case you’re not living in central Indiana or as football-obsessed as I am, let me recap. Last night was the second playoff game for the Colts. We faced Peyton Manning and the Broncos in Denver. Now, we’ve beaten Peyton and the Broncos in previous seasons, but we opened up this season by letting the Broncos trample all over us. Not fun.

I’d like to tell you that I’m the kind of fan that believes in their team no matter what, but I’m not quite there yet, not with this young team. Yes, Andrew Luck is amazing, but he’s only in his 3rd season. He has a lot of growing to do. My beloved Reggie Wayne is struggling. The defense and the offensive line have had some great games … and more than a few downright terrible ones, too. While Peyton and the Broncos have struggled at times this season, as well, it’s still Peyton Manning. In case you don’t recall, he was my quarterback for awhile. I’ve seen him perform miracles and resuscitate dying games before. So there I was yesterday … hopeful, not afraid to pull out all the punches in case it made a karmic difference, but also fully resigned to the reality that it might be the last Sunday to wear my Luck jersey. 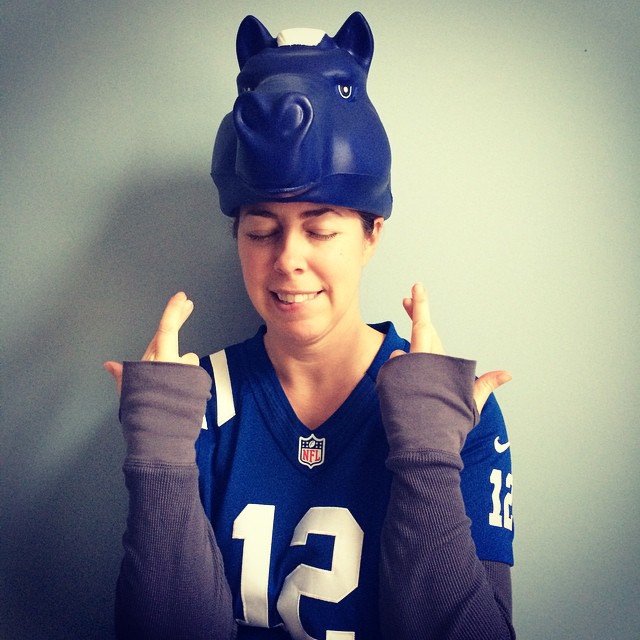 It’s only weird if it doesn’t work, right?

SHAME ON ME. My Colts came to win. It was a fun game to watch, made even sweeter by the fact that we’d invited some Broncos fans over to watch it with us. I tweeted last night that I have a different feeling in my gut about this team after this game … the same feeling I had during the post-season in 2007. You know, the season they won the Super Bowl? And what do I scientifically base this good feeling on? 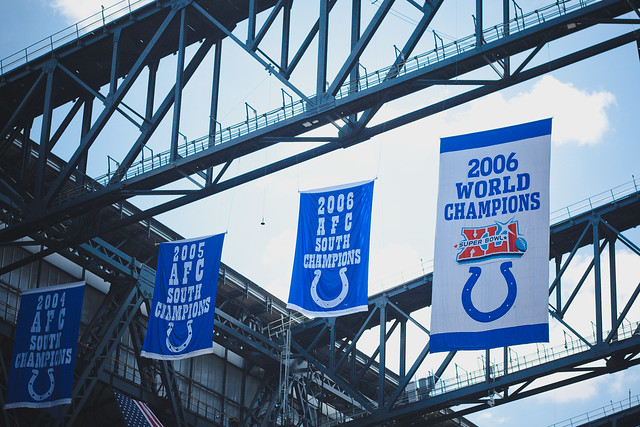 , a delightful birthday gift hand-picked by Eli. We are 2-0 since I’ve started caffeinating myself from the Horseshoe.

4. Just like 2007, the road to the Super Bowl goes through Tom Brady and the Patriots. We did it then and we can do it now. This little statistical nugget helps, too: the Luck-led Colts are 12-0 when facing a team for the second time in a season. And guess who we lost to 42-20 earlier this season? Those no-good, Ugg-wearing, Beli-cheating Pats.

5. Finally, my gut says so. Or it’s the leftover tacos talking. Either way, I think this team can do it. I really do.

I had an interesting conversation via text with my friend Lisa, who wanted to know if it was hard rooting against Peyton yesterday, if I felt any torn allegiances. That’s when I realized how much I really love this Colts team – because I wasn’t the tiniest bit torn, nor was there even the smallest piece of me that was rooting for Peyton to win. It is cut and dry. Black and white. (Or blue and white?) My loyalties go like this:

A little over a month ago, Peter King asked me how I felt about Andrew Luck. How do my feelings for him compare to my affection for Peyton? I gave him about as detailed an answer as you can give in 140 characters or less. I told him it was tough, that I like Andrew a lot. I’m glad he’s our quarterback, if it can’t be Manning (and praise the football Gods we didn’t draft RGIII instead). I like the direction this team is heading. But the affection isn’t there. Peyton is special for reasons that I’m not sure will ever be replicated (for me). 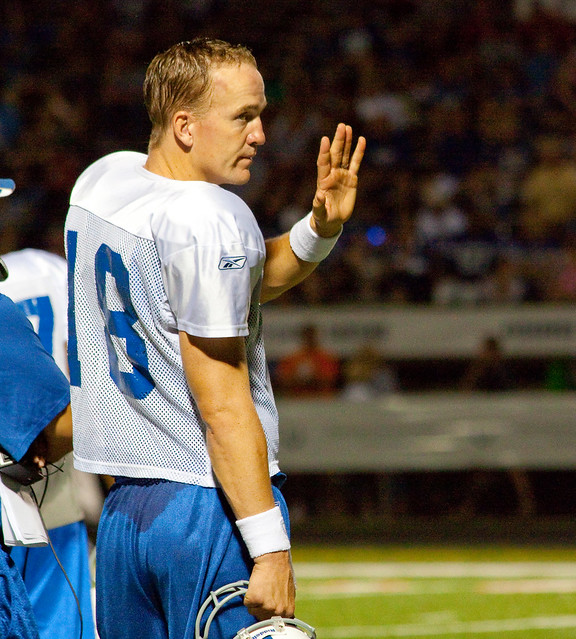 If I had to answer the same question again, a month later and two games into the post-season, I’d say those things again. But I’d also have to say, “It’s complicated.” Because Peyton will always be my favorite football player. Always. If there was no Peyton Manning, I promise you, there would be no football-loving Angie. I know this, and as corny as it sounds, my life would be so different. I’ve cultivated relationships I treasure that would have only occurred with football. I’ve had opportunities I would have never dreamed of. And for five months out of every year, one of my greatest joys is sitting on the couch with my husband and watching football together. That all goes back to Peyton. 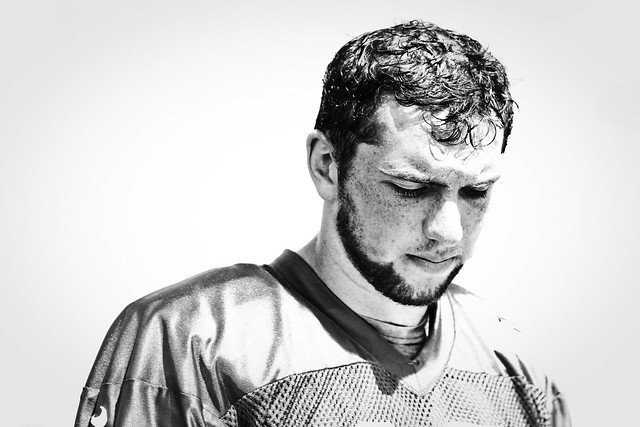 I can’t say that about Andrew Luck. But that doesn’t mean I won’t feel a different affection for him as the years go on. For as much as I love Peyton, he’ll always be that guy that broke up with me. Sure, sure, it was the “It’s not you, it’s me” routine, but a breakup is a breakup. It will always hurt deep down inside. Maybe this how I deal with losing my all-time favorite player to another team: I set boundaries. I can still love everything Peyton Manning was and is to me. What I can’t do is root for him over my team. Andrew Luck? He’s not my rebound guy anymore. He’s the one. He’s the one that makes me smile, with his adorkable personality. He’s the one that will help me make that transition to football without Peyton, whenever that day comes (which I’m fervently hoping isn’t right around the corner).

And maybe this year, if my gut is right, he’s the one to get us that Lombardi trophy again.