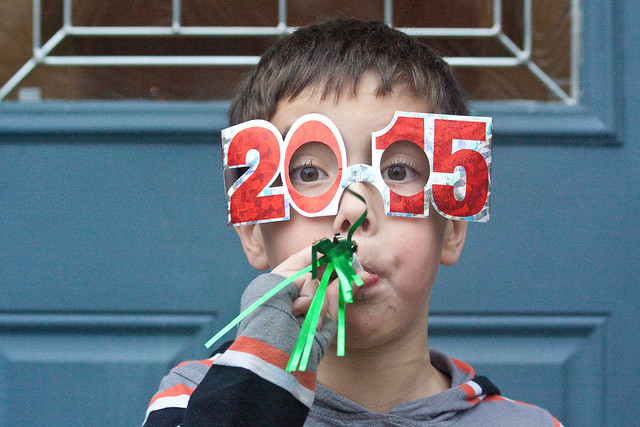 Since having kids, whenever I get asked, “What are your plans for New Year’s Eve?” I have to resist the urge to make a Princess Kate face:

While we were never the get dressed up and go to a fancy party types, we had our share of epic New Year’s Eve celebrations in our day. And then we became parents. Until the kids hit the elementary school stage, it was a struggle to even make it up to midnight. If we did last until 12:05, we paid for it dearly the next day. Nothing says “This will be our best year as parents ever!” like nursing a hangover or barking at your kids because you only got 4 hours of sleep on January 1st.

Now we have kids who can a) make it to midnight and b) sleep in the next morning (or at least let us sleep in without burning the house down), and so we can let the little party animals celebrate New Year’s Eve the way it’s meant to be celebrated: with food, music, friends, and tomfoolery. 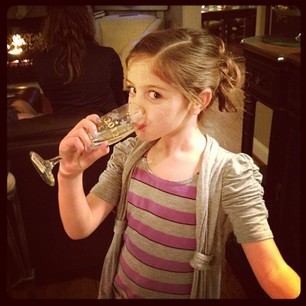 For me, New Year’s Eve isn’t the night for a fancy, sit-down dinner. It’s a night for food that you can grab whenever you get tired of dancing or in between games. Think plates of cheese, cured meats, a big batch of seasoned popcorn, chex mix, chocolate covered pretzels. I’d like to say I’d put out veggies and dip … but who am I kidding? No one wants carrots on New Year’s Eve. There will be fruit, but you have to wait for more details on that one. I’m also thinking this crispy, bar-style pizza will make an appearance. We’ve been hooked on it lately, and the kids swear it tastes just like Hot Box.

These are the nights Spotify playlists were made for. We have one just for parties … and by parties we mean dance parties. We might look like fools, but we love to move it, move it. It helps make up for the lack of a veggie tray, too. If the thought of making up your own moves scares you, pop a game like Just Dance

in and have a family dance-off. Just make sure if you’ve birthed any of the children at the party you make a quick trip to the bathroom first. I know you know what I’m talking about. And you’re welcome.

This is the perfect time to invite friends over for a family slumber party. No one wants to worry about driving home after the ball drops. It doesn’t have to be a bed and breakfast experience for your guests. We’ve had kids on the couches and adults on an air mattress, with cereal and grocery store doughnuts the next morning. As long as there’s coffee and no one laughs at your bedhead, it’s all good. If you can’t convince any of your grown-up friends to sleep over, let the kids each have a friend spend the night. Perhaps next year their parents will feel guilty and for the first time in 12 years YOU can have a New Year’s Eve without the littles. 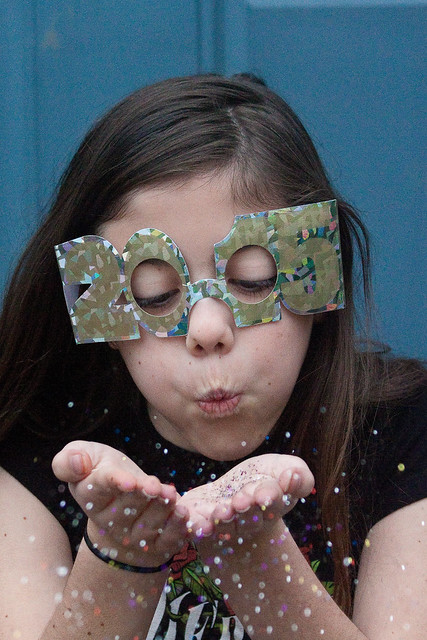 We love having a game marathon on New Year’s Eve. Pull out all your favorite games, and ask any guests to bring their favorite game, too. Set up a few tables and let people move around and play around.

When it’s time for the ball to drop, pull some fun accessories out of your party hat. I like to stock up on glow sticks and sparklers in the summer. Noisemakers and silly hats or glasses are a big hit. Finally, when the clock strikes midnight, it’s time to pull out those grapes!

Yes, grapes at midnight have been a tradition in my house for as long as I can remember. It’s a Spanish tradition (and superstition) that in order to have a 12 months of luck in the coming year, you must eat 12 grapes – one at each stroke of the clock at midnight. Before the party, pre-fill small cups with 12 grapes each and then pass them out to your guests just before midnight. It’s perfect for those of us that dislike champagne and awkward kissing!

No matter how you celebrate, I hope you have a wonderful New Year’s Eve and a fabulous 2015. If you haven’t discovered it already, be sure to introduce your little party animals to one of the original party animals: King Julian from Madagascar. “All Hail King Julian,” a Netflix-original series, debuted December 19th. If your kids are anything like mine, they’ll love his crazy adventures and silly antics!