It’s come to the time when we must retire the #SixesInSpain hashtag. No more Instagram pictures of old things and fried sea creatures. Nope, it’s back to your regularly scheduled programming. In this case that means laundry, a case of jet lag I just can’t shake, and a stack of People magazines that missed me very much while I was gone. 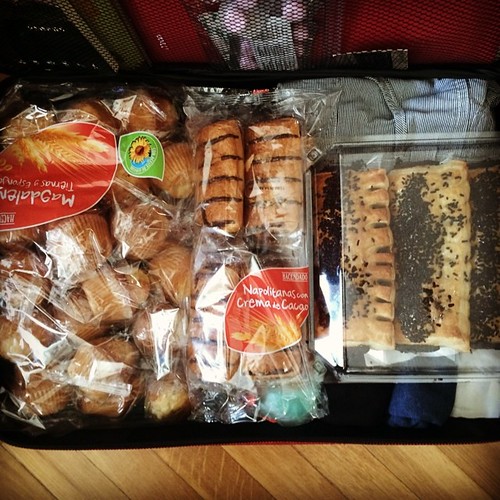 We had an absolutely wonderful trip. We didn’t lose anybody, we didn’t fall trap to pickpockets, our accommodations always met or exceeded our expectations, and we saw amazing things we’ll never forget. We reconnected with family that could host the Queen of England and not disappoint her, and met fascinating people from all walks of life. I teeter between being totally satisfied with the length of our trip and everything we did, to being crushed that we didn’t have more time to do more, see more, and (frankly) eat more. As I go through my photos I feel the same thing. So many amazing pictures! And yet, how did I manage to not take more pictures of family, or the delicious things I ate that are just distant memories already? I guess that’s how the travel bug gets you … there’s always more to see and do, yet the call of your own bed and the comforts of home trump another week of adventure.

As if the travel gods wanted to drive home the point that vacation was OVER, we had a grueling trip home. Our flight from Madrid to DC went very smoothly, and we glided through Customs in less than 30 minutes. We had a 3 1/2 hour layover scheduled in DC before next flight was to leave for Philadelphia. That was to be followed by a short layover in Philadelphia before our last leg home. I was worried about the layover in Philly. If all went according to plan, we’d be ok. But if we faced any kind of delay, we were looking at either running like hell through the terminal or missing our flight altogether.

As the time for our next flight approached, it became clear that all wasn’t going to go as planned. Flights out of DC were being delayed right and left. Our flight time got pushed back over and over again, until it became painfully clear that we would not be making that last flight to Indy. By this point the kids and I have been up for close to 20 hours. There is a time to decry the horrible things that screens and technology do to our children … this was not that time. God bless Steve Jobs, for his Apple products kept my children quiet and happy, even while their mother was weeping and rocking in the corner of Gate C22.

The glitch in this travel plan was that my last leg from Philly to Indy was a completely different airline and reservation. So when we missed that connecting flight, neither airline knew quite what to do with us. Mike was on the phone from Indy, and I was working both the phone and the United customer service desk in DC. We talked to at least 6 different people, and got 6 completely different answers. There was a flight from DC to Indy leaving later in the evening. United told me there was room, and I could certainly take that flight instead … for $1200. US Airways could only help us once we got to Philly.

As the kids and I sat buckled in our flight from DC to Philly, 3 hours after it was initially supposed to take off and 7 hours after we’d landed in DC, Mike texted me that they could get us on that direct flight to Indy. But I was DONE. Eli was already passed out on my lap. I said a little prayer it would all work out, thought some very bad things about the jerkwads at United that couldn’t have figured that out in the 4 hours they had to do so, and we were on our way to Philly.

Thankfully, the United rep in Philly was the first kind and helpful person I’d dealt with. I think she could see the exhaustion and crazy in my eyes. Eli passed out on the nasty airport carpeting was a nice visual reminder for her, too. She got us a hotel room in Philly near the airport, food vouchers for the morning, and a flight to Indy at 10 am the next morning. I’ve never been so happy to touch down amid a sea of corn in my entire life. 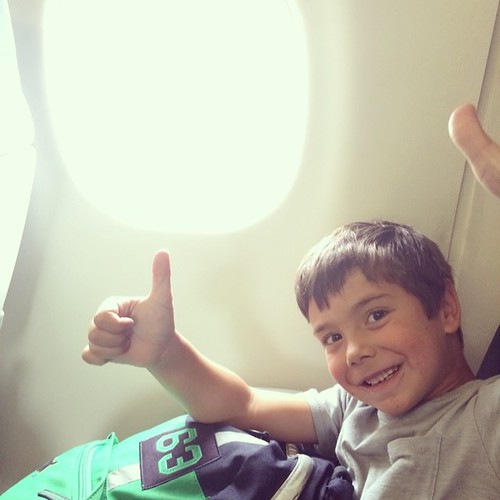 I have so many thoughts, photos and stories to share with you about this trip. I’ll do it gradually over the summer so as not to overwhelm you with all things Spain and London. In the meantime, it will take me awhile to get back to a normal routine again. Bear with me if posting is erratic for the next couple of weeks. Thanks so much for continuing to read, and for going along on this wonderful adventure with us!