Today my not-so-little girl turns 11.  In honor of  her birthday, I thought I would share 11 things about Elena.

During my entire pregnancy, I ate ate least 3 black bean burritos from Baja Fresh a week.  It got to the point where I’d waddle into the joint and the guy would start making my burrito without a word.  In the hospital, Elena nursed and slept like a dream the first day.  For dinner that evening I begged Mike to run out and get me a black bean burrito.  That night, she wailed non-stop.  That’s pretty much how she feels about black beans to this day.

Elena’s first word was “hi.”  Her second word was “noodle.”  Yes, she valued the beloved Kraft mac-and-cheese noodle so much that she learned to say it before “mama” or “dada.”  Eleven years later she still would probably list her heirarchy of needs in that order:  social, food, mom and dad. 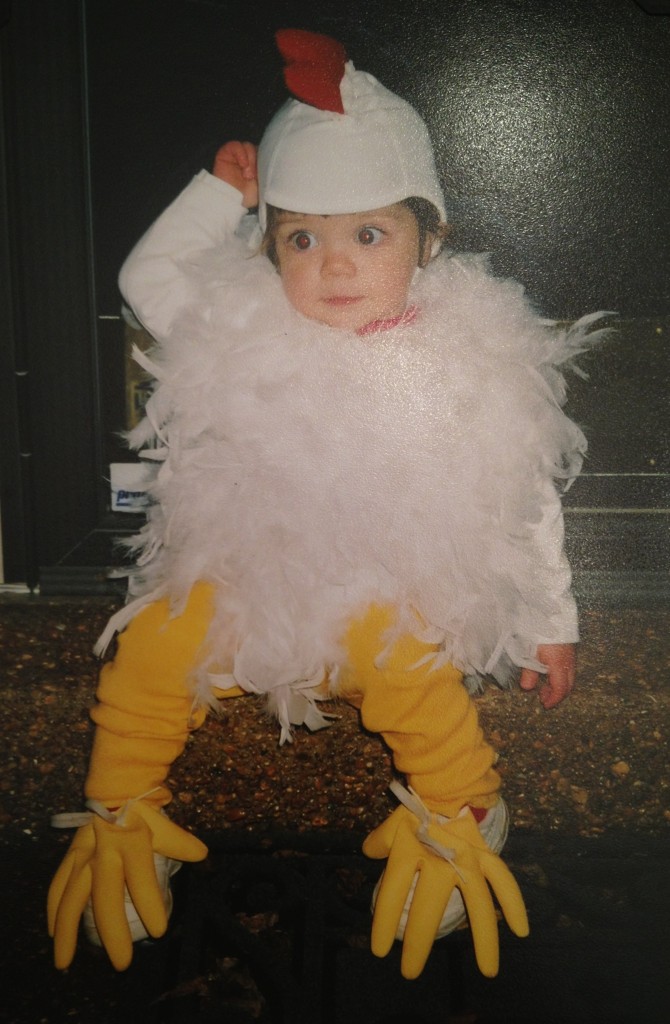 My favorite Halloween costume we’ve ever put a kid in was the year Elena was 1 1/2 and we dressed her up like a chicken.  While the kids around her were crying or trying to rip their costumes off, she strutted around, saying “bawk bawk” instead of “trick-or-treat.”  I get these crazy ideas we just have to try, like this chicken costume.  She might not always be too sure about it, but she’s always game to go along with me.

In her first year of preschool, we had a parent/teacher conference where one of the topics of concern was her dogged determination to do the monkey bars.  They feared she was too tiny, and that she would hurt herself.  She was, she didn’t, and she made those monkey bars her boss.

For years, Elena’s birthday request was always a trip to MCL, a local cafeteria-style place with home-cooked food.  One year she was SO excited because the room next to our table was all decorated for a birthday.  Someone else was celebrating their birthday at MCL too!!  That someone else was a lovely lady turning 90.  I do believe that was the last year Elena chose MCL for her birthday dinner. I’ve never met a bigger carnivore, unless you count the tigers we met on our tour of the Big Cat Rescue Center.  The bigger the hunk, and the bloodier, the better.  She’s attempted the Big Ugly at Bub’s twice, and almost finished it, even though it almost killed her.  And when we moved on from the MCL birthday dinner, what did she want?  A steak dinner at Harry & Izzy’s.  I have no idea what kind of boys she’ll bring home, but I guarantee you he won’t be a vegan. She has her own sense of style, and she is comfortable enough in her own skin to be her goofy self without worrying what others think.  If someone thinks that what she likes is dumb or that she looks silly, she shrugs it off and moves on.  Haters gonna hate and she’s too busy liking blue hair and unicorns. We are in full boy-band frenzy now.  It gathered steam with Big Time Rush and now it’s reached a fever pitch with One Direction.  My mom bought her a full-size Niall, her favorite guy from the band.  She moves him around the house, so they can always be close.  I react about as well when I flip on the light and find myself face-to-face with her cardboard boyfriend as I would if I walked in on her with a real boy.

I’ve taken photography classes, pored over tutorials, and practiced for years.  Elena picks up the camera and just shoots.  I love going through the photos and seeing the world through her eyes.  She instinctively knows what will make a good picture.  She can take something as boring as our car radio and make it look interesting. And then she takes a photo that takes your breath away. She’s growing into such a nurturing soul.  I’ve seen it in the way she’s stepped in to care for me when I’m sick, when she’s helping Eli, and when she gets the chance to love on other people’s little ones.  She’s taking a Safe Sitter class in a few weeks and she’s so excited to get her first babysitting jobs.

Speaking of growing, she can fit into my shoes now.  Sometimes I get annoyed, when I walk into my closet for that one pair of flip flops, only to find them on her feet instead.  But mostly I’m giddy with possibility … yes, I do think she needs those snazzy sandals.  And what do you know?  They match my outfit perfectly!  Now if only I could get myself into a those skinny jeans in a kids size 10.

Eleven years ago we greeted the morning with a new baby, feeling giddy, blessed, full of love, and clueless about what to do next.  I woke up this morning feeling exactly the same way, only my baby isn’t so little anymore.  Happy birthday, Elena.  We love eleventy-billion things about you!