The kids and I are headed to Seacrest Beach (near Destin) for a week later today.  My mom is driving down to Nashville with me tonight, where we'll spend a day visiting with my brother and some friends.  My sister, my niece and her 2 kids (ages 4 and 1) are driving down tomorrow.  On Sunday we'll caravan down to the beach.  Yes, we have lost our minds.  Mike will be stuck here working, so if you really like me,  feel free to call and nag him about projects around the house or to drop off your kids for some free babysitting!  We've had some fun in the last few days, so I wanted to just post a couple of quick pics before we left.

On Wednesday the kids and I took the Fair Train down to the opening day of the Indiana State Fair.  Instead of driving to the fair and paying for parking, you park at the train station and ride the train there and back.  It's 5 minutes from our house, so it's a no-brainer.  I LOOOOOVE the fair, and missed it last year, so I was so excited.  I hadn't had my fried food quota and that is just plain wrong.  For those of you who don't know, my dad is a volunteer for the Indiana Transportation Museum, which is in charge of the fair train.  He's very proud (as he should be!) as this year he completed training to become an engineer.  Which means he can drive the train, which means his grandkids think he is cooler than cool.  Unfortunately a few days before the start of the fair, he had a nasty accident while replacing railroad ties – one fell on his hand, crushing some bones in his thumb.  He was lucky(!?), as it could have been his whole hand or foot, but it still put him out of commission for awhile.  Even though he wasn't working that day, he met us at the station and rode the train down to the fair with us.  Eli loved the train ride, especially the part where Grandpa fed him chips. 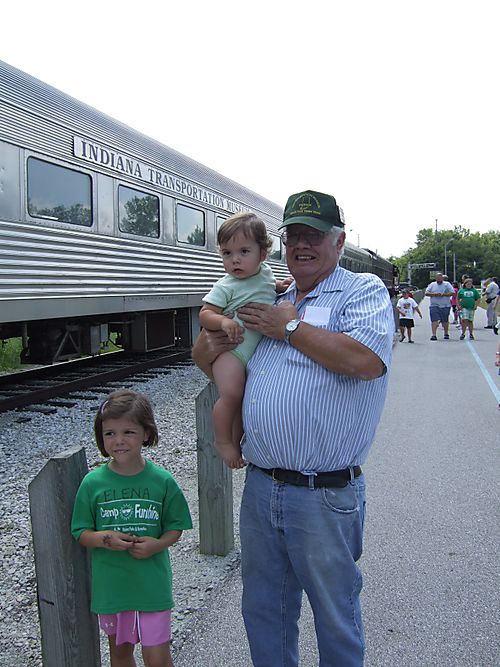 Our fair menu?  Lamb kebabs (positioned right outside of the sheep barn . . . hmmm), dippin dots, fried pickles, grilled cheese and milkshakes from the dairy barn, and a sno-cone.  I really wanted an elephant ear, but I just couldn't do it.

On Thursday our baby playgroup had a group party for all the babies.  All of them turn one between now and early September.  Our lovely host, Jessica, made a healthy cake for the babies.  We lined them all up and let them go to down.  Here they are! 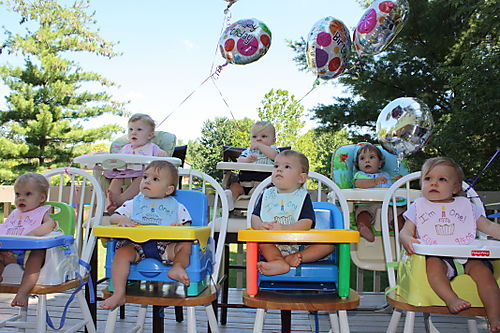 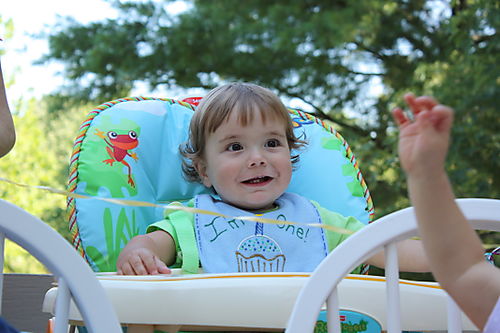 And finally, I thought I'd post of picture of our very hungry caterpillars, who got big and fat and then decided to make themselves a chrysalis.  We are amazed. 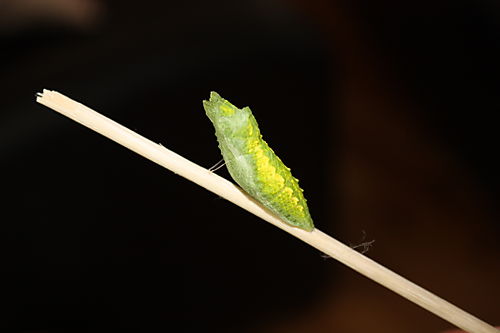 Isn't it cool?  They made them overnight.  You can even see the very thin strand of silk where he's attached himself to the stick.  Sadly, I think they will emerge while we are at the beach.  We're leaving it up to Mike to either take care of them until we get back, or take lots of pictures and release them for us.  Keep your fingers crossed for us.

So much for a short post.  I'll do anything to avoid packing until the very last minute.  I won't be able to post any pictures until we get back, but I'll try to do some short posts here and there.