Unbeknownest to us at the time, Friday would be our last day at the beach.   We hung around the pool in the morning, since we had plans to go to the beach at Grayton Beach State Park in the afternoon.  We came in for lunch, and the girls hurried through theirs in anticipation of getting into the pool.  Since we were in a quiet neighborhood, we'd been letting them play outside unsupervised throughout the week.  They had done well, until today!

They were playing outside while we finished lunch.  Danielle went downstairs for something, only to find Kiersten changing out of her wet bathing suit and back into her dry clothes, which was suspicious seeing as how Kiersten hadn't been swimming yet that morning!  Apparently the girls had decided to go on to the pool without us.  We had no choice but to ground them from the pool for the rest of the day.  They stayed at the house with my mom, while Danielle and I took the babies to the pool.  One of the families at the pool gave us the play-by-play of the whole situation as it unfolded.  The girls had come to the pool with swimming on their minds:  Elena brought her mermaid flipper and goggles and Kiersten brought her life vest (at least they were prepared!).  They introduced themselves to everyone at the pool.  When one of the adults asked the girls if their parents knew they were at the pool, Elena offered an emphatic "Yes!"  Kiersten poked Elena and said, "No they don't!"  Elena jumped right in and began swimming, while Kiersten stood forlornly by the side.  Elena prodded her to get in, but Kiersten kept saying, "But my mom will see my wet suit!"  Finally fun won out over reason and Kiersten got in, too.  She played it safe and just went around the edge of the pool a few times.  And to think, they were oh so close to pulling it all off.

While we swam with the babies, the girls played on the balcony.  We were close enough to the house that you can hear virtually everything being said on the porch.  At one point, trying the power of positive thinking, the girls yelled over, "WE'RE HAVING A GREAT TIME!!!!!"  To which Danielle and I replied, "So are we, right here in the pool!"  Silence . . . "IT'S NOT FAAAIIIIRRR!"

In the late afternoon we grabbed dinner to go and drove over to Grayton Beach State Park for a picnic and pictures.  The pictures turned out ok (I did  the best I could.  I needed a baby wrangler – Eli would only sit in the sand for milliseconds and then he was off).  The picnic was anything but idyllic.  Half of us were attacked by fire ants.  Eli only wanted to throw food.  And Elena wouldn't stop bitching about sand on her pizza.  Ahh, but don't we look idyllic in photos?? 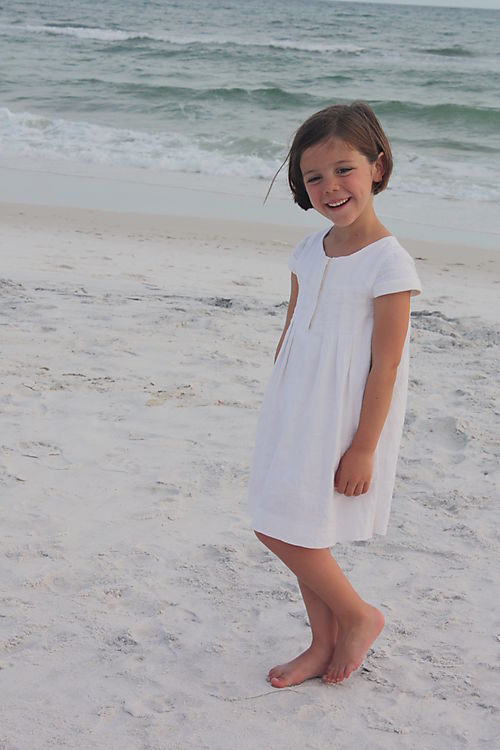 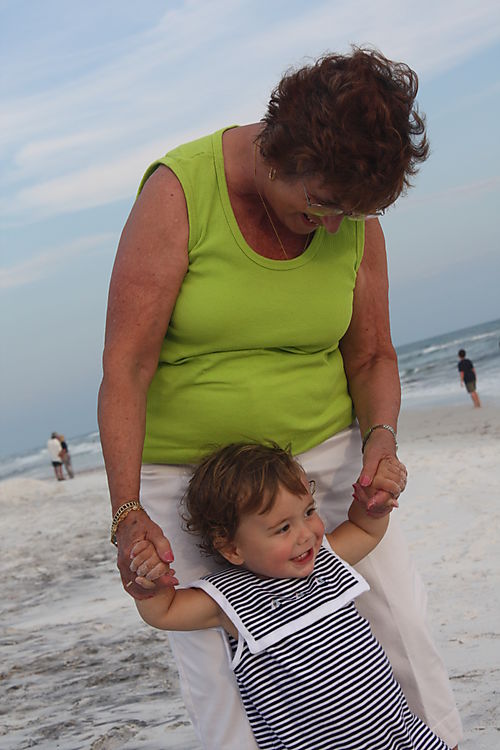 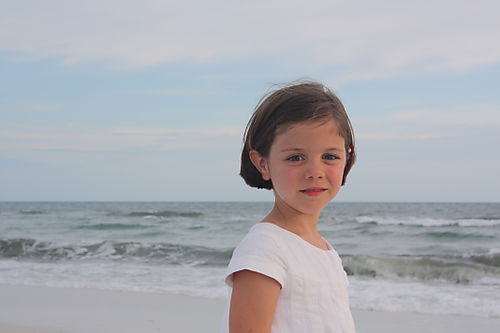 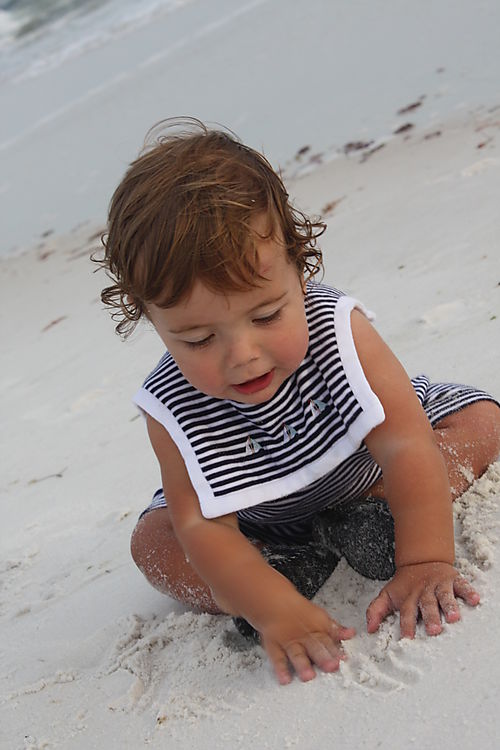 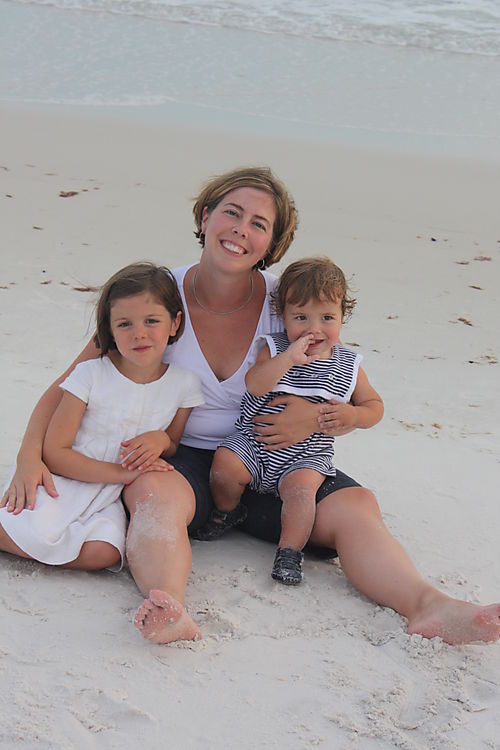 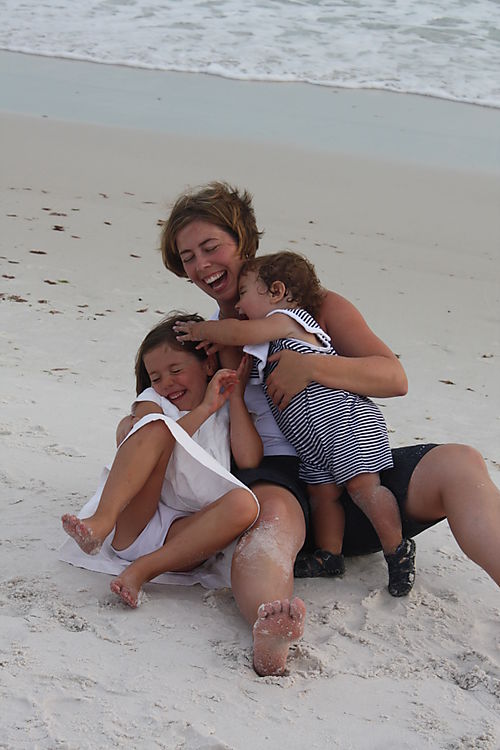 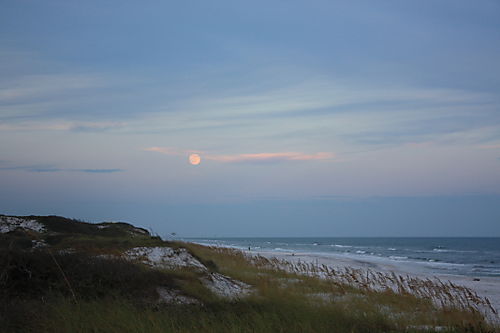 I love this one of Elena – the moon, the contrast of the color, her expression: 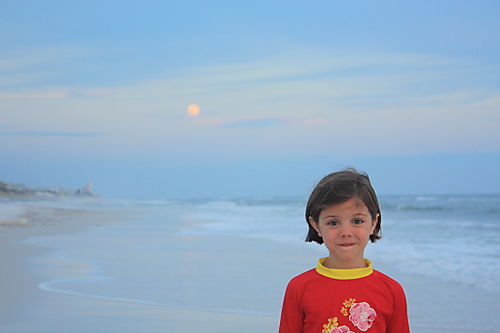 And a few cute ones of Olivia and Elena.  Doing their best impression of Jeff Saturday and Peyton Manning: 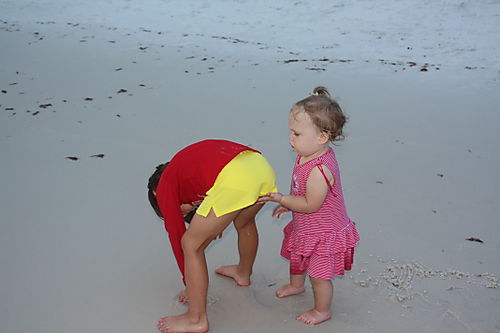 Thankfully Peyton never does this to Jeff: 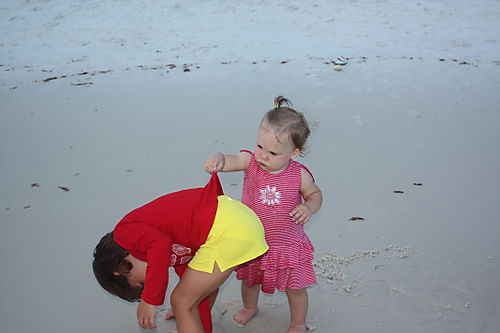 Squeezing every last minute out of the beach: 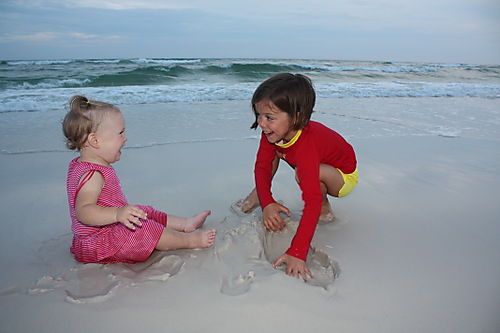 Our plans to stay Saturday were thwarted by rain, rain and more rain.  Then again, since we only missed Fay by a week, I'm thinking we have no idea what real rain is.  We made it out by 2 p.m and were in Nashville late that evening.  By late afternoon on Sunday we were back in our home.  Was it a perfect trip?  No, but is there such a thing, especially with kids?  It will be the first beach trip of Elena's life that she may actually remember, and I hope she tucked away a few good memories.  I hope one day she recognizes how lucky she is, to have cousins roughly her age to pal around with, something Mike and I never had.   The time the kids got to spend with my mom was priceless.  I'm already working on Mike, planning and scheming for another beach fix next spring or summer.