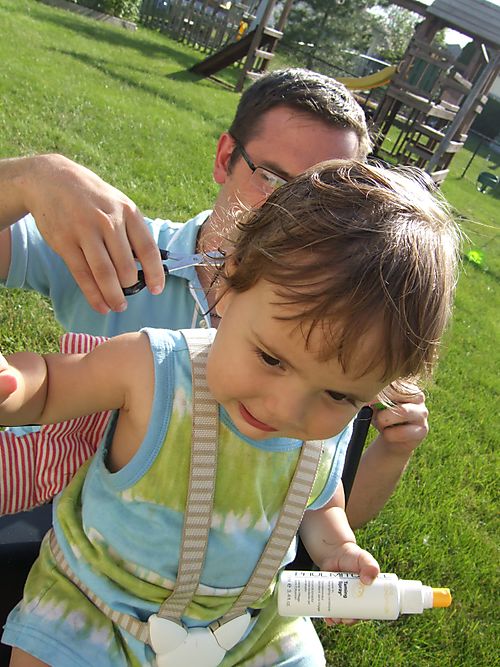 A haircut for my bubby.  I knew it was time when I had to physically restrain myself from grabbing one of Elena’s little clips to keep his bangs out of his eyes.  We just trimmed up his bangs and evened up the back, nothing radical.  There’s no way I could get rid of the curls around his ears yet.  Would you believe I totally spaced it and didn’t save a lock of hair for his baby book?

No major developments in the garden this week.  The green beans seem to be taking off now, so next time we want some we’ll each get 2 or 3 instead of having to split one.  The other day when I brought in some zinnias for the table, Elena picked some carrot greens to add to the vase.  Later on I noticed some black specks on the leaves and realized they were some kind of worm.  My first reaction wasn’t “Oh, how cool!”  It was more along the lines of “Ick.”  Priorities called me away from dealing with it, and the next time I took a look they had grown quite a bit and I realized it was some kind of caterpillar.  Elena put them in her bug viewer and they’ve been growing and doing quite well.  We figured out that they are black swallowtail caterpillars.  We’re doing our best to keep them happy in hopes that they’ll turn into butterflies.  I’ll try to get a picture or two up here this week.  In the meantime we have carrots.  They’re not the tastiest carrots I’ve ever had, but they are pretty: 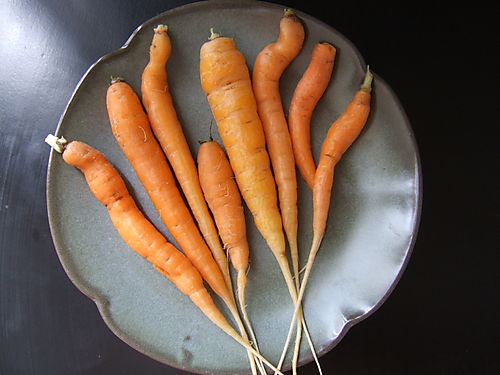 I’m hoping that soon you’ll see a drastic improvement in picture quality.  Mike and I went camera shopping yesterday and we’re making the jump from our point-and-shoot to a digital SLR.  Thanks to everyone who gave us their two cents on how to choose a camera.  The Canon EOS Digital Rebel XSi won out over the Nikon D80.  I’m hoping it’s here and I have a few basics down for the BIG EVENT next weekend:  Eli’s 1st Birthday!