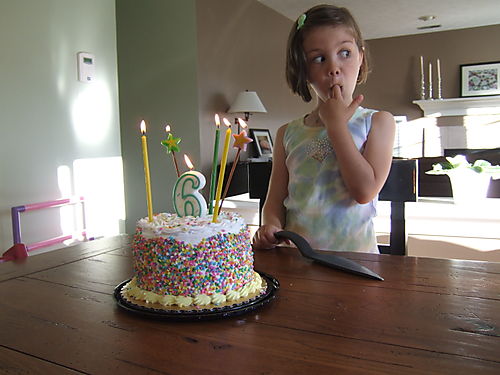 Elena Six is six . . . I can scarcely believe it.  While it seems like a million years ago that I was a brand new mom to a squalling baby girl, it still doesn’t seem quite possible that I could be the mom of a first grader.  But here I am, six years older myself and in awe of this little girl.

As is tradition in our family, the birthday person gets to select their meals for the day.  For Elena it was donuts for breakfast, Kraft mac-n-cheese and salami for lunch, and for dinner?  Same as last year:  MCL Cafeteria, or “Pass The Trays” as it’s known to her.  Once again we were by far the youngest people there.  Elena chose fried chicken, mac-n-cheese, corn-on-the-cob and strawberry jello.  She’s a fancy one, that girl.

So what is Elena like at six?  Of all the pictures we took on and around her birthday, this is the one that seems to capture her best.  Six is pretty much knowing the rules and what’s expected of you, but just a smidgen of self-control away from actually doing it.  But yet smart enough to know that you better be on your toes to make sure no one is watching you do what you’re not supposed to do.  It’s the struggle between wanting to still be little and wanting to be all grown up, which at this point would entail walking to the park by yourself or playing on the cul-de-sac where mom and dad can’t watch your every move.  It’s being a whirlwind of curiosity, fueled by the fact that you’re a real reader now.  Reading, asking, listening, writing, and reading some more until you finally pass out exhausted at the end of the day, an open book resting on your chest.  It’s Drama, Drama, Drama . . . a preview of what’s to come at 16, that already leaves your dad dazed and shell-shocked, wondering what he could have possibly said that was so wrong? It’s sweetness and caring, in the way you dote on Eli, like a little mother hen.  It’s a blessing to those who love you so.